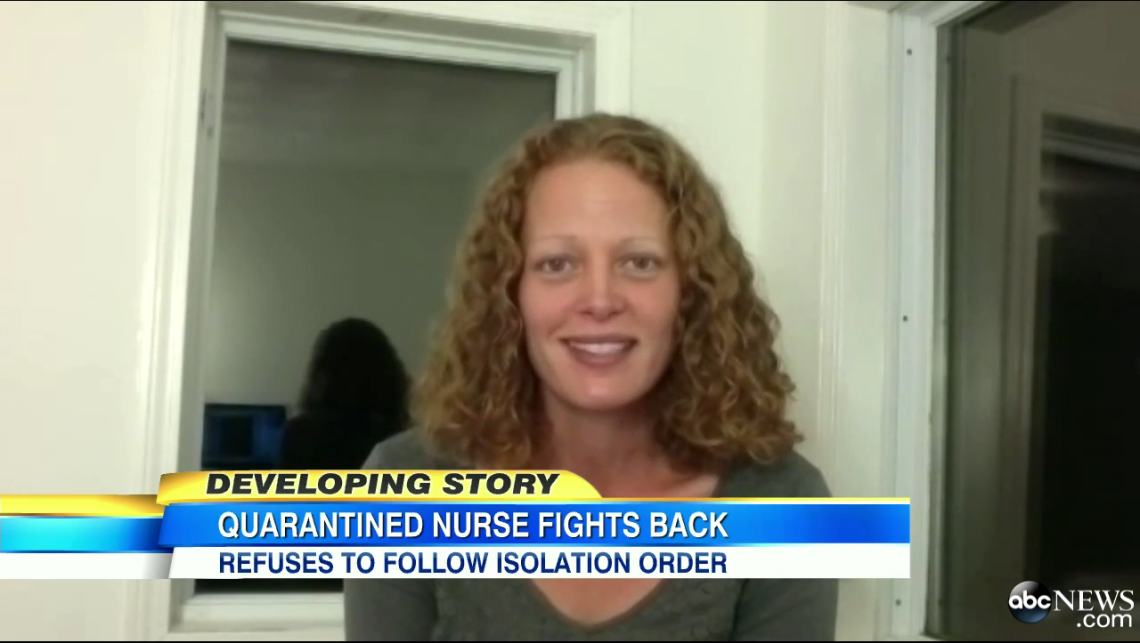 Another day, another self-diagnosis contradicting state law. Kaci Hickox, a nurse who volunteered to fight Ebola in Sierra Leone and registered a fever just three days ago, was sent to quarantine for 21 days on her return to the U.S.—first by the state of New Jersey and, most recently, by the state of Maine.

But according to NBC News, she’s not listening.

The Maine nurse, openly defying an order to stay home after she treated patients in West Africa, sped off on a bike ride on a sunny morning with her boyfriend, Ted Wilbur. She returned after about an hour.

“I hope that we can continue negotiations and work this out amicably,” Hickox told reporters. “There is no legal action against me, so I’m free to go on a bike ride in my hometown.”

Authorities in Maine are pursuing a court order to enforce the quarantine through Nov. 10. Hickox says she is completely healthy and free of symptoms, and that the quarantine is unnecessary and unconstitutional.

They say doctors are the worst patients and this seems to prove it. It also seems that most medical personnel who’ve had contact with her think it’s unlikely she has Ebola. Or course, if they were sure she had Ebola then they’d be treating her. But there’s always the chance she does have it. Thus, the 21-day quarantine which is intended to guard public safety.

Hickox thinks New Jersey and now Maine are being unscientific and overreacting even though home quarantine is exactly what everyone else exposed to Ebola has had to endure. The governors of New Jersey and Maine say it’s their responsibility to protect people’s lives from disease, and they’re correct.

This is all being hashed out and it looks like Maine’s governor may force her into quarantine. In the meantime, she’s pissing a lot of people off.

“Her behavior is really riling a lot of people up,” he said.

He said he hoped for legal clarification later in the day on enforcing restrictions on her movement. The governor said he was looking out for the 1.3 million people of Maine.

“I don’t want her within three feet of anyone,” he said.

Oh and she’s out shaking hands with people just to show ’em.

Hickox flouted (Maine Governor) LePage’s 3-feet requirement on Wednesday when she shook hands with a reporter while cops watched.

“You could hug me, you could shake my hand,” she said, the Portland Press-Herald reported. “I would not give you Ebola.”

It’s rugged individualism v. government responsibility in a battle that promises to consume us all and have everyone hating Kaci Hickox until the end of time.

And here’s my alternate Onion-style title:

There’s A New Ebola Victim In The U.S., It’s Spread To At Least One Healthcare Worker