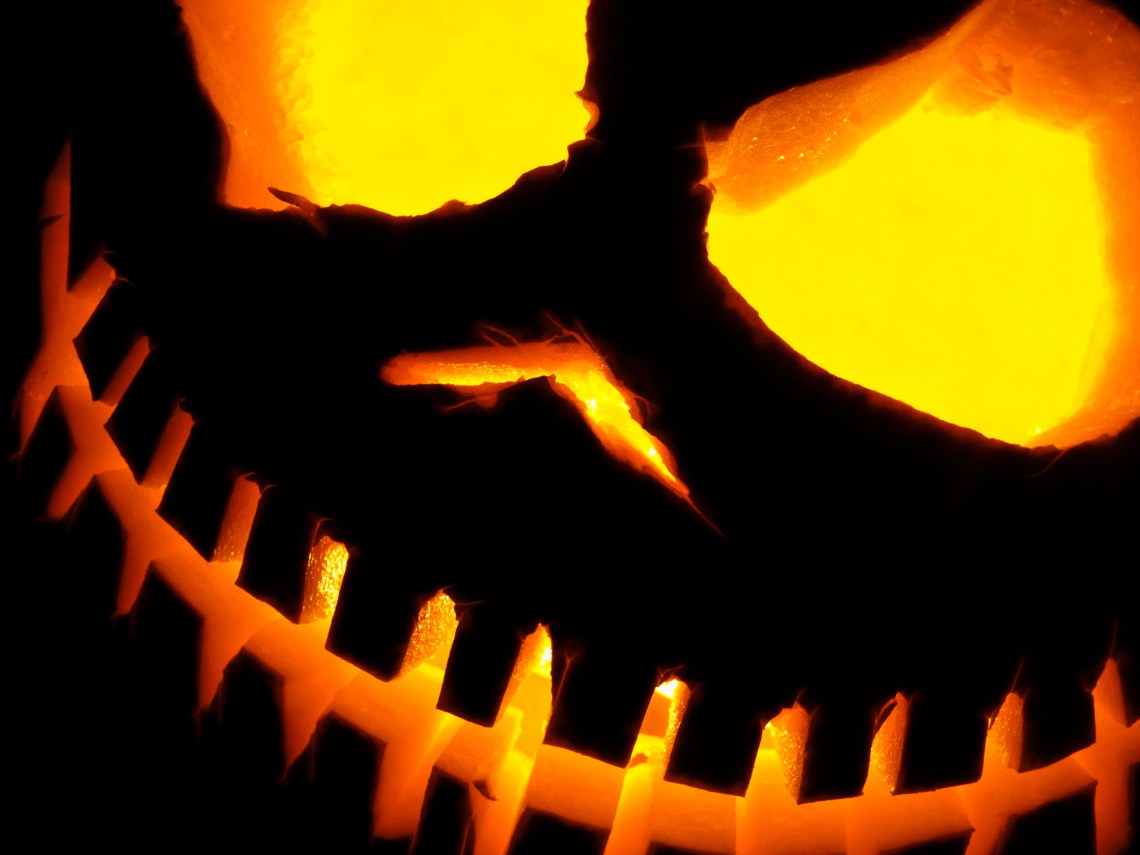 Our modern celebration of Halloween is a descendant of the ancient Celtic fire festival “Samhain” (pronounced “sow-in”) which was also known as “All Hallowtide”. This was a festival marking the end of harvest and the beginning of winter. The end of summer was significant to the Celts because it meant the time of year when the structure of their lives changed drastically. The cattle were brought down from the summer pastures in the hills and the people were gathered into the houses for the long winter nights of storytelling and craftworks for the coming year.

Samhain was the final harvest of the year. Anything left on the vines or in the fields after this date was considered blasted by the fairies, or “pu’ka”, and unfit for human consumption. The Samhain festival would last for approximately 3 days.

Much later down the timeline of the history of Halloween, a Christian feast day dedicated to the Virgin Mary and the martyrs was moved to November 1st from May 13th by the Roman Catholic Church in 835 AD in order to mark the dedication of the All Saints Chapel in Rome, establishing November 1st as ‘All Saints Day’ and October 31st as “All Hallow Even”, eventually “All Hallow’s Eve”, “Hallowe’en”, and then – “Halloween”.

The Celts and The Druids

On Nov. 1 (All Saint’s Day) the disembodied spirits of all those who had died throughout the preceding year would come back in search of living bodies to possess for the next year. It was believed to be their only hope for the afterlife. The Celts believed all laws of space and time were suspended during this time, allowing the spirit world to intermingle with the living. Naturally, the still living did not want to be possessed. So on the night of October 31, villagers would extinguish the fires in their homes, to make them cold and undesirable. They would then dress up in all manner of ghoulish costumes and noisily paraded around the neighborhood, being as destructive as possible in order to frighten away spirits looking for bodies to possess.

The Druids would light new fires and offer sacrifices of crops and animals. As they danced around the fires, the season of the sun passed and the season of darkness would begin. When the morning arrived the Druids would give an ember from their fires to each family who would then take them home to start new cooking fires. These fires would keep the homes warm and free from evil spirits.

The Celts did not have demons and devils in their belief system. Fairies, however, were often considered hostile and dangerous to humans because they were seen as being resentful of men taking over their lands. On Halloween, the fairies were thought to sometimes trick humans into becoming lost in the fairy mounds, where they would be trapped forever or until the fairies decided to release them.

The Legend of the Jack-o-Lantern

The Jack-o-lantern custom comes from Irish folklore. As the tale is told, a man named Jack, who was notorious as a drunkard and trickster, tricked Satan into climbing a tree. Jack then carved an image of a cross in the tree’s trunk, trapping the devil up the tree. Jack made a deal with the devil that, if he would never tempt him again, he would promise to let him down the tree. According to the folk tale, after Jack died, he was denied entrance to Heaven because of his evil ways, but he was also denied access to Hell because he had tricked the devil. Instead, the devil gave him a single ember to light his way through the frigid darkness. The ember was placed inside a hollowed-out turnip to keep it glowing longer.

When the potato crop in Ireland failed (around the 1840’s) many of the Irish people, modern day descendants of the Celts, immigrated to America, bringing with them their folk practices, which are the remnants of the Celtic festival observances. This migration had a great impact on the history of Halloween. The first lighted fruit was really carved out of gourds and turnips (just like in the folk tale). European custom also included carving scary faces into the gourds and placing embers inside to light them. This was believed to ward off evil spirits, especially spirits which roamed the streets and countryside during All Hallows Eve. Once coming to America , they quickly discovered that pumpkins were bigger and easier to carve.

Growing big pumpkins is a big-time and serious hobby. Top prize money for the biggest giant pumpkin is as much as $25,000 dollars at fall festivals. The current world record for giant pumpkins is 1446 pounds. Of all fruits and vegetables, pumpkin is the best source of vitamin A. Just a half-cup of the orange stuff has more than three times the recommended daily requirement. The world’s fastest time to carve a face into a pumpkin is 54.72 seconds, by Stephen Clarke (USA), on October 23, 2001 (source: Guinness World Records) Besides orange, pumpkins also come in white, blue and green.

A traditional food eaten on Halloween is barnbrack, a kind of fruitcake that can be bought in stores or baked at home. A muslin-wrapped treat is baked inside the cake that, it is said, can foretell the eater’s future. If a ring is found, it means that the person will soon be wed; a piece of straw means that a prosperous year is on its way.

The witch is a central symbol of Halloween and is identified with the holiday throughout the history of Halloween. When setting out for a Sabbath, witches rubbed a sacred ointment made with an hallucinogenic herb onto their skin. This gave them a feeling of flying, and if they had been fasting they felt even giddier. Some witches rode on horseback, but poor witches went on foot and carried a broom or a pole to aid in vaulting over streams.

This custom of trick or treating is thought to have originated not with the Irish Celts, but with a ninth-century European custom called “souling”. On November 1, All Souls Day, early Christians would walk from village to village begging for “soul cakes,” made out of square pieces of bread with currants. The more soul cakes the beggars would receive, the more prayers they would promise to say on behalf of the dead relatives of the donors. At the time, it was believed that the dead remained in limbo for a time after death, and that prayer, even by strangers, could expedite a soul’s passage to heaven.

Halloween is the 2nd most commercially successful holiday, with Christmas being the first. Halloween candy sales average about 2 billion dollars annually in the United States. With an estimated $1.93 billion in candy sales, Halloween is the sweetest holiday of the year (beating out Easter, Valentine’s Day, and Christmas). In fact, one quarter of all the candy sold each year is purchased between September 15 and November 10.