I lied, stole from my parents, cheated, scammed, humiliated others and laughed, threw rocks at people with the intent to kill. All by the time I was 10 years old.

Later it got much worse. Later I actually thought I was smart.

This is the great thing about being young: you’re so arrogant and stupid and unreasonably confident that you have 100% confidence that everything you do will fit right into the picture.

A million piece jigsaw puzzle where you never pick up the wrong piece as you try to put it in the right position.

But this part is good: you have no money, so it’s really hard to blow it. And if you destroy a relationship, then good for you – you were too young anyway.

And they all said yes. That’s how stupid we all were then. It was like the convention of stupid. StupaCon.

Fortunately we were all so stupid and broke that nothing ever happened.

Here’s the truth: you can’t fail as a kid. I sometimes get messages like, “I’m 23 and I failed and now I don’t know what to do.”

Just do the next thing. That’s all you have to do. Regret of the past or anxiety of the future are the thieves of the present.

And don’t do “failure pornography.” You don’t get to succeed now because you failed. You’re not Luke Skywalker.

You get to succeed because if you do enough bad things in a row with the intention of doing a good thing, then eventually you get lucky and a good thing happens.

You don’t meet the love of your life until you’re lonely and looking. You don’t invent “hand washing” until you realize that people are dying in hospitals when doctors don’t wash their hands.

You don’t get to be a brilliant musician until you’ve spent many hours being a bad one and trying to improve.

Every good creation in history was the child of really ugly parents.

Oh, and don’t make any of the mistakes in the attached infographic.

I wish I had this graphic when I was 18. I wish my kids would listen to this infographic.

Kids, if you ever listen to your father: print out this infographic, make it poster-size, hang it on your wall, and look at it every day. And say, “I love you, Daddy.”

I can say that because I know you won’t listen. How come?

Because you’re going to do many bad, stupid things and then, just by luck, good things will start to happen.

I hope so. I hope they will. If they don’t, then just do the next thing with hope and verve and that same zest you had before the arrogance was beaten out of you.

Oh. Don’t die though. Let me die first. I deserve at least that.

Tell me a mistake or two you made before age 25. Help my kids and others learn from you. 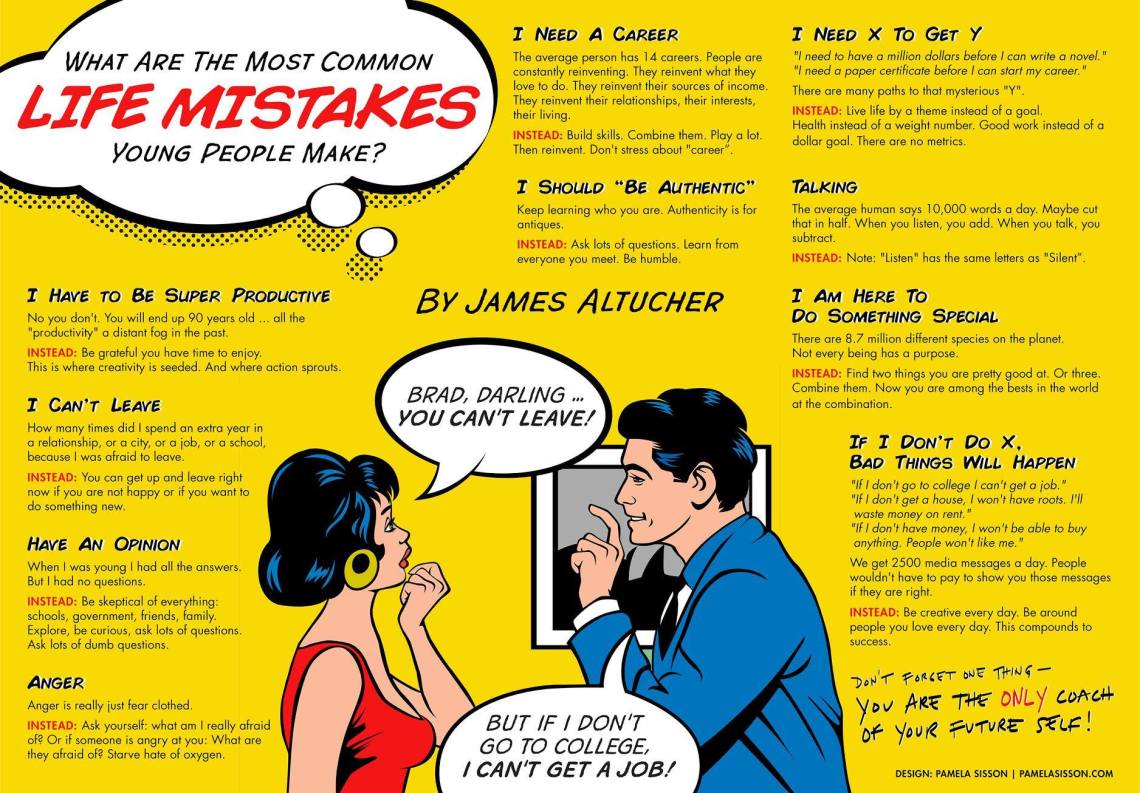 10 Ways You Can Be More Like The Dalai Lama

Why You Should Not Stay Single In Your 20s

What Are Some Ugly Truths?

4 Tragedies Of Life That 20-Somethings All Experience

How To Kick Ass Even If You Are Stupid