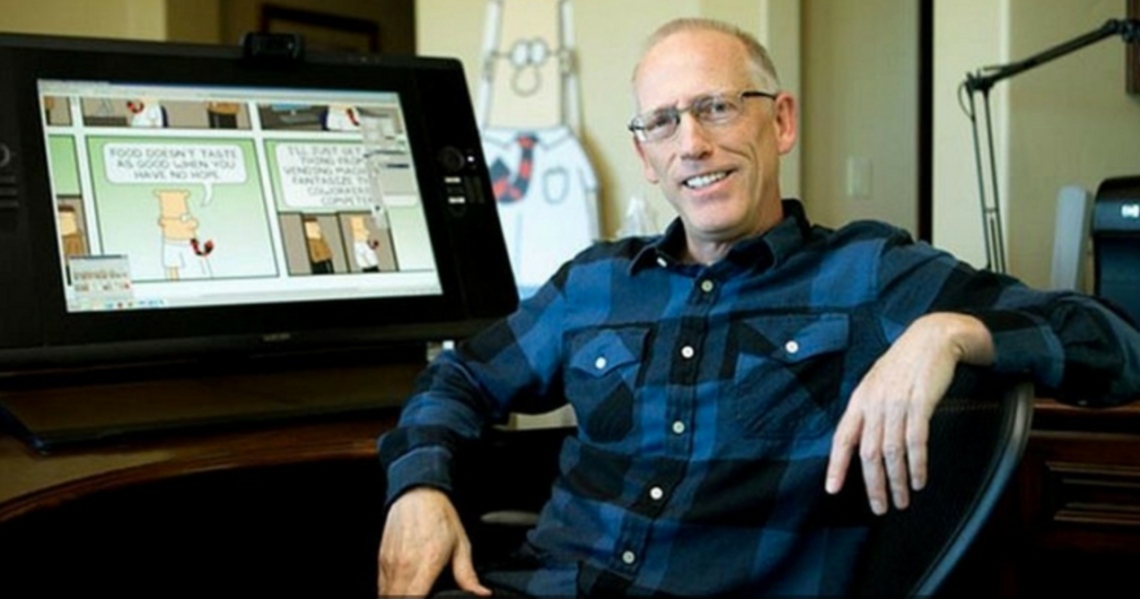 Scott Adams, the creator of Dilbert, knows the answer and has known it for years.

So I called him and asked. I needed to know. He told me how Trump won. And he told me how anyone can use these persuasion techniques to improve their lives.

What if you can get people to do whatever you want just by using the right words and subtly hypnotizing everyone you meet?

It sounds like a science fiction novel. But it’s true. It’s what happened, and it happens every day. Who are the victims? You’re the victim.

Scott Adams predicted in September 2015(!) that Donald Trump would become President because, “he is the best master persuader I have ever seen.”

Scott Adams trained as a hypnotist and master persuader for years.

“Once you realize that everyone is completely irrational,” Scott Adams told me, “your life gets a lot easier.

“You can start to use the principles behind this to see why people really do things, as opposed to using rational facts, and then use that to your advantage.

“Understanding that people are irrational has made my life a lot better.”

But how did he predict a year and a half ago that Trump would win? I needed to know how. And how I could do it.

But we can all learn the skills that Scott learned.

Scott heard a story that made him want to change his life in his 20s. His mother had delivered birth to his sister without the use of anesthetics.

She was hypnotized. “She felt no pain,” Scott said.

So Scott, in his 20s, learned all the techniques of hypnosis.

“You mean,” I said, “You can take a gold watch and swing it in front of their eyes and make them do what you want?”

“That has never happened,” Scott said, “Except in movies.

“What you learn is that basically everything people do is completely irrational. And then they rationalize it later.

“Like, they might say they voted for Trump because of his policies but this is just a rationalization. Everyone is irrational and everyone is subject to persuasion.”

Everything seemed against Trump. But somehow he beat 16 candidates in the primaries and one big candidate in the election.

And, Scott says, all the theories as to why he won have been wrong.

So I called him up and asked him what happened. And he told me:

Listen to the FULL interview with Scott Adams

– words that had never been used in politics before

– words that were visual. So every time you looked at the candidate being described you would look for confirmation bias.”

Example: Jeb Bush he described as “low energy”. “Low energy” had never been used to describe a candidate before so they stood out.

And whenever you looked Jeb, unless he was jumping around, you would automatically look for clues that showed he was low energy.

Trump systematically did this with everyone who was frontrunner against him, including “Crooked Hillary” which referred both to her legal troubles and the persistent rumors that she was sick.

Scott said, “Trump clearly had the Power part down. But he was low on Empathy.

“So he used polling to figure out what the critical issue was for the most amount of people and came up with Immigration. By going with this issue he proved he had empathy with his base.

“Expect him as President to try to show empathy to a much larger group of people.”

“Trump consistently oversold his point. For instance, ‘Build a Wall’.”

He used hyperbole because it’s the direction that counts.

“It didn’t matter that the facts didn’t support him. His base was listening to the direction while all the media was getting bogged down in the weeds.

“And in many cases, he would back down. He would recognize if he oversold too much and back down on it.

“But again, the media would show his views for free because he was so outlandish and his supporters would note the direction, not the facts.”

I asked Scott: What would happen to Trump if a “Rick Perry” situation occurred like in 2012, where Perry couldn’t name the 3 cabinet departments he wanted to eliminate and that destroyed his campaign?

Scott said, “If Trump was stumbling to name the three he would just say, ‘You know what? There are 10 cabinet positions I’d eliminate! You probably can guess the ones I’m talking about.”

“And then while everyone would be scratching their heads trying to figure out if there are even ten cabinet departments, his supporters would be just note the direction.”

Early on he would say things that were so audacious nobody could believe a Presidential candidate would be saying these things.

But people got used to it. It got him free media coverage which allowed him to spend less than half of what Hillary spent.

It allowed him to consistently say audacious and outlandish things throughout the campaign without upsetting his base.

If you just outright reject someone, they won’t even pay attention to what you say.

But with everyone he spoke with, he would start off agreeing with them and then start to turn people towards supporting his ideas.

Even with Hillary, he would say: “She has great experience” before following it up with, “but after 30 years, what has changed?”

Scott said, “I’m not the funniest guy in the room. And I’m not the best at drawing. But I’m pretty good at both and that’s where Dilbert comes from.

“It’s really hard to be the best in the world at one thing,” Scott told me, “But if you are ‘pretty good’ at a bunch of things and use them together, you can succeed.

“Trump has one of the best talent stacks I’ve ever seen. He’s not the smartest guy in the room, but he’s pretty good at public speaking, business smarts, humor, hiring and firing, politics, etc.”

Again, he didn’t know as much as the other candidates about every political issue.

“Expect him to get to know the facts that are important once he is President. But he was pretty good at knowing what was going on and combined that with the other “pretty good” things in his talent stack.”

Blame others for people’s suffering

These were much more powerful persuasion messages.”

Did Hillary have a chance?

How could Hillary have fought better using her own persuasion techniques?

“Hillary was running a strong persuasion game in the summer,” Scott told me. “She might even have won if she stuck with it.”

” ‘Dangerous Donald’ was scary for people. But then her campaign leaked the Billy Bush video and even though it caused Trump to dip in the polls, it wasn’t as bad as portraying him as a madman at the nuclear controls. Ironically, that bad news actually helped Trump.”

My podcast with Scott comes out later today.

I wanted to learn other things from him. Like how can I, or anyone, learn these persuasion techniques.

What are the easiest techniques to learn?

He told me on the podcast. Plus he was very honest and told me a trick he uses with the women he dates.

Does any of this mean Trump is going to be good or bad?

This article isn’t about that. It’s just about what Trump, and all political candidates, do to win elections. Trump, according to Scott, was just particularly good at it. “The best I’ve ever seen”.

Is it bad that people are irrational? That facts don’t matter?

But it’s the reality. Our brains were built to hunt for food in scary and uncertain situations.

In our more complex society, we still respond to primitive emotions even if they are now irrational.

Do I want to be better at persuading so my life is better? Of course

The reality is: I’m easily influenced and have to constantly remind myself everyone has an agenda all the time.

I don’t think it matters who is President. There are too many forces at work to check and balance everything.

But it does matter how I react, how I build my life day by day. It’s my choice (I hope) whether or not I have a good impact on others.

Or not. Maybe Scott hypnotized me into writing this. In which case, he did an excellent job

Listen to the FULL interview with Scott Adams

Fascism Has Come To The United States