Lynn, our child’s babysitter, was a drug addict and her doctor told her that her brain scan was the same as that of an 80 year old man’s who had multiple strokes. Lynn was afraid to tell us she needed to take a few days off from watching Josie so she could go on Oprah to talk about her brain scan, drugs, sex, and whatever else. She was worried we would fire her and she had neglected to tell us some things when she was hired to babysit our one year old.

Lynn was great with Josie and we considered her part of the family. Mollie was coming along soon and Lynn would be babysitter for both kids.

She decided to tell us: she had been addicted to the drug, Ecstasy. She had been hospitalized. Her before and after brain scans were going to be on Oprah and it would be a mess to watch. And, finally, she would be sitting on the couch with Oprah and they would chat about it and reveal all. Lynn felt we should know all of this stuff before any of our neighbors told us.

She was coming out of the subway the day she decided to tell us when the subway got bombed by terrorists. Not only the subway but the two buildings, the World Trade Center, that were on top of the subway.

So everything got delayed.

A week or so later she told us and then a week or so after that she was on Oprah. Here’s her brain scan: 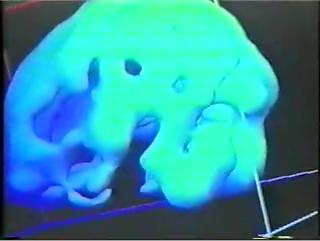 Lynn chose herself to succeed. Nobody was going to give it to her. Her father was missing in action. She became an addict. She was a college drop-out. And things went from bad to worse when she had a mental collapse and found herself hospitalized.

When she got out of the hospital she became Josie’s babysistter. She also decided she was going to use her experiences to help people.

She wrote to MTV and went on one of their shows to describe what happened to her. Oprah saw the show and then wanted Lynn on the Oprah Show. After Oprah, Lynn put together a book proposal about her addiciton.

It wasn’t the regular twelve step thing. “You have to love your addiction,” she told me. “You have to learn to accept it and learn to accept what it is inside of you that caused you the pain that leapt into that addiction. Only then can you deal with it. Everything is about acceptance.” The other day she told me, “We often hide the good, the pretty, the successful inside ourselves from the bad, the failure, the ugly. They have to unify else we get fragmented inside ourselves and we can’t accept who we are.”

She got a book deal. A great one. She was still Josie and Mollie’s babysitter for another 18 months. But then unfortunately she quit. She moved to California and finished the book. Probably a better choice for her then watching two little kids. I highly recommend the book.

She didn’t stop with the book. A vision expands and expands until it fills up your entire universe. You can’t stop it. There are no frontiers to passion.

She started writing to schools and prisons and anywhere else she could think of to speak about addiction. She began traveling around the country giving talks. She was making a living.

During this time I often got two questions from people who knew the story:

“Didn’t you mind that a drug addict was your daughter’s babysitter?” Of course not. In fact, we paid her more when she asked for it. Everyone goes through adversity in their lives. Many people bury their unhappiness inside of their routned and judgmental lives. Being honest about the pain inside and not trying to run from it or even suppress it is the key to much success. I can say that since I’ve started this blog, for instance, unbelievable opportunities have dropped down on me.

The other question, the more annoying one, came from close relatives who asked: “If a drug addict can get a book deal, don’t you think I should be able to get a book deal?” And my answer: of course not. You have nothing to write about. Then they say, “So you’re saying I should be a drug addict.” I don’t know what I’m saying. I never really know what I’m saying so forgive me.

Lynn moved to California, her book came out, and she became a successful speaker making thousands per talk and speaking all over the country.

I had an investor, Dave, who was single. He lived in California also. He liked two things: surfing and investing. I introduced him to Lynn. On their first date they both called me afterwards and said they had a great time. On their second date, Dave was wearing a heavy backpack when he showed up at her house. Lynn said, “why are you wearing a backpack?” And Dave said, “because I’m moving in.” And he moved in for many years and whenever they could afford it they traveled all over the world.

For awhile they even stayed in an abandoned home that I unfortunately owned until it was recently sold.

Then they broke up. “Traveling is your first love,” Lynn told Dave. “And I can’t be in second place.” She wrote down all the things she wanted in life. Among them, one of the things she wrote was that she wanted a house with a treehouse.

A year after that Lynn was married, pregnant, owned a beautiful house in LA. In the back, the house had a treehouse. Claudia and I visited a few days ago.I’m afraid of heights but I even went up there to look around at the LA horizon.

But she still didn’t stop. Again, passion has no frontiers. It fills up every emptiness and delivers value to everyone around you.

“Try these,” Lynn said, and gave us some cupcakes made by the business she and her sister were starting. The cupcakes are gluten free and the brand is called “Whisk”. The cupcakes were unbelievable and I normally hate gluten-free. I think I ate the whole box. Lynn’s new husband, Brady, is a talent manager and is able to help her get the cupcakes in the hands of celebrities. They all love the cupcakes. Here’s an example:

Lynn had dropped out of college when she was younger. “I wasn’t learning anything,” she said. Her dad was never a help to her. She became a drug addict. She had been hospitalized and close to death because of it.

Since then she’s spoken to and helped tens of thousands of kids about drug addiction, written a book, been on Oprah, gotten thousands of letters from kids who were grateful for her, married the man of her dreams and moved into the house of her dreams and now is creating a very successful gluten-free baking company. She has more energy than anyone I know. Coming out of an addiction (a negative passion) can unleash all the positive passions. I hope Josie and Mollie turn out just like her.

Your Addiction Changed You, But I Still Love You