I regret losing all of my money and then losing my house. I regret not spending more time with my kids when they were little and I regret not saving the life of my dad when I could’ve.

In 2000 I was buying every IPO I could. It was already after the dot-com bust. I bought 50,000 shares of GoAmerica at $20. It went down to $1. I don’t know where it is now. I think now they give wireless devices to deaf people. I made lots of decisions like that. I went completely broke doing that. ZERO. So I took all the equity out of my apartment, about $1 million. Then I did the same thing. I lost all of that money also. Someone asked me how much money. The summer of 2000 I lost $15 million in cash. All of my money. I regret it.

I regret going broke. I could’ve helped people. I could’ve started other businesses. I could’ve helped my dad when he had a stroke. There was a new device I had read about that would have rotated him around in the air to stimulate his brain cells. It would’ve cost maybe $100,000 or more to fly him across the country and have him try the device. But I couldn’t afford it. I had no money and I had the IRS up my ass. After everything he had done for me. I couldn’t afford to save his life.

I regret all the stress I felt for years as I tried climbing back. It wore on me. Now my stomach is constantly in pain no matter how much I meditate, pray, relieve stress, do yoga. It will take years to untie the knots in my stomach, if they ever get untied. 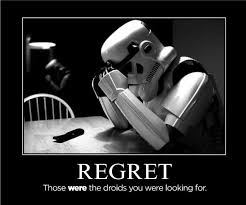 There were women. I regret what I did to them. I regret the tears one of them had when she told me I had to go. She hated me. I regret the baby that was killed.

I regret the two businesses I started when going through a separation in 2008. I wasn’t ready yet to begin a life. I regret getting people involved in those businesses when they were destined to amount to nothing.

I regret hitting a man and breaking both his legs when I ran through a stop sign while driving a car when I was 18.

Everyone has regrets. Historical is hysterical. It’s easy to look back at the past now and see the road signs we missed. The forks in the road we could’ve taken. Those forks are regrets. Is it bad to look back? Of course not. I can’t help it. I have regrets every day.

But you can’t move forward until you move past the regrets. It’s impossible.

20 Ways to Deal With Regret

B) The Daily Practice.

Ultimately, it has consistently been the only way I’ve been able to bounce back from events that caused me deep regret. Otherwise I sink into them. They bury me. In a book I have coming out in a few weeks I write about modifications to the Practice that has made it easier for me when I’ve been totally on the floor and unable to pick myself up.

C) Some parts of the Daily Practice need kickstarting to work. I start with The Power of Negative Thinking. Or Nine Ways to Light Your Creativity ON Fire. The first post deals with how to build a discipline of labeling thoughts “useful” or “not useful”. You have a finite number of thoughts in life before you die. Might as well make as many of them as possible “useful”. This is hard. For me, it’s like telling myself to exercise every day when I spent the first 40 years of my life not exercising. Something I regret. “Not useful”.

E) Don’t judge people. The other day I wrote about a dinner I went to. I was surprised how many people wrote me disparaging the IQ of one of the people at the dinner even though they didn’t know that person. In order to judge someone you don’t know you have to have a lot insecurity and ego. It’s hard to get rid of that insecurity. One way to do it is to never judge people. Particularly people you don’t know. That’s a good way to practice not judging yourself.

F) Honesty. Honesty can lead to wealth. Being honest also helps you avoid denial about your regrets. Stop blaming others. It’s important to realize that both Most things don’t work out AND most of the time, It’s Your Fault. I was often in denial about both of those things. They are both truths.

G) Laugh. Watch a funny movie. When I was going through a period of deep regret I watched the movie “Superbad” probably about 20 times in a row and I wish I could say I am exaggerating. That movie saved my life. Laughter reduces stress, brings you to Today. Leaves behind yesterday.

H) Deal with Failure. When I was a kid everyone told me I was a genius. Expectations were really high for me. It was extra hard for me to realize later on that I was far from it. Everyone had told my dad he was a genius also. When it came time for his regrets he couldn’t get over it. It sunk him like a bag of cement in the ocean and he never swam again. I’m always afraid to be like him. It’s ok to fail. Hey, what are you doing today?

I) Good will. Practice this: everyone you see on the street today – wish them well. Wish that they all make a lot of money and have a lot of health and that they are all having passionate sex with someone tonight. I never watched that movie “the Secret” but I imagine this is the real Secret: wish enough people good will and eventually good will happen to you.

J) Stop being brainwashed. A lot of my posts (don’t go to college, don’t own a home, abolish the Presidency) are there because I like to think in opposites. Some people write me and say, “are you just trying to be sensational?” No! I’m trying not to be brainwashed all the time. I know that with 10,000 ad and media impressions hitting my eyes every day that I am constantly being brainwashed by the Zombie Recruitment Machine. Training your mind to think in opposites helps you avoid being brainwashed. This includes reducing the number of ad impressions and media impressions you see each day. Replace that time with time with friends. Or time sitting by yourself. The more brainwashing, the more regrets.

L) Should have, could have, would have. These are never useful phrases. Even when analyzing a situation that led to a regret (and it’s important to analyze your losses). Instead of saying, “I could have done X” ( a regret) say, “Next time I’m in a similar situation, I’ll do X”. If you know you’re never going to be in a similar situation then no reason to do the analysis. Historical is hysterical. What are you doing Today!?

M) Don’t deal with Crappy People. I don’t care if you have to see them every day. At the dance. I see every girl but I don’t have to dance with every girl. Don’t dance with the crappy people. Always check yourself on each interaction – did I just dance with them? You don’t need them to like you. Who cares if crappy people like you?

N) Don’t drink. I know a girl who is filled with regrets. “Was I bad to my ex-husband?” “Did I eat too much?” “Did I miss this opportunity?” I asked her, “What did you do last night?” She tells me she hung out with people she’s constantly trashed to me in the past, she ate at the fanciest steakhouse in town, and she drank and had a hangover in the morning. I said, “can you stop doing that?” And she was honest and said, “I don’t think so.” That was one of the last times I spoke to her. I used to drink all night with her. I know what it’s like. She won’t be able to stop the regrets. People don’t usually give this as advice because it’s so built up into our culture to have a drink occasionally. Fine, have a drink occasionally. But the drug is a depressant so just limit the number of depressants you put in your body.

P) Mourn. We often regret actions we’ve done that caused us to lose things that were important to us. In most traditions, there’s a mourning period when people die and then you are told to move on. So mourn for those things that were important to you. Mourn the money you lost or the people who left you. Pray that everything works out for the best. Give yourself a time period for mourning. Then move on.

R) Sorry. Say “I’m sorry” when you can. It doesn’t matter if your apology is accepted. That’s the other person’s issue. But if you say you’re sorry, you’ve at least acknowledged that you’ve made a mistake and you’re ready to move on. If you regret something you did to yourself, say you’re sorry to yourself. Accept the apology. Try to be friends again with yourself.

S) Eat What You Kill. Reduce reliance on others. Even a boss or a job. Learning how to eat what you kill will reduce the things you will later regret. It will also force you to focus on what’s going on today instead of the past. Else you don’t eat.

T) Be passionate about your work. If you aren’t, then quit. Don’t blame the recession or the job market. Those are media myths. They aren’t about you.

I wrote this because many people in the last three or four weeks have asked me how to get off the floor after doing things they deeply regret. It’s not easy. It doesn’t happen in a day. It has to happen EVERY day.

Today I’m going to make sure I can practice The Daily Practice I recommend. I’m also going to attempt to be creative. I’ll play games with my daughters. I’ll watch a funny TV show. I’ll return emails to people who were kind to me. I’ll attempt use my own advice to not be angry at the people who try to bring me down. I’ll fight the fears that constantly come up.

19 Ways To Deal With Regrets

40 Random Strangers On Their Biggest Regret