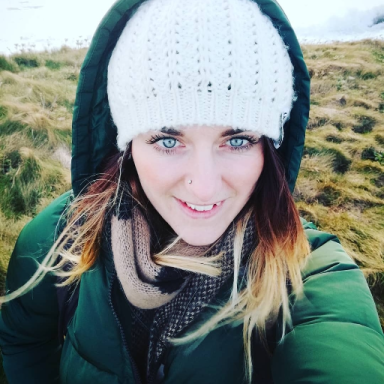 But I didn’t quite know whose voice this was, only that it was so loud and so hungry and so angry that it had me running wild—running from one relationship to the next, always wanting more. I wanted to be seen, to be heard, to be loved.

She would scream at the top of her voice, her shriek so powerful that it would send my heart into a frenzy.

For years, I had been searching and grasping and loving and choking. Each time I found someone new, I would settle for a while and perhaps feel briefly content. The voice would quiet down and for a second, and I’d think that was it. I had finally tamed the beast inside.

Other times I felt I was suffocating in my skin, so I would simply leave. It was as if I had two people living in my one body. One part of me wanted to be loved sickly sweet, caressed and loved unconditionally, and the other part wanted space, freedom, and growth.

When it got to the point where my space felt crowded or my growth felt stunted, I would leave. It was at this point that she would rear her ugly head and start her screaming all over again. I was trapped in an endless cycle of seeking love, being in love, then rapidly choking on love.

The funny thing is if I felt too loved, I didn’t want it. I would toss it away, careless and confused.

On the other hand, if I felt alone, unloved, unseen, or unheard, she would start her screaming all over again. This screaming would scare me SO much that all I could do was run back into the arms of a previous partner, someone who had once shown me love. Back to someone who had once seen me, heard me, felt me, and held me in their arms. Even if I knew it wasn’t right.

Interestingly, it was only recently that I first became aware of her screaming while being in a relationship. Usually, I only heard and felt her strongly while living a single life. I had raised an uncomfortable topic with a partner and wanted to express my emotions around this — he had been unwilling to listen and discuss the topic I had raised and ultimately I felt unheard. This is when I felt her surge through my soul; a wrath of fury, flames of rage, and a whirlwind of fire. My body felt like it was going to explode.

On reflection, I noted that I had also experienced this feeling with previous partners, only I had decided not to listen. Instead, I would push the fury down, smile sweetly, and pretend that nothing had happened. Secretly, I was seething and choking on anger and resentment.

Single or not, her screaming would set me off.

The only thing that would stop her screeching would be love – in any form, even if it was just physical. I found myself seeking connection and intimacy through lust and longing. I found myself embodying a victim mentality where I would look to the other person to heal me, to help me and comfort my screaming soul. Ultimately, I would step out of my own power and into self-abandonment, channelling all of my energy into the illusion of a healthy relationship.

After a few weeks of relying on the other person to bring me back to balance, my higher self would kick in. This was not a sustainable form of balance, this was a dangerous game of living with my external environment controlling my internal world. And once again, my gut would wrench, my heart would pound and the bigger part of me would make it clear it was time to leave.

Through this journey of slapstick, back stick loving, I have learned a lot. I have learned that not only am I capable of loving but I am capable of hurting – not only myself but others around me. And it kills me every time I see that look in their eyes.

When I bounce back, say I’m ready to love, and then leave again.

I’m not sure when the screaming started; it’s too hard to say. But I know her voice has haunted me through my waking days and dreaming nights. She has remained elusive, anonymous, and misunderstood throughout my entire adult life, until one day, she was brought to light.

Last month I attended my first kinesiology session. I thought it would be like many other holistic therapies that I have tried: relaxing, soothing, and healing. Well, it wasn’t relaxing, and it definitely wasn’t soothing, but my god was it healing. After some brief muscle testing, my therapist started to lightly touch, move, and balance stuck energy in my body.

As he worked on dissipating energetic blockages, he also seemed to read my mind. He said ‘tell me more about this feeling of not being seen and heard.’

I had literally just come out of yet another short, intense and highly charged relationship which had left me feeling disappointed. Out of the blue, he had ended the relationship. Strangely, after a few days of tears, I didn’t feel too bad. I remember saying to my mum, “Well, I wasn’t feeling seen and heard anyway.” In fact, I was feeling quite relieved.

My mind was blown.

My therapist then continued to move stuck energy in my body and effortlessly assigned words to match the thoughts in my brain. It was like an energetic form of therapy: moving, talking, releasing and realizing. Realizing deep truths about myself, my behavior, and my being.

It was a week later, while sitting in contemplation on an empty, rainy beach, that I felt her for the first time. A tiny five-year-old girl kicking and screaming in my soul. She was so lonely, so angry, and screaming so loudly that I had to listen. I had to listen to what she had to say.

At first, she said nothing, just ran in wild circles — kicking and screaming, crying and heaving her tiny body all over the place. I sat and watched her in my mind’s eye.

She had SO much POWER.

This was the voice that had been running my life.

I let herself scream and scream and scream, releasing all that she had to say until her tears and throat no longer choked and she stopped to catch her breath. I then invited her into my heart with my arms wide open in a big pool of love.

At first, she seemed displeased — untrusting, unwilling, and uncertain. I waited patiently and continued to send the offer of love. Slowly but surely, she approached my beating heart. She climbed on top of its chambers and lay across my love.

Fast forward a few weeks and here I am today, checking in and continuing to build a relationship with this cheeky little devil every single day. I say good morning to her, invite her to climb into my heart, and shower her in a ray of love. I cradle her, I cuddle her, I ask her what she wants to do today. Sometimes her answers are downright childish. Sometimes she is pretty fucking smart. Sometimes she just wants ice cream and bubble tea and movies after dark.

This is me, aged five years old – the part of me who tells me that she feels unseen and unheard. And so every day, I vow to see her, I vow to hear her, I vow to feel her and send her love. In these short few weeks, I have noticed miraculous changes in my thoughts, actions, and behaviors. I no longer feel the need to run into love headfirst, crash bang, or run back to someone from the past.

It is as though a veil has been lifted and I can finally see: the endless patterns and relentless screaming were simply a tiny part of me.

Just waiting to be seen.

3 Ways To Comfort A Mom In Distress

I Thought I’d Finally Escaped My Atrocious, Overbearing Mother — But She Found Me