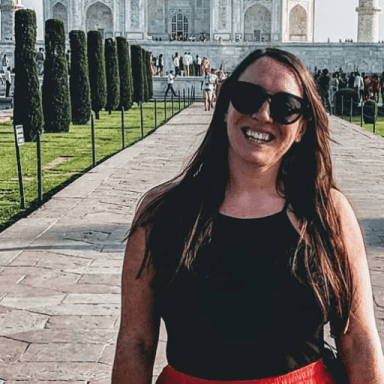 As a life-long sufferer of anxiety, I’ve always been adept at imaging the worst-case scenario. Depending on how severe a particular bout of anxiety is, symptoms range from low-level fears (she hasn’t replied to my WhatsApp because I’ve gravely offended her and she now despises me) to health-focused worries that convince me I have a life-threatening illness. During a recent peak of panic disorder and generalized anxiety—triggered by the relentless pace of a year traveling Asia—I locked myself in a hotel room in Goa, breathless, sobbing and alone, convinced I had contracted rabies from stroking a street dog that day. Further confirmation of my case was the drool on my pillow when I awoke (frothing at the mouth) and an inability to recall every town I’d visited during my year on the continent, which amounted to hundreds (disorientation and memory loss). I even interpreted my body’s response to the 40-degree heat as a heightened temperature.

Six months later, once I’d returned home to England and started to slowly heal, a reminder popped up on my phone, which initially confused me. ‘Rabies incubation period over,’ it said. I was free! Though diminished, the thought of rabies had still been nibbling away at the corners of my brain. But the worst was far from over. What followed was a few months of other tormenting fears, which included but weren’t limited to: HIV, impending heart attacks, getting fired, getting murdered, causing the death of a child by pressing a button at a pedestrian crossing, getting attacked verbally by my friends, former one-night-stands releasing footage of us having sex.

These anxieties didn’t hurtle past my consciousness like a tube train—they weren’t just temporarily jarring. Instead, even a nascent thought would sink in its hook and eat me away from the inside, like the tiny spore that rots an entire peach.

That’s why it came as a huge surprise that, after losing my job as a travel copywriter and facing the heightened prospect of catching a deadly disease, my anxiety seemed to briefly surge and then retreat. Within days of air travel reductions, my full-time freelance copywriter position was axed and I found myself with my brother and Dad, back home in Derbyshire, where a creeping pace usually triggers a dull melancholy.

I was scared about getting coronavirus. I was scared about giving my family coronavirus and being responsible for their deaths. I checked the worldometer daily, making a clumsy attempt to analyze the data, trying to deny that numbers were climbing and climbing uncontrollably. News reports made my stomach plummet. Videos from patients, consumed with rattling coughs, permeated me with dread. I foresaw perennial unemployment. I thought I’d be lying in bed and crying. I was convinced that after spending 3 weeks locked away with me, that the atmosphere between me and my family would be fractious, taut. I feared the emotional turmoil of the days leading to my period when hormones churn and smash against the sides of me, spilling over like venomous froth from a turbulent sea.

And then, suddenly, it stopped. I stopped. A gentle rhythm, of both body and mind, began to form. The sheets of my bed felt soft. I no longer felt worried about upsetting Sam and Dad, with whom I’ve always enjoyed a close and relatively stable relationship. The restless urge that usually propels me to race through life in London—ticking off restaurants, exploding through the door of social occasions, getting drunk to excess and spending days tormented by what I could have said, three dates a week—became gentler, and I began to understand how people could live simply, without holidays or nightly events. My incredulity and distaste for such a life began to wane.

I eat slower. I look at the colors of my food; a morning-sunlight yolk on a creamy green avocado. Peony-pink salmon flaking away beneath a butter knife.

I listen to the birds. Each morning, before I trudge through LinkedIn job alerts, I stand outside and gulp morning air that’s thick with birdsong and tinged with mist.

I descend into hysterical laughter more. Instead of just laughing on cue, a reflex, this laughter paralyzes me—tears weep from my eyes and it surges upwards and out of me in pure, animal gasps that border on sobs but come from an entirely different source.

Lastly, my brain feels more receptive and loose, as if having fewer stimuli have allowed it to relax, lie back, and belch out ideas that were previously buried beneath the endless engagements of daily life.

As expected, there are times when I feel bored and frustrated and absolutely mad. Crying at the death of an elderly SIM was a particular low. However, rather than being consistent, these episodes are intermittent and relatively easy to remedy.

I feel very grateful to have experienced these gentle changes. I’m lucky that my mental health has been allowed to convalesce during this pandemic, unlike NHS staff, key workers, and Coronavirus patients and their families, the majority of whom are probably feeling frazzled and exhausted and overwhelmed by emotion. I’m also so grateful to be around my family in a house that’s got a garden, as I know many people don’t have that luxury.

Once I’m back in London, back in my small flat among noise and smoke and thousands of other bodies, I’m sure that I’ll look back on these times as some of my happiest. Before, there was nothing scarier than being alone with my thoughts. Though I’ve come along way with managing my mental health, I realized that I maintained such a frantic pace of life in order to avoid something. I was always running away from the black dogs snapping at my heels. But now, having been forced to let them wash over me, I’m feeling far less scared. I wonder whether years of creating fears and catastrophizing has meant that I’ve been better equipped to deal with the horror of coronavirus—after all, my mind is skilled at generating worst-case scenarios that are so convincing that they blur into reality.

I collect fridge magnets and have a penchant for pastry.

Try Not To Eat Them All At Once

How The Pandemic Sparked My Transient Stress-Related Paranoid Ideation