Born and raised in Colombia, Luis Garavito was a sadistic killer who specialized in the murder of young, poor kids. He would casually approach these poor children and offer them gifts or small sums of money. He would walk with them to deserted area and then subject them to prolonged torture. He would molest them, and dismember various parts of their body before finally killing them — often by slitting their throats.

He was captured and sentenced in 1999, however may be released from prison relatively soon because of good behavior.

Pedro López was known as the “Monster of the Andes” who killed more than 150 people before finally being brought to justice. He had a traumatic childhood, with an abusive mother who worked as a sex worker. His mother was frequently assaulted by patrons, and López was an early observer to violent behavior. He got kicked out of the house by his mother after he was caught fondling his younger sister.

After serving a term in prison for stealing a car, he began his murderous career. He preyed on young girls, often from poor families. He would lure them into rural areas to then rape and murder them.

A rural village eventually caught him trying to kidnap a nine-year-old girl and subjected him to their local tribal law. He was going to be buried alive before a local missionary convinced the village to hand him over to the authorities. He was deported from Peru, but not changed, and resumed his sociopathic murders in Colombia.

He was eventually caught in Ecuador and sentenced to only 16 years in jail. He was released from an insane asylum in 1998 and his current whereabouts are unknown.

Daniel Camargo was a South America-based serial killer who preyed on poor, young girls in various countries. In his routine, he would pretend to be a foreigner and approach a young girl, saying that he needed to locate a particular pastor who lived on the edge of town. He would tell the girl that if she could show him the way down the road, he would reward her financially. While on the path, he would suggest that they take a shortcut through the woods where he would rape and murder them. He would leave their bodies in the forest to be eaten by scavengers. Occasionally he would collect the clitoris of his victim.

He was arrested by two local police officers who thought he was “acting suspiciously” and found bloody clothing in his bag. He later confessed to everything, saying he liked preying on young girls because “they cried” and he saw it as vengeance on women who were unfaithful.

Not long before his scheduled release, he was murdered in prison.

Pedro Filho was a Brazilian serial killer who murdered dozens, including his own father. His murderous life began at the age of 14, when he murdered the Vice Mayor of his town for firing his father. He sought refuge in another village where he married a woman and settled down briefly. When his wife was killed by gangsters, however, he resolved to get revenge. There was no price too high to pay for this revenge, as he murdered upwards of half-a-dozen people trying to discover who killed his wife.

Later, he journeyed back to his hometown where his father was serving a jail term for cutting up his wife — and Filho’s mother — with a machete. Filho sought revenge by executing his father behind bars, and then chewing up pieces of his heart.

He was arrested not long after, but only continued murdering people behind bars. It is estimated that almost 50 of his victims were fellow inmates while he was incarcerated. He was released from jail in 2007.

Filho is unique in that he typically only murdered other criminals. He notably looked down on other serial killers of the day who preyed on young children, or “innocent people.”

Very little is known about Kampatimar Shankariya. He was an India-based killer who murdered at least 70 people, if not more. In a very gruesome confession, Shankariya said that he became a serial killer because of the “pleasure it provided.” Before his execution, however, he mused that his murder was “in vain” for some reason.

Known as the “Monster Killer,” Xinhai was an sadistic murderer based in China. He would enter victim’s houses at night and kill all occupants with knives, axes, meat cleavers, shovels, and hammers. He would rape the female victims. He was arrested in 2003, and sentenced to death.

Xinhai said that his murders were in response to being dumped by his girlfriend. 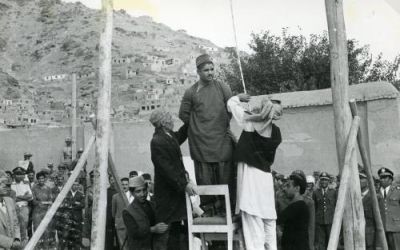 Abul Djabar was an Afghan serial killer who murdered his victims by strangling them with a turban while raping them. He preyed mostly on young boys, and he was arrested while in the middle of a murder. He was sentenced to death by hanging (see picture above).

Born in Russia, Andrei Chikatilo was a Soviet serial killer who murder over 50 victims. After returning from a stint in the Red Army, he began a romance with a young woman. Their sex life, however, was dismal as Chikatilo was unable to maintain an erection. His lover, asking for advice, spread knowledge of his impotence around the village and Chikatilo attempted to hang himself.

After being pulled from the nose by his family, he ran away from his home village and eventually married in another town. His wife accepted that he was unable to get erect with her, and he would ejaculate “manually” and push the semen up into her vagina. The two eventually had two children.

Rumors that Chikatilo was sexually harassing and molesting students became prolific at the school he began teaching at. He was dismissed from his post, and this is when he turned to murder. The police were constantly on his tail, but he managed to evade conviction until 1988 when he was found with a human bite mark on one of his fingers. He eventually confessed to at least 34 murders. His typical target was lower-class individuals who he would lure away from their home — though he occasionally broke into houses to murder as well. He liked to bind victims and inflict multiple stab wounds before completing the killing — usually totaling between 30 and 50 stabs total.

In his confession he told police that the victims’ “cries, blood and agony gave him relaxation and a certain pleasure.” He admitted that he would occasionally “chew on the excised uterus of his female victims and testicles of his male victims.”

Anatoly Yuriyovych Onoprienko was a Ukrainian serial killer who was known as “The Beast of Ukraine” and “Citizen O.” His murders had a very set pattern. He would find a house that was far away from civilization, and become friendly with the occupants — inventing some reason for talking to them and meeting their acquaintance. He would then kill everyone in the house, starting with the oldest male.

He was captured in 1996, and somehow escaped the death penalty, but died in prison in 2013.

Gary Ridgway was an American serial killer nicknamed the “Green River Killer” before his capture. He had a troubled childhood, performing poorly in school and not acquiring many friends. His domineering mother would make him march naked to the bathroom after wetting his bed at a somewhat late age, which he found sexually alluring.

He had two marriages that both ended because of his infidelity, which was driven by an insatiable sexual drive. Somewhat counterintuitively he escalated his solicitation of prostitutes even as he experienced a religious “rebirth” that resulted in him evangelizing door-to-door in his town.

Starting in the 1980s, however, he began soliciting prostitutes not for sex, but for murder. Looking down on sex workers, he would pick them up and kill them while in the enthralls of sexual intercourse — or immediately after.

Ridgway considered murder “his career” and had a very set routine. He would pick up a sex worker, make her comfortable by showing them a picture of his son, or shooting the breeze. He would then strangle them, either by hand or using a ligatures. Ridgway was picked up for murder in 1987 after a DNA test linked him to one of the victims.