Donald Trump has telephoned the FBI today after he was “threatened” by the son of escaped drug lord Joaquin “El Chapo” Guzman from a Mexican prison. This was the tweet that Trump is citing as the threat against him:

This tweet comes after Trump threatened El Chapo hours before, saying that he could “kick his ass” (or negotiate with him? It’s unclear which).

Trump then uses the prison break as vindication (??) for his bizarre views.

And asks for a full apology from the media.

It’s hard to even know where to start with this story, but I think the first thought I have is that a drug lord escaping from prison ≠ Donald Trump being “right” about immigration. Trump’s immigration policy basically amounts to believing that emigrating Mexicans are rapists and criminals. You know who are rapists and murderers? Rapists and criminals. And, yes, the law of big numbers suggest that some of them cross the Mexican border in the United States, but there is no statistical evidence anywhere in the world that suggests most illegal immigrants are violent criminals.

But regardless, his immigration argument has absolutely nothing to do with El Chapo escaping from prison. We have two things here that are not related:

Venn Diagram Displaying The Overlap Between These Two Points 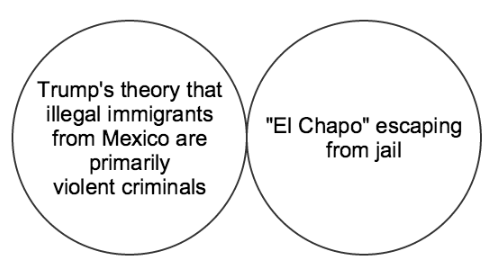 The fact that El Chapo escaped from jail has nothing to do with the border or immigration issues. Trump is asserting that since somebody in Mexico escaped from jail, it proves his stance that most illegal immigrants are violent criminals. It’s not even apples and oranges, it’s apples and rocks.

This is all yet another demonstration of Trump’s magical power to make absolutely anything about him. El Chapo escapes from prison? Oh, that totally vindicates my immigration “stance”. Oh, also I bet he is after me! Better tell the FBI, better tell the media!

And if Trump is honestly fearful for his safety he should call law enforcement. That is totally why they are there. But we all know it isn’t about that. It is about trying to headline yet another news cycle with either (1) his bizarre (i.e. false) claims of vindication or (2) typecasting himself as some brave warrior standing up to the drug lords who are “after him”.

There is also something to said for not tweeting to some drug lord telling them that you will “kick their ass” if you don’t want them to tweet back to you.

Is Trump More Interested in Being A Provocateur Than An Actual President?

Melania Trump Just Liked A Tweet Roasting Her Relationship With Donald, So Maybe She Hates Him Too