Last week Samuel Dubose was pulled over by University of Cincinnati Police Officer Ray Tensing for a routine traffic stop. A few minutes later his face was “blown off” by a shot from Tensing’s gun.

The exact details of the altercation are up for debate — Tensing claimed the man goaded him with a bottle of alcohol and “dragged him along” with the car — but multiple Cincinnati officials have agreed that the death was “unnecessary.”

“It’s not a good situation,” City Manager Harry Black said. “It’s a tragic situation, someone has died that did not necessarily need to die.”

“The video is not good,” Blackwell told local news WCPO. “I think the city manager has said that also publicly. I’ll leave it there.”

City prosectors have announced that they will release the body-cam video footage of the altercation between Tensing and Dubose today after the Grand Jury convenes. Apparently the footage is so graphic and violent, Cincinnati is actively preparing for large-scale rioting.

The University of Cincinnati has cancelled all classes for the day, and set up barricades around campus.

UC Police officers are blocking off streets into campus. pic.twitter.com/zirzTotrob

Police are allegedly going door-to-door in student-populated areas to urge them to evacuate the city.

But there are long lines of cars trying to flee the immediate University area:

The organization “Black Lives Matter” has also just announced a protest outside the Hamilton County Courthouse for this evening at 6:30pm. The event page has only been up for thirty minutes, but over 50 people are already attending and over 250 have been invited.

They have also posted a list of public demands on the page: 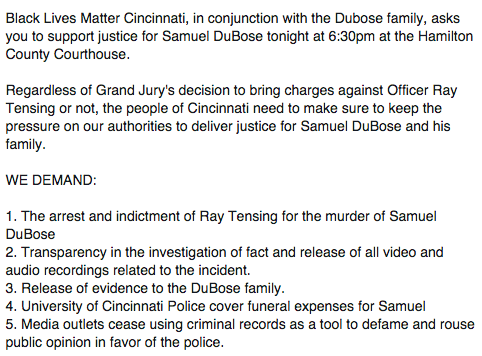 Information has come to light that the Grand Jury has indeed indicted Ray Tensing for murder. The protest is schedule to go on “no matter” the indictment, however.

‘This is without question a murder': Campus cop Ray Tensing indicted in fatal shooting of Sam Dubose https://t.co/1VueVEn9jy #SamDubose

University of Cincinnati cop charged w/murder in DuBose shooting http://t.co/S546Q3iWZN Deters: "He should never have been a police officer"

JUST IN: University of Cincinnati police officer indicted on murder charge in the death of #SamDubose via @ABC

More news will be added to this story as it comes.