Joyce Carol Oats is a celebrated author who has been churning out award-winning novels since the early 1960s. Also, she might have looked at a picture on Twitter a little too quickly. 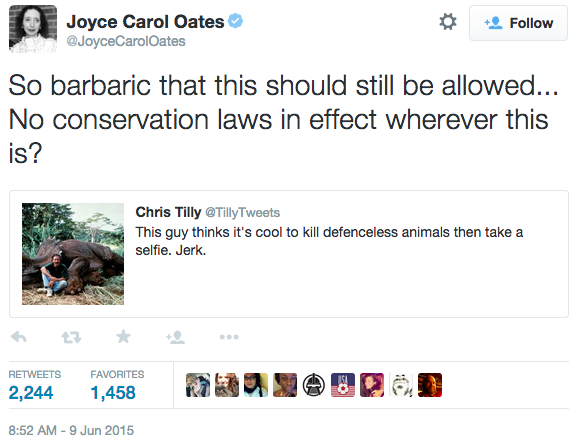 In recent years there has been an increasingly common trend of privileged people going off and illegally killing endangered animals and posting pictures up on social media to gloat. There is absolutely a reason to be offended at those photos, but this photo is absolutely not one of them. Unless you count a fake dinosaur among the endangered species list.

@JoyceCarolOates Costa Rica. And that's easy to say when you're not the one whose national parks are being ravaged by dinosaurs.

. @JoyceCarolOates What conservation law would have prevented Spielberg from killing that fake dinosaur?

The picture was of Steven Spielberg on the set of Jurassic Park, and he has assured the public numerous times that no real dinosaurs were harmed in the making of his movies. Anyway, I think it would be hard to get our conservative Congress to extend conservation provisions far enough to cover species that no longer exist.