I never knew how haunted Savannah was until I lived there myself. I moved there from Ohio in the fall of 2014.

It was my first year at the Savannah College of Art and Design and I was starting as a junior. My parents helped me move into my new, small one bedroom apartment on East Perry Lane just behind the school. They also agreed to let me take Leia, the small Corgi-Sheltie mix that I rescued during my senior year of high school. She was mostly white with a little bit of chestnut color and two brown patches right by her ears. The Star Wars fan in me couldn’t help it. While the most damage Leia could do was lick someone to death, we all figured that she could at least bark off any solicitors and serve as a companion during my transition. I was a little scared to start college where I didn’t know anyone. I was also creeped out that the view from my window showed the most well-known cemetery in Savannah: Colonial Park.

Colonial Park Cemetery is considered one of Savannah’s most haunted spots. In fact, Savannah is widely renowned as THE most haunted city in America. Put the two of them together and you have the creepiest location in the creepiest city right outside my doorstep. Over 10,000 people were buried in Colonial park, but most of the gravestones no longer exist. There’s also a plaque marking the mass grave for victims of the Yellow Fever epidemic. The biggest kicker is that the borders of Colonial Park used to extend much further than where the gates say the cemetery ends. The legend that most of Savannah, GA is built upon its dead couldn’t be more true, and I was living in an example of it. My little one bedroom apartment was probably built on top of at least one forgotten soul.

I tried not to think about the grave history of my neighbors across the street, and instead I resorted to popcorn with Leia while watching happy princess movies that kept my mind off the dead. As it turned out, most of the time, it didn’t bother me too much. After a few weeks of classes, I almost forgot altogether that the cemetery was there. It became another part of the scenery when I went to Six Pence Pub. I made a few friends in my classes and got more comfortable with the city. I even started talking to a boy named Adam. He gave ghost tours around the city, so when I told him I lived across the street from Colonial Park, it didn’t really faze him. He knew where it was from passing it so many times. It was around this time I realized people in Savannah are pretty used to scary stories.

While things were going well with my new crush, school was wrapping up its eighth week. Midterms were at the end of Thursday and Friday. I was planning on studying through the week and rewarding myself with a date on Saturday at The Public. I was looking forward to a good burger and chips that didn’t hurt my wallet.

That Wednesday night, I was doing the last of my cramming while the TV was buzzing in the background. I was working on finishing a study guide when my hand gave way for Leia to jump into my lap. I moved her off my lap, cussing, after seeing the scribble that she caused my pen to make across my paper. Leia wagged her tail and barked with her trademark smile. Annoyed, I went back to flipping the pages of my book to come up with the answers that would soon give me freedom for the weekend. Leia trotted over to the door wagging her tail. Just when I thought I might finish, she needed to go out.

Scowling at Leia, I grabbed her leash and a recyclable bag I’d been saving from the grocery store. I was hoping to make this as quick and painless as possible. I didn’t have much of a yard between my apartment and the sidewalk, so I usually let Leia do her business in the small field that separated the cemetery from the sidewalk on the other side of the street. It was conveniently located next to a playground with garbage cans that I could throw dirty bags in. I never understood whose idea it was to put a playground with a small field area right next to where a bunch of dead people were buried. I slipped on my sneakers halfway and followed her out into the street. It was 9 PM, and I wanted to spend as little time out in the dark as possible. The street lamp at least kept the playground area decently lit.

I watched Leia finish her business in the grass. She looked at me expectantly. Sighing, I scooped it up, and delivered it to its rightful home in the garbage. When I got back to the sidewalk, I noticed a small figure on the other side of the cemetery gates. It was a little boy. He had dark pants on and what looked like a brown hoodie, with the hood up. Curiosity aroused, I walked over to the gate, and Leia kept barking.

“Leia, stop! Leia, knock it off.” I didn’t want to scare the child. It quickly dawned on me somebody might’ve lost their kid while touring earlier. There were multiple gates into the cemetery, but the main one was at the corner of Abercorn and Oglethorpe. When it got closer to closing time, the only gate that remained open was the main entrance until all of the tourists were gone. Then the main gate was locked to keep people from trying to trespass at night. I thought that this poor kid probably tried to use the wrong gate to leave and might’ve gotten separated from his parents.

“Are you okay? Do you need me to find your parents?” I asked the boy. He didn’t move. He didn’t respond. I tried a different question. “Is everything okay? Did someone leave you here? Are you lost?” Leia got a slight growl underneath her breath. He didn’t even flinch.

I decided to back up and walk away, thinking I could grab my cell phone from inside and make a call to the police station about the kid who accidentally got locked up in the cemetery. I couldn’t even imagine what I would do if I were 8 or 9 years old locked in there at nighttime. I started to get my power walk on, until Leia jerked me from behind with her leash. She had stopped dead in her tracks. I looked back. Somehow the little boy was on the other side of the gate — my side of the gate. There was no way he could’ve climbed the fence that fast. Maybe the gate had been unlocked all along and I didn’t notice it. Maybe the kid was stirring up trouble by walking in past the unlocked gate and now walking back out. I turned and kept walking, trying to drag Leia with me, but she kept growling. I turned to look back, and the little boy in the hood was now on the sidewalk. My heart was racing. I started walking faster. The next time I looked back was the last time I looked. I was about 100 feet from my apartment. I turned to look. The little boy wasn’t on the side walk anymore. He was standing inches in front of my face. The hood kept me from seeing any of his features. I knew this couldn’t be any normal child. 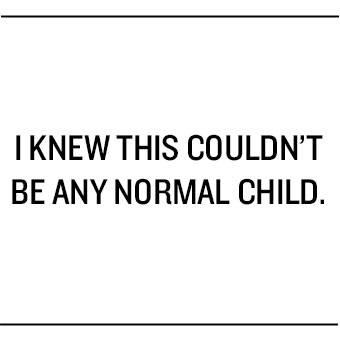 I pulled Leia behind me and ran like I had never run before. My arms struggled against her resistance. I fumbled with the keys afraid for my life to look back behind me in case this boy was behind, waiting to follow me in. My heart was pounding. I pushed through the door into the apartment. I slammed the door shut and locked the deadbolt. I kicked off my sneakers, surprised that they had even stayed on during my half-marathon to the door. I slinked down into the couch, heat and adrenaline radiating from my body. Shaking, I gripped my phone. I got on my knees and crawled towards the front of the room, and I’ll never know what possessed me to do this.

I looked out the window just enough to see that nobody was there. There was no hooded boy in sight. I called Adam.

“Y-yeah,” I stuttered. “I’m not quite sure how to put this, but I think a little kid tried to follow me home.”

There was silence on the other end.

“Well, he was in the cemetery, then he was out of the cemetery. He didn’t talk, and he didn’t have a face.”

“What was he wearing? Was it hooded or dark?” I was shocked. How would he know that the little boy I saw was wearing a dark hoodie?

“Well, back in the mid-1800s there was a boy’s orphanage just outside of Savannah. When the yellow fever hit the orphanage, it didn’t have the money or supplies to help the sick orphans. A lot of them died and were buried at Colonial cemetery. The weird thing is that new playground is where their grave marker used to be…and the orphans were all issued a dark hooded jacket for the winter upon arrival.”

I’m A Real-Estate Agent Who Sells Haunted Houses, And I Wish I Wasn’t