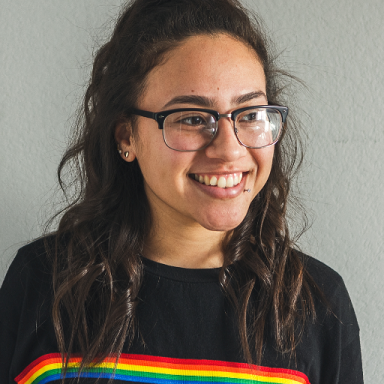 When I was fourteen…

I cared too much about people’s opinions. I couldn’t even say I liked listening to Bruno Mars or One Direction because I was afraid people would think I was uncool.

People always told me they loved how I didn’t care about other’s opinions, but I only acted like I didn’t. I was deeply insecure and was only looking to fit in—even if it meant pushing down whom I really was.

When I was fifteen…

I wasn’t passionate about anything. I would come home from school, do my homework, and watch episode after episode of That 70’s Show. I wouldn’t watch it because it was entertaining, I watched it because all I wanted to do was escape.

When I was sixteen…

I didn’t speak up or stand up for myself. I let people walk over me without ever saying what I truly felt. I was a follower—not a leader.

I was so lost, I avoided my friends. I spent my days in the library, wondering what the hell my life had become. I didn’t like being in school or at home. Where was I supposed to go?

When I was seventeen…

I picked up my first self-help book. When my senior year started, I began a self-empowerment club with a friend. I was terrified, but I did it anyway.

I became a little more confident. I forced myself to voice my thoughts, took classes I would’ve never thought of taking, and walked with my back straight.

When I was eighteen…

I graduated from high school and started a blog. I want to say that I worked hard to make it succeed, but I was lazy. I wrote because I had to, not because I wanted to.

I fell back into that place where I would watch episode after episode of Lost Girl, Buffy the Vampire Slayer, and more. I didn’t care about my life or where it was headed.

When I was nineteen…

I started writing fiction. It wasn’t until I almost turned twenty that I realized I was passionate about writing.

I took online courses, read books, and started taking writing more seriously. I had a purpose now, something that I looked forward to every day.

When I was twenty…

I quit the blog I started at eighteen because I didn’t like it anymore.

I wanted to be better. I wanted to write and share stories that were true and real. I didn’t want to be who I was when I was fourteen—fake, afraid, tamed.

I wanted to make waves and inspire people with real words and experiences they could connect with.

For years, I looked up to confident and unapologetic people who went against society’s rules and did what they loved. They were kind, read, and inspirational.

They worked hard, persisted, and beat the odds. This was the person I wanted to be.

I’m twenty-one now, and I’m far from the girl I was at fourteen.

I’m not the person I’ve always wanted to be yet, but I’m seven steps closer. Every year, I grow, I get better, and I want it a little more.

My fourteen-year-old self would love that I have goals, that I’m doing what I love—even if I’m not making much money yet—and that I’m a lot more confident.

Maybe I’m not who I’ve always wanted to be yet, but I know she’d be proud of the person I am today. For trying.

When you fall into an old habit, it’s easy to think you haven’t grown or changed. But we have setbacks. We fuck up and make mistakes, and that’s okay.

We have to acknowledge our growth

We have to reflect on who we were, then take a good look at who we are now, and feel pride.

We’ve all been through our own form of hell, and yet, we’re still standing strong.

You might be a ways from being who’ve you’ve always wanted to be, the person you’ve looked up to for years, but you’re one (or twenty) steps closer than you used to be.

If that isn’t a cause for celebration, I don’t know what is.

I can’t go one day without writing, reading, or eating peanut butter.