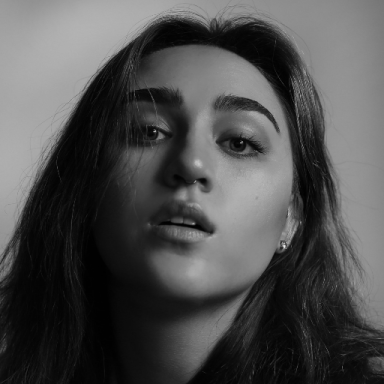 That June I started Prozac and it made me really cranky. Exotic heat trapped my pores with dirt. I stood in the deep end of the pool with burned skin and awful highlighted hair, arms resting on the hot pavement. My metabolism was turning to dust and I was mad at the sun. Mad at Jesus. Mad at the white rind on tangerines. Mad at kind people. Mad at mosquitoes. Mad. And the tears shed. Oh, that June I could cry at music. Could cry at the lack of caffeine. Could cry at TV advertisements. That June I felt bad for liking techno music. Felt bad for liking haute couture fashion. Felt bad for wanting a vacation home on Maui. Baby Bird was Prozac-ked out.

Warm June New Moon Full Moon Solstice Summer. I did a lot of what I call “Growing up, Learning stupid”. Closer to taxes, but a step back from my daddy’s clean morality. Joint in hand. Gun in another. Spilled milk. Black horizon. Waking up with egg white eyes. Rolled round high to the ceiling of an ambulance. Lying on a stretcher with a hot stranger prodding me, I wished I could see only The Boy, hug him, tell him that, for God’s sake, IWOULDLOSEMYVIRGINITYTOYOU if I hadn’t already. I’m lying there, dying there, and my red hair catches on fire. I want to be felt by his brain. I want it to touch me, touch me everywhere, from my scalp down to my toes or else I won’t survive, I simply won’t.

Montage of bike, read, pool, gym, surf, bed. A cinematic sequence played out before my eyes. Lazy loungey days and a lot of time to think. Nostalgia loved to accompany me. It went like this: She crowds me in a surrounded room. She chokes me, says that life is in the past. She reminds me that no one else remembers it the same as me; that maybe I have it all wrong. She pulls me into a stuffy closet and shoves her tongue down my throat. It tastes like sweet things I am too sad to want to remember. It feels like a painful fuck, Time laughing, “You’re really good at kidding yourself.” Her tongue tastes all wrong, like what I thought I said to Nicky I didn’t really say. What I thought I did in goodness, I only did for gain. I, too late, remember the reassurances he texted me late in the night when I was drunk and on a psychotic bender. And I finally understand why my deceased grandmother told me to, “love that boy forever”. I come out of the closet and my insides are bruised and Mom pulls me aside to help chop vegetables for dinner. I tell myself that I’ll be kind, but I end up snapping at every harmless word that drizzles from her mouth.

That June I attended summer school, and it sucked just as much as regular school. My classmates and I analyzed literature, read Nabokov and Bukowski and Austen. Studied philosophy like Nietczhe and Sartre. But, oh, how that school disregarded matters of human-to-human connection and disconnection. As I rode my bike to class in the muggy morning, I thought of The Boy quite a lot. He would probably be delighted to know that he really messed me up. I thought a lot about how humans are just tsunamis. Earthquakes, hurricanes, wildfires, stock market crashes, public shootings, births and funerals. We serial love and we serial kill. Sure, that’s just how things are, but where is the builder to nail and erect afterwards? Where is the non-profit to donate support, attention, supplies? Where is the maid to mop and dust? How frustrating that school never taught, nor teaches, us how to minimize the damage we criss-cross, tit-for-tat, intentionally, unintentionally, inflect upon one another.

I threw a drink in a man’s face at a tiki bar that June. Tried to clock a bully but missed. Brooding became my specialty: wondered what happened, where The Boy went between September and May, how dare he leave. The Boy. Le Garçon. L’homme. I had never known someone to so profusely use amorous language like him. Had I been smarter, I would have said, “You can’t use words so freely.” His words were IV fluids, his tapping fingers the needle. Sweet and heroic in nature, but just Band-Aids, just medicine that temporarily flushed the toxic sludge of my chaos out by the morning. Did The Boy know that his medicine was just misplaced love to a woman he missed? That too much misplaced love can ruin a person? Long-distance lullaby lies. Pretty when she’s some New York socialite, huh? Pretty when she acts “wifey” and shows off the dinner she cooked from scratch. Pretty when she prances around Italy during a trip that broke the bank. Pretty when her breasts accidentally fall out of the red blazer she lost 20 pounds to wear. Pretty when she unveils flowery poems born of solitary suicide schemes. Oh, but if the Boy were sitting with me that June, on the damp evenings with tropical bugs picking at my skin; I’m tired, bloated, and my face is so much more lopsided in person than in photos. Sexy, sultry nymph, fairy, princess? Hardly. More like Mortal. Human. Baby Bird. Terrified Child.

We approach July. We reach the end. Clear night sky. Damp bikini. Vanilla candles. Mix tape for making-out. Unused condoms. Baby Bird sits by the waves, waiting, and no one comes. The stars burned in paradise. Heaven was crumbling. Splintering like reality discovered to be a mere videogame. Red-eye flight and I’m leaving without him because God knows where he went — vast pool of heartbreak. THUMP THUMP dying THUMP THUMP dying. Anxiety. Jealousy. Couldn’t eat. Snapped at slow walkers. Tried to be less of a coward. Googled “how not to have feelings”. Wrote in journal: Emotional bitch. Give a helping hand for once. Began to grow up. Pursued second-rate settler love. Returned to city-girl life. Slapped back into fantasy dream girl. That June.