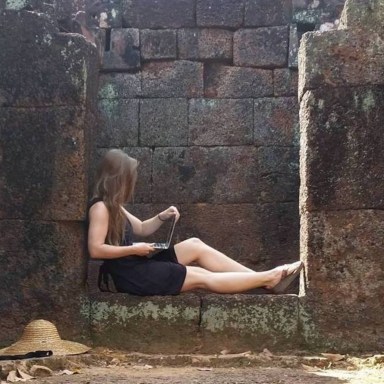 What a little hottie he is.

A couple of days ago, I met a dude at my new job. Cute enough guy, single, amazing body. I wasn’t really interested, because who wants the drama of getting involved with someone from work? I just figured we would be coworker friends.

But then, he started talking. And I realized he’s smart, too.

Interest flared up in my chest and bubbled over, filling my whole body. Coworker drama suddenly seemed not to be that big of a deal. I wanted to touch him, I wanted to have those giggly late-night pillow talks, and I wanted to feel his hands on me.

So I did what I’m accustomed to doing in these situations: I waited.

Eventually, I knew, his own interest would bubble over and he would get so uncomfortable he’d have to do something about it.

Earlier today, he started telling me about a nearby coffee house. I told him it sounded cool, and I waited.

He told me they played live music there on Sundays. I said I loved live music, and I waited.

I waited, and the obvious invitation never came.

I knew this day was coming.

Y’all, I’ll be 40 in a few months. He’s younger than me, but that’s never mattered before. Usually, when I feel a flare of interest, he (whoever he happens to be) feels it too, and he invites me to go somewhere, and things progress from there.

And I’ve gained 30 pounds (2 surgeries and 2 miscarriages and a bummer couple of years will do that to a girl).

If I had to attribute my ability to get whomever I wanted to one of my characteristics, it would have to be that I’m not interested in conventionally attractive men. Also, my sparkling personality. And my approachability. And my kindness. And I’m fun, goddamnit!

But now, guys still want to be my friend (see: sparkling personality, fun) but they’re not falling over themselves to get a date.

I’ve been preparing myself for this day since I turned 30, but now that it’s here, it’s so weird.

I’m not going to be precious about the loss of my youth and the attending loss of interest from men. In some ways, it’s more of a “good riddance” than a “so sad to see you go” scenario. I’ve always been uncomfortable with unwanted attention, and there are so many things in this world that I love that have nothing to do with my looks.

Nor am I going to be upset with men. They can’t help that they’re primarily attracted to youth. And the joke’s on them, really, I was a complete asshole before age 29 or so, and I think most women are (at least when it comes to dating). If anything, I think this obsession with youth is their kryptonite. Poor fellas.

The real problem is I don’t know what to do with myself in social situations anymore. The rules have changed and I’m not sure how to act.

Many of my friend groups originated with a date. It’s the easiest way to meet people. I have to recognize that dating has long been my social jumping-off point.

Throughout my 20s and 30s, when I moved to a new town, in order to meet new friends, I would just go on a few dates. Once, friends of my date waited until he went to the bathroom and said, “Quick, give us your number! We don’t know if you’re going to keep seeing ___, but we want to hang out with you again regardless!”

Left to my own devices, I’d just chill at home reading a book most nights. But I’ve never really been left to my own devices. I’ve always had a date, or been invited to a party, or some other activity because some guy wanted more time with me. Likewise, I never lacked conversation at clubs or parties or (how I hated it) even in the grocery store. There was always just some dude.

Now, I move through my days more or less unmolested, free to think my own thoughts. I can sit at a party and not talk to anyone for what feels like ages. The invites and phone calls have slowed down. Sure, I still have all my female friends, but many of them are married and have kids, so my social life is kind of up to me.

At age 40, I need to learn the skill of reaching out to others.

But not to my coworker. I mean, let’s not get crazy here. I wouldn’t have the slightest idea how to initiate things. I can hear him in his hotel room next door, blasting music. I mean right at this moment, the guy is blasting Elvis’s “Can’t Help Falling in Love,” for god’s sake. Which is, let’s face it, adorable.

Five years ago, heck, even one year ago, I would have thought that music was his shy way of calling me to him. But now, I know that’s probably not true.

I love being alone. That’s part of why I’m still single (the other part is a set of raging emotional issues, I’m sure, but that’s a topic for another time). But I also realize that being alone this much probably isn’t healthy.

So how do I do this? How do I reach out and meet people now? I know I’ll get lonely if I don’t learn to reach out. It was just so much easier to let people come to me.

Stories about nomadic living and single motherhood by choice.