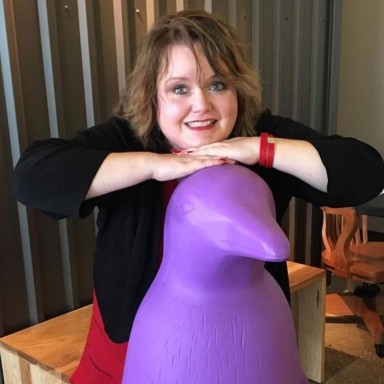 My dad lost his battle with cancer 13 years ago, just a few weeks after my brother moved with his family to another state as part of a job transfer. After the funeral observances ended and everyone had gone, my mom and I looked at one another. Simultaneously, we said, “Well, it’s just the two of us now.”

Up to this point, we had all lived within a two mile triangle of one another. My brother, his wife, their three children and I convened at my parents’ home for dinners every weekend. We celebrated birthdays and holidays and just because days.

Despite my parents both coming from large families, we’ve never celebrated holidays with a big slew of relatives. It was comfortable with our tight family unit and the occasional friend or relative joining us for a meal.

Our lives totally changed that summer and fall of 2006. It is most noticed during the holiday season. Rather than dwell on what has past, we have made new traditions. My brother and his family often visit us in shifts due to his job responsibilities.

Several years ago, just a few days before Christmas, my mom and I decided we didn’t want to cook for just the two of us. It has now become our tradition to celebrate A Christmas Story style — at a local Chinese restaurant.

Facebook memories pop up to show that our holidays have been anything but traditional the last several years. One year we made lasagna on Thanksgiving. Another year brought a shrimp boil. Some years we’ve prepared and taken meals to shut-ins with HIV and AIDS.

Three years ago, I became one of “those people” who wakes up early on Thanksgiving and completes a 5K with friends. Last year we celebrated our accomplishment with parking lot mimosas. It’s but another tradition I’ve made for myself.

When major change happens, forge new traditions. Make new memories. I think of the holidays as a time of reflection, but I don’t dwell on the past. Do I wish my entire family could still celebrate Everydays like we once did? Sure. Though I really like creating a new path.

I’ve been telling stories through the written word since I was 12.