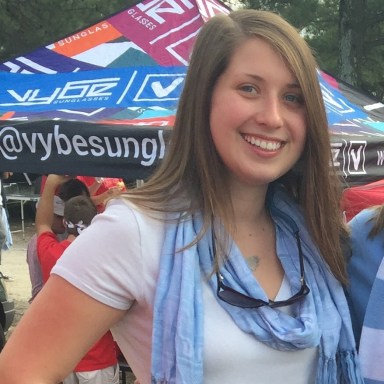 He was the boy in the country songs, in his Chevy Silverado with his concealed carry permit in his wallet and a southern state flag tattooed on his arm. She was a liberal girl in the Bible Belt world who’d had her heart broken one too many times, but thought he might be different. He showed a little interest, a little kindness, and she had no chance.

He washed in with the hurricanes, and as much as she tried to fight the future, fate was always going to find her.

On the first date, he told her his tragic flaw, and she thought about running because that wasn’t what she wanted. But she took a deep breath and she stayed.

She stayed, despite the fact that she should’ve known better this time. Despite his secret, she thought he was good.

On the second date, he cooked her dinner. On the third, he bought her jewelry and gifts. He courted her with flowers, and she never saw through the facade.

On the fourth date, he came to see her and convinced her to let him stay the night.

On the fifth date, he promised he had no intentions of hurting her. On the sixth, he smoked a cigarette on her back porch and gave her his smoke-scented sweatshirt.

On the seventh date, he took her home to his mama, and on the eighth, he promised he’d see her again soon.

On the first day after, she told herself that he was busy. On the second, she picked up the phone to call him. On the third day after, she hid her phone away.

On the fourth, she hid herself away.

On the fifth day after, she knew his promises weren’t meant to be. On the sixth, she prayed she’d run into him soon. On the seventh day after, she thought she might be better off, and on the eighth she realized she’d have to start new.

On the ninth, she knew she would make it if she could just get through one more day. For nine was her magic number that washed the pain away.

On the tenth day, she blamed herself. On the eleventh, she blamed him. On the twelfth, she thought maybe his flaw got the best of him.

On the thirteenth day after, she heard a rumor he thought they didn’t have anything in common. On the fourteenth, she reminded herself that liars lie best.

On the fifteenth day after, she washed him away with the cold winter and admitted to herself that she deserved better. She packed away his smoke-scented sweatshirt, taking comfort in the thought that maybe he had lost a piece of himself, too.

He was the boy in the country songs who drove off chasing his dreams, and she was the girl who caught hers in the dust of him.