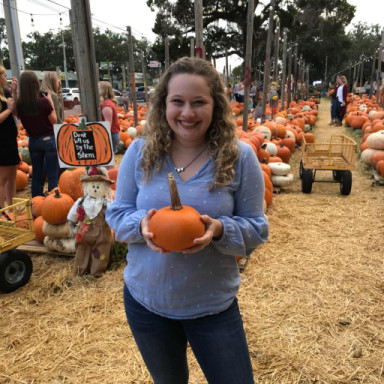 I always had trouble losing weight, but it became more prevalent during my high school years. Freshman year I gained more weight than I had in the past. I hated my body. I hated my face. I hated everything that made me different. I would jealously watch my friends during lunch bring a bag of chips, cookies and a sub sandwich every day to school while I would eat apple slices and a salad.

I had tried everything. I went on Weight Watchers, a diet that was about portion size and eating healthier alternatives. I lost only half a pound the first week on the diet. This wasn’t a huge change, but it was better than nothing. The next week I didn’t lose a significant amount of pounds. I was discouraged and felt the need to eat a whole cake after a lack of victory. I was weighed every week.

One week I came from the gym and prayed the hour workout would already kick in, having the scale read the magic number like I had the lucky lottery numbers. When I was told I stayed at the same weight from the week before, I was confused about how sweaty barre sessions didn’t help shave off a few decimal points. It was only the third week of the diet when I quit due to lack of motivation and discouragement.

I couldn’t understand how eating healthy food wasn’t letting me shed the pounds quickly. My initial thought was if there was something wrong with me, what was it? What did I have to do to be within a normal weight like my friends?

It was when I had my annual check-up with my pediatrician that I broke down in tears. Here I was vulnerable. My skin wasn’t shown but my numbers were. Numbers that always defined me. Numbers that were always too high. That’s the thing with these doctors. I was always just a number. Just a statistic, the wrong statistic.

Later I found out from my endocrinologist I had polycystic ovary syndrome. PCOS is a hormonal disorder that causes women to overproduce testosterone. Its symptoms include cystic acne, difficulty with weight loss, and excessive hair growth on the body. Once diagnosed with this condition a weight was lifted off my shoulders. For once it wasn’t my fault. I was no longer in the statistic of an overweight female. I was one of the 10 percent of women with this medical condition.

Although 10 percent is not a huge portion of the female population, I didn’t feel alone anymore. The PCOS community has women from all different backgrounds, body types, and the symptoms that affect them. PCOS gave me the empowerment to look past the numbers and “ideal” body image because it looks different on everybody. It’s all about your body chemistry, something genetically you can’t change.

I became my own role model for body image. Those numbers don’t define me anymore. They shaped me into who I am today.

Just a girl with a love for words.