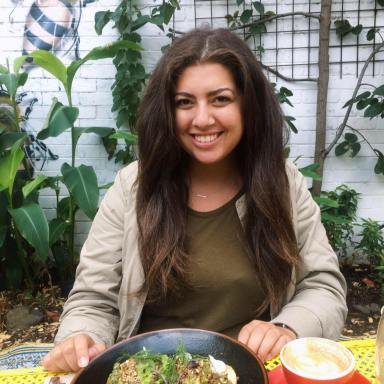 There’s an age old saying that if you travel far enough, you just might find yourself. Well, I‘m writing this to say that I just returned from an 8 month adventure through Asia and Australia and I’ve never been more lost.

In high school if I were to choose one word to summarize myself, there’s a good chance I would say motivated. I was extremely hard-working, I did well in my classes, I had a really close group of friends, I was editor of the yearbook, I founded a new club, and I always had a plan. I had dreams of attending Western University to study Media, Information and Technoculture, and when I received my acceptance letter in February of grade 12, I couldn’t have been more excited. Getting into this media program was just the next step in my plan to ultimately have a creative career in the media industry.

Then came the big scary reality of university. My workload and stress levels skyrocketed, but even amongst the pressure to do well, I always had goals. I joined a sorority, I wrote for Spoon University, I was recognized for my academic achievements on the Dean’s Honour List, and I always envisioned myself pursuing further studies post-graduation – perhaps in advertising, copy writing, or even law school.

But in my third year of university I embarked on an adventure that took all these plans and threw them out the window. I decided to take part in an International Exchange Program. After over a year of applying to schools, arranging visas, and coordinating living arrangements, I boarded a plane and took off to Singapore. I was excited, my parents were nervous, and my friends were jealous. I was treating this exchange as my personal reward for the hard work I had put into my education over the years.

The beauty of participating in an exchange program (for most schools), is that grades are irrelevant. I was completing my courses on a pass/fail basis, and for the first time in years, the pressure to do well was gone. It didn’t matter whether I finished a course with a 60% or a 90%, because these grades wouldn’t be on my university transcript. So, I went against pretty much everything I had ever believed and coasted for the semester. I went to class and did the assignments, but I handed in very average work. My weekends were spent travelling around Southeast Asia, and the hours I used to spend doing homework, turned into hours spent researching my next travel destination.

Within a couple months of travelling, I came to a pretty big realization: I needed to stop planning. I found that as I did less research, I became more open to different experiences. When I had planned out my weekend itineraries, I felt a constant pressure to stick to my plan, and didn’t truly open myself up to spontaneity. But the reality with travel is that you can’t plan for everything. Flight delays, weather problems, and language barriers are inevitable. When I stopped micromanaging my days, I became more adaptable and overall, much happier. In fact, I realized that the few months I spent travelling had been the happiest months of my life.

So, I did something a little crazy. I decided to leave my summer job that was waiting for me back in Canada, and find work overseas instead. My job search ranged from teaching English in Vietnam, to working at an Elephant sanctuary in Thailand, to Au Pairing in Australia. I didn’t have a plan, and that didn’t bother me. I was open to any job opportunity, as long as it would allow me to afford the expenses of living abroad.

In the end, I decided to Au Pair in Australia. I think my parents breathed a sigh of relief when they learned I wouldn’t be spending four months living in Asia alone. But, I wasn’t doing this for anyone other than myself. I had spent so much of my life working towards societal norms that deep down I didn’t believe in. There’s an unspoken idea that in order to be successful we need to do well in school, attend a top university, and start a career straight away. But that doesn’t work for everyone, and I started to recognize it certainly wasn’t working for me.

I spent the next four months working for an incredible family in Australia. While I was there I made some of the most amazing friends from all over the world (Germany, England, South Africa, America, and the list goes on). I had never felt more independent, but I also had never felt more confused. What was I going to do with my life? How could I just go back to my senior year of university and pretend these 8 months never happened? Was I going to remember how to study for exams? Would I ever be this happy again?

Well, now I’m back completing my final year of university, and I still hardly know the answers to these questions. My friends are busy signing contracts to work for big companies, applying for grad schools, and in some cases, have graduated early and are already working. I don’t think I found myself, but I do think I learned a lot about my passions, and I’ve definitely discovered what I don’t want to do with my life.

I don’t want to go into a post-graduate program right away or start working towards my career. For a girl who has always had a plan, I’ve never been more lost, and I’ve never been more ok with that. Travelling opened up my perspective of the world, and although I may no longer have a specific check list of my life, I now have a much broader goal: to be happy. I hope to continue to travel, fill my life with amazing friendships, and wear a big smile each day. If I can find a way to ultimately make enough money to live comfortably while pursuing my passions, then that’s all the success I need.

So no, I don’t think I found myself; but I sure as hell have discovered what makes me happy.

Hannah is a media student and avocado enthusiast.