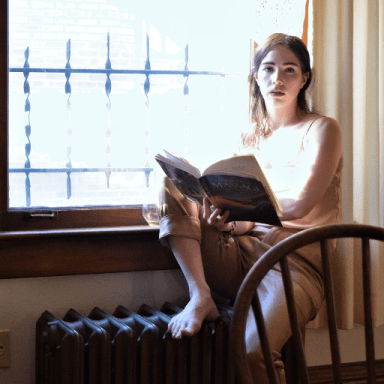 Something in the slope of the young man’s brow shadowed his eyes looked poetic in some lights, and in others savage. The young man’s family had money and his arms once wore constellations of pinpricks.

By his account, they were borne out of boredom rather than a tendency towards addiction. They faded two years ago, he said, because of three reasons: the inevitability of the survival instinct, the narcotics anonymous program, and a story about his last relapse which, when told sitting cross-legged on his bed in the light that made him look poetic, made any girl’s face turn questioningly towards his from its blunt unlikeliness.

Those pale forearms and his eyes beneath their awnings made him irresistible to a certain kind of young women; he could have sold stars with his innate mastery of the use of meaningful silences. The combination of his reputation and his quality of unknowability had an especially strong effect on Z.

Z was the only daughter in a large family and an ugly child, then one day looked down at her body and saw that she had ceased to be. Her left breast still ached at the sound of her brothers’ coughing, but an intense competition that had been dormant in her awoke.

The measure of the young man’s desire for Z was hard to decipher even after she had spent the night, and became a metric for her self-image and its day-to-day changes. When she dared to tell him she loved him it was a high-water mark, and when she left him in bed and mounted her bicycle at sunrise without touching him it was low tide.

She slept with others. The way that Z thought of it, she was stopping at roadside attractions on the grand highway of her life, rather than staying even with her suspicions.

During this period, she met a boy she was only attracted to until he took out the metal circle he wore in his lip. Another time she invited home a man with pale blond hair that was as fine as corn silk because she was curious if the hair above his cock was the same.

The last was a man much older than herself who walked in on her while she was in a bar restroom with a busted lock. Instead of apologizing and walking out, he had stood in the open doorway, watching until she had finished. She didn’t leave his side for the rest of the evening, then she followed him home.

She thought of herself as a creative and that this was what made it so easy for her to fill empty spaces.

When the young man with the scarred arms filled the empty space he preferred to stand. He gazed down at her while she laid on her back, pulling her towards him by the waist until her ass was at the edge of the bed as if for a gynecological examination. He always fucked her with his eyes open, with his line of sight strung to her face even at the moment he came. Z began to crave the staring contest. The first time they had sex he told her she had a wolf’s eyes.

The nights that she stayed over with him – no more than once a week and always at his place – she blamed herself if he couldn’t sleep. Her humiliating affection radiated from her like summer heat.

As restitution, she entertained him with stories. She lowered her voice to a whisper and tried to speak as slowly as she could. In these moments she pictured herself slowly disappearing, becoming a mist or a delicate insect that could crawl inside his ear and unfold into a dream. It never failed.

Some of the narratives were improvised and some taken from memory, some were about him, and some told in second person, like a prediction of what he would do in the future, or things he had done that she couldn’t know about. Some stories were just retellings of fairytales she half-remembered. Often she became so wrapped up in her story that she wouldn’t know at what point he fell asleep, and as a result of that, she never knew how well he knew her.

If she could, would she want to? It isn’t my business, but despite her professed love I suspect there was very little about him she wanted to know.

Of the dozens she told over the eight months she did this I can only remember one of the stories Z told.

She was lying on her side facing him while he splayed on his back, not so close that her breath would move the hairs near his ears and irritate the skin but close enough her roommates couldn’t hear her whisper over the hum of the ancient air purifier.

Z told the young man, In the dream, I had last night I met Spalding Gray.

He was standing with my friend on a bridge, talking animatedly about something personal between them, making the same gestures from when he would perform his monologues, moving his hands out from his chest over and over as if he was opening himself up like a can of sardines. Then I remembered that he committed suicide in 2004 and his black corduroy pants were found in the East River. And I walked over and said, I had been told you were dead.

What I was thinking about was that I had read his diaries. They were as horrible and pathetic as mine would have been, even perfect-bound and archival and I would never want anyone to compile and read my diaries so poorly edited were I still alive. I felt guilty about that but still honored to meet him. Then I realized we were not on a bridge, but a ferry, right there on the same ferry where he did it, and he was lying there beached out of the water like a harpooned whale washed ashore.

It looked as if the young man was asleep, but in case she was mistaken, and in case he didn’t know who Spalding Gray was, she began another.

Michael’s Little Brother Had Been Having Dreams About A Demon, What Happened Next Was Brutal And Terrifying

Horror On The Cellblock: 34 Grisly And Sickening True Stories From Prison Workers

Horror On The Cellblock: 34 Grisly And Sickening True Stories From Prison Workers