I first began reading the Harry Potter series when I was in third grade. I stubbornly refused to wait for my school’s library to get The Sorcerer’s Stone back in stock, and so I began with The Chamber of Secrets and then read the first book. I then proceeded to finish the four books that were out at the time within two weeks, and I read The Order of the Phoenix when it came out that summer within a single day. As you might have guessed, I was obsessed with the series. I had stickers all over my room from The Chamber of Secrets film, I had Harry Potter sheets, and I listened to the Harry Potter soundtrack on repeat endlessly as it was the only CD I owned at the time. But despite this obsession with the series, I never liked Harry as a character.

When asked who my favorite character was, I would instantly respond with, “Hermione!” or “Draco!” (yes, even as a child, bratty little Draco was my favorite). But it’s not that I just never thought about Harry Potter and was indifferent to his character, I remember adamantly not liking him. When asked, “Well, what about Harry?”, I would respond with something akin to, “No, I don’t like him!” As I got older, I was able to expand upon why I didn’t like him, and with each new book he seemed to provide more reasons to hate him. He literally did nothing to prepare for the First Task? Stupid. He yells at his friends all the time and refuses to listen to them until he does something rash and is later proven wrong? Cue eye roll and head shake. He isolates himself and constantly mentions that his parents are dead? Yes, we know they are dead, Harry, but at the moment there are more relevant things going on – please do stop. 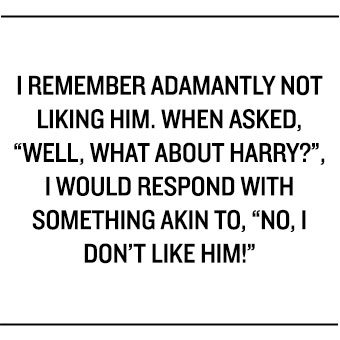 The extent of my dislike toward Harry can be seen in the following scenario: I ask some friends which Hogwarts house they think I would be in, knowing of course that I will only analyze and dismantle their theories. They say I would be in Gryffindor or Hufflepuff, though the answer is, more often than not, Gryffindor. I then launch into a lengthy explanation about why that does not fit my character, and why Slytherin is the only option that makes any sense logically. But they still insist that I am “too much like Harry,” and that I would definitely be in Gryffindor. This situation happened far too often, and each time I was outraged. What on earth could they possibly see of Harry in me? However, it was only within the last year and a half or so that I began to realize why I didn’t like him, and the answer is surprisingly obvious.

Throughout my childhood, I would say that I grew up in a household that was very much like the Dursleys. I was treated similarly to how the Dursleys treated both Harry and Dudley. On the one hand, I was the only child. I also was adopted, and so my very existence was something that was highly valued to my parents. As such, my parents would try very hard to get me things that I enjoyed and I usually was not left wanting for much. But on the other hand, my parents (especially my mother) suffered from a mental illness, which unfortunately was not helped by a stressful financial situation that happened to coincide with the time I began reading the series. The house in which I had spent the first eight years of my life foreclosed because they could not afford the mortgage, and where we moved to next was in a bad area of town. The townhouse itself was riddled with mold.

Now what did this entail for me? This meant that every day, my parents screamed at each other, my mother routinely threw large objects (such as vacuum cleaners) down the stairs, my father took to physically abusing me, and my mother denied the existence of the abuse while simultaneously emotionally abusing me herself. My mother was very overweight (not unlike Mr. Dursley) and could not move around very much. Going downstairs was almost an impossibility and she rarely left the house. My father was very skinny (not unlike Mrs. Dursley), did all of the housework, and was the sole source of income. However, the house was not well-maintained like the Dursley’s – in fact, it constantly reeked of cat urine, my mother hoarded papers and objects which left large stacks of things atop every table, chair, and counter top, my hair had a massive knot on the back of my head due to neglect, and my clothes were tattered and shabby like Harry’s.

How did I handle this situation? Not exactly well, but much differently than Harry handled his (or at least I perceived it as such). I was depressed and took to self-harming to cope, and I eventually told my friend about the abuse and the self-harm. I was eleven at the time, and rather than going away to a magical school at which I would find friends, wonder, and excitement, I was instead removed from the home at the end of the school year of sixth grade. I was gone the whole summer, spending half of it at a Children’s Home and the rest at my aunt’s house. (Coincidentally, this was the summer that The Half Blood Prince came out. I spent an entire day reading it, which prompted my aunt to decide it wasn’t healthy and took it, along with the rest of my books, away.)

After that miserable summer, I was returned home, went back to school, and life continued on. While my parents’ household was better in that there was no physical abuse, other things remained the same. My mother’s weight issues and mental illness had not gone away in my absence. I was blamed many times for “tearing the family apart” for reporting them in 2005, and was told that “everyone walked on eggshells” because of me. Additionally, I was told that no one knew when I was going to “turn on [them]” next. Now, these instances were not constant, but they happened frequently enough to know that it was more than just a passing, regret-it-instantly type of statement. My father became passive and my mother used that to her advantage to verbally abuse him, all while she became increasingly limited by her weight and her refusal to seek help. As the years went on, her abuse toward my father got worse and I withdrew as much as I could. 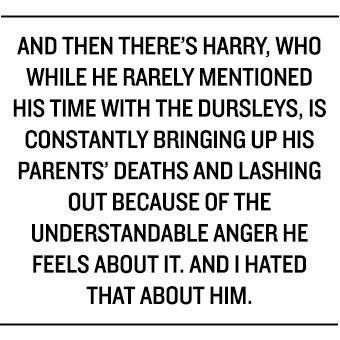 But none of my friends knew about this. Not a single one. Granted, they knew my mother was “crazy” and that I never wanted people to come into my house, but that was it. I never mentioned it.

And then there’s Harry, who while he rarely mentioned his time with the Dursleys, is constantly bringing up his parents’ deaths and lashing out because of the understandable anger he feels about it. And I hated that about him. How dare he lash out? How dare he keep bringing up his parents’ deaths? Smart people kept quiet about the atrocities of their past. Displaying such strong emotions so openly is practically a crime! Didn’t he know that? How could he be so stupid?