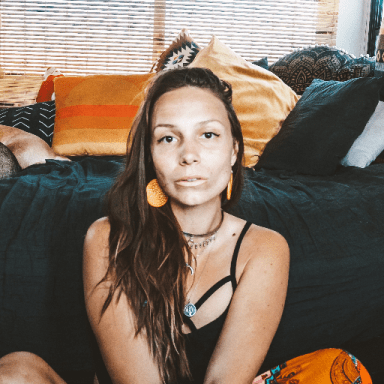 I still feel it sometimes.

Not often, but every once in a while, I feel the low snarl of envy creeping up my throat when I’m threatened by another woman.

To be clear, I’m not talking about a woman who is mistreating me or someone else, I mean a woman who stands out. A woman who seems like she’s killing it. Most often, she happens to be accomplished in something I am deeply insecure about.

Sometimes the envy manifests itself in defensive judgmental thoughts.

“Who does she think she is?”

Other times it emerges in self-judgements and self-pity.

“Look at her go. Why can’t I get my life together enough to do that?”

Both responses are based in envy, and recognizing and unlearning these conditioned responses has been a process.

I am competitive by nature, and it took a long time to realize that when I did have those feelings, it was never about the other woman.

It was about me.

So I’ve learned instead to treat that trigger as a sign. A sign that I’m not fully showing up for myself and my dreams.

You see, if I’m feeling envious of someone, it means that they remind me of something that I am not confronting in my own life.

This could be an insecurity.

Or something that I feel a deep desire to do and be good at but am too scared to pursue.

Or even something that I have only been half-ass pursuing and not giving my all to. That way, if I failed, I could say, “Meh, it’s okay, I wasn’t trying too hard anyway. I didn’t actually care that much.”

Which isn’t actually giving myself a fair chance to succeed.

Part of being human seems to be that our perception of the outer world is a reflection of our inner world.

Painful emotions such as envy are not evil by nature, but rather gifts, messages from our inner consciousness that we are not honoring ourselves.

And this societal story that we as women must constantly be competing and measuring ourselves against each other blocks and distorts those messages.

But that story is decaying. Rotting. Becoming as old and irrelevant as the people who run the agencies that still perpetuate it.

You can feel it, can’t you?

The new story bubbling to the surface?

A story of a sisterhood that is diverse, visible, powerful, and untamed.

And together, we rise.