It was a day or two before my return to New York. I was at a kimbap jip in Yeomni-dong–a little hood in Seoul where I was living during the duration of my year there. I was too hungover and broke to get anything else. I ordered two rolls of kimbap. One with tuna and perilla in it, and another regular one with just the usual few things–spinach, ham, egg and daikon. My bill was still under $6.

While eating alone, I looked out the open shop door and stared at the sunlit street. It was pretty still. Pedestrians were walking every now and again, but for the most part, the neighborhood was quiet. I saw a woman walking with a little basket full of shampoo, conditioner and a green exfoliator towel, headed to the bathhouse. I felt my hangover nausea come at me in small, threatening waves. I shut my eyes and thought about my future waiting for me back in New York. Where would I work? What would I do? Where would I live? What would I do? What did I want to do? Typical unemployed early-twenties existential grievances reverberating throughout my head.

The old woman who worked the kimbap shop solo brought the two rolls to me on a wooden block. Then another elderly woman entered the shop and sat down next to the cash register on a small fold-out stool. She started talking about her daughter.

The kimbap lady immediately responded to her friend’s story with appropriate nods and positive sounds of “Mm’s” and “Eung’s” while cutting a cham-oe (it’s a yellow fruit the size of an apple but more elongated, with white stripes around it, and is a relative of a melon). She peeled the yellow skins off with a dull fruit knife. The peels were caught in a plastic red mesh bowl. She cut three slices then reached across the shop from where she was sitting to where I was sitting, placing them on the wooden block where I was eating my kimbap–all the while not missing a beat in the conversation with her friend. The cham-oe slices still had some of the seeds and the sticky fruit nectar from the melon’s center clinging to it. They shined under the fluorescent lights above us. I saved them for after my meal. After I finished my kimbap, I ate the fruit, savoring the crisp sweetness.

The cham-oe slices being placed on my wooden block of kimbap was the most naturally intimate experience I’ve ever had in Korea with a neighborhood aunt at the kimbap jip that I’ve never even been to before. This woman was in every way a complete stranger, and yet she was my eemo because I’d been brought up to trust other Koreans as members of my family. Everyone’s an auntie and uncle. I immediately began to grow nostalgic for the space I was in, especially because I’ve been told time and again by family members that this connection and web of intimacy was specific to Koreans. I hadn’t even left yet but I knew that I was going to miss this: Waking up hungover, not thinking about where I was due or where I was going, just going around the corner to a local kimbap jip, hanging with an old woman who cuts fruit slices for me to have just because she was cutting some for herself and her friend–finding it completely natural to share them with me.

My flight back to JFK was a couple days later. Throughout the summer and fall of 2010, I dealt with returned-ex-pat depression and the residue of the 2008/2009 crash full on back in New York for an entire year. I started writing my book two months after my return. My depression had heightened my senses. I was missing everything both back in Seoul and back in New York; I felt like every moment was precious, both the present and the most past. I needed to save them in a book.

I found that cham-oe intimacy here, too. I had plenty of moments like that at the deli. I really did work seven days a week, doing my weekend gigs there. I did it for less than a year before I was laid off. That net of community, though, was as intimate for me as the cham-oe moment with the old woman at the kimbap jip back in Korea. I had coworkers at the deli who would read the Chinese newspaper and call numbers to help me look for a cheap apartment deal. I had Latino cooks bring me sandwiches and cakes whenever they celebrated someone’s birthday or had family meal together. I shared hysterical, hearty laughs with complete strangers from different parts of the world who were in town just on tour. For all the lousy things New York and its people are known for, in more ways than one, my experiences at the deli are some of the most precious to me because of the connection I felt, and the strong sense of love and care shared for one another even though we were all from such different worlds. A strong connection is possible when we regard one another as family and with a sincere willingness to listen. My book was in part an exploration of finding a familiarity in those we see initially as strangers, and making connections by putting aside our usual tendencies towards neglect and disconnect. Writing this book was overall a positive experience. 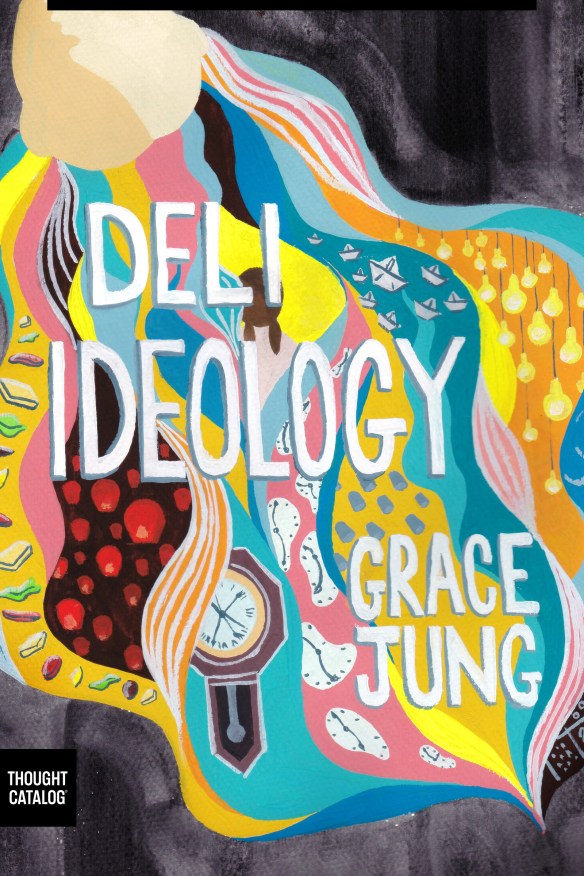 7 Heart-Wrenching Novels About Millennials Trying To Figure It Out

A Young Writer’s Diary Entries From Late May, 1984

Dear Aspiring Writer: What Does Writing Mean To You?