I’ve spent over 1,000 days traveling and living abroad, and while some of those days I feel equipped to run a nation, and other times, I’m a mere breakdown away from resorting to pampers, the happy medium in there reminds me that the growth has been incredible over time.

And for those who are about to embark on long-term travel for the first time, I hope this post can help give you some insight as to what there is to know about the crazy world of travel.

1. A%$holes have no ethnicity, religion, or location. They’re everywhere.

Just the other day I was flipped off by a teenager on a bus. No reason. Maybe he thought it’d combat his bad day or something.

Then there was that other time a robust, French lady shoved me out of the way for not opening the metro doors fast enough in Paris.

And oooh my favorite, the American guy I met in Germany who told me to avoid Turkey like the plague, because he’s “pretty sure that’s where all the terrorists are”.

So whether I’m being cursed at for not walking fast enough in London or being looked at like dirt in Prague, a%$holes are (un)fortunately populated in every nation in the world.

God didn’t discriminate. He made sure every country would have to tolerate these buffoons, and whether their a%$holery was gradually developed or a trait they were born with, let’s just stop trying to make it our problem and let Darwinism take the lead with their existence.

So when you encounter one on the road, don’t take it personal or allow them to ruin an entire destination or travel experience for you.

2. Become a “YES” gal. They make for the best stories.

I met a guy Dace, from San Francisco, while traveling in Jordan, and when we were swapping stories, he reminded me of the importance of being a “yes” man.

And how saying “yes” to every offer and conversation led to one of the most unforgettable days he’s ever had while traveling. And I couldn’t agree more.

Invited for lunch by customs officers at the border in Cyprus? I said YES.

Climb a dangerously steep, massive rock to watch the sunset in Petra? I said YES.

Explore a new city with someone you know from Instagram? ALWAYS SAY YES.

3. Learn to let the universe play its course.

Missed your flight? It happens! Stay an extra day and do something ridiculous and unforgettable.

Get super lost? Good news! There’s something everywhere you turn, so you’re never technically “lost”, just completely opposite of where you initially intended to go 😉

The hot guy you met has just left? No worries! He probably has a girlfriend and was looking for an excuse to cheat on her. Dodged a bullet there, soldier. Chat it up with the other guy who’s been eyeing you instead.

Whether it’s patience, resourcefulness, or destiny that the universe is trying to show and teach you, allow it to do its job.

If everything always went as planned, we’d all be billionaires, right? 😛

4. Surround yourself with like-minded travelers.

As someone who spends her days constantly pouring inspiration, motivation, and empowering words into the lives of others, you get to a point where you exhaust all your energy and need to be refueled by the words and inspiration of like-minded people.

If you drain your mind of all the hope and encouragement you constantly give others, then there’s nothing left for you.

Seek mentorship and surround yourself with those who fan your flames, not extinguish them.

Life happens to everyone, and it’s important to look after your mental health just as much as your physical health.

You are not above getting help for anything you go through just because your life is coveted or romanticized by others.

6. Know your privilege and don’t abuse it.

Keep your privilege in check and don’t ever mistake it as an unwavering right.

Check in with her as often as possible. Any way you can. Calls. Texts. Photos. Skype. Whatever.

There is no such thing as over-calling the woman who brought you into the world that you’re currently exploring.

8. Document everything. In multiple ways.

It’ll be SO valuable [for you] down the line.

The one thing you’re promised is your nows and todays. So document them!

Remember them in their purest form by writing and recording those moments you want to keep forever.

I wish I took more video of my travels back in 2012. Video is as raw as it gets and whether you do anything with it or not, you’ll have something to laugh and reminisce over years from now when Facebook reminds you that this cyber gold still exists.

9. Don’t confuse a magical moment for a magical guy.

Ah, yes. The inevitable. Falling in love on the road.

You’re sitting on a hilltop, overlooking the sea, fireworks lighting up the sky from some random local festival that gave you another excuse to drink, and you’re sharing that moment with a guy you met a few hours ago.

All of a sudden, you’re planning out your exotic happily-ever-after when he’ll just turn out to be a miserably-never-again.

You ignored the red flags, because when in Rome, right?! Wrong. Because you’re in Barcelona. But also, no. Lol.

Follow your heart, but take your brain and morals with you. I promise you, the two can coexist despite what our Jersey Shore generation wants you to believe.

10. Travel for more than just the fun of it.

Travel to learn. To challenge yourself. To earn trust. To make friends. To lose friends. To experience heartache. Poverty. Refugees. Corruption. Politics.

Travel to change more than just your profile picture, because there is so much to gain from this invaluable experience.

Glo is a world traveler and author of the new book From Excuses to Excursions, available here. 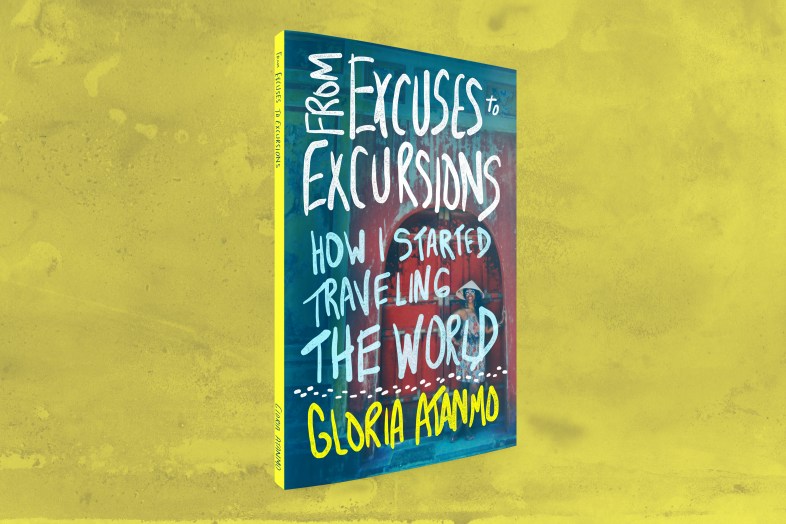