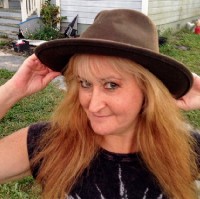 Staying at the Hard Rock Hotel sounded like the perfect weekend, never mind that I was spending money I didn’t really have. I somehow felt entitled to bask in the lap of luxury for a couple of days despite the extremely high price tag, and I was dying to have some fun.

After I checked in, I called some of my friends to hang out with me for the night. I also called Micah, the guy I’d been seeing for the past month. My friends would be disappointed in me for including him, but I believed if they got to know him better they would see that he was a good guy. I chickened out on telling them that Micah was coming, letting myself believe it would be better as a surprise.

They were surprised, all right. Micah proceeded to get so drunk he could barely stand up straight. He hollered after other women who passed our group, telling everyone how happy he was that his relationship with me was “no strings.” The highlight of the evening was when he pulled his pants down at our table in the Mexican restaurant inside the hotel. When I checked out of my room and returned home, I discovered Micah had demolished every bottle of alcohol in the mini-bar twice over to the tune of nearly a thousand dollars.

It didn’t take long before my friends called me on the phone, one by one, and told me that Micah was a loser. They wanted me to dump him as fast as I could. Meanwhile, Micah had tears in his eyes when he told me how bummed he felt that none of my friends liked him. It made me feel sorry for him and protective of him. I still believed my love could change him and make him into husband material. He seemed so damn sincere when he told me he wanted to be a better man who treated me like a queen. None of it was true.

I took Micah’s side over my friends and continued to date him, move in with him and eventually marry him. Every single friend told me to get rid of him and never speak to him again. I didn’t listen to any of them and instead spent eight years of my life trying to fix a pathological narcissist who instead controlled every aspect of my life.

It must have been so frustrating for all my friends. They practically begged me to leave Micah only to watch me stay with him. Sometimes I even went as far as to actually leave him at the urging of a friend, but then I’d betray that person by going back to him over and over again. I lost a lot of friendships that way with people who went out on a limb to help me and got the punch in the face of finding out I was back with Micah. Some of these friends never talked to me again.

Micah had me convinced that nobody in the world would ever want me or care about me other than him. He played upon my biggest fear of abandonment and scared me out of my mind. He swore he would replace me in five minutes and that I had excess baggage that made me ineligible to ever date or even marry another man again. I believed him. I hung on every word he said. I let him decide what my worth was and agreed when he told me it was nothing.

I should have listened to my friends because they viewed Micah with an objective eye. Being so close to the situation, I couldn’t see what all of them saw so clearly. Micah was a man out for himself. He stripped me of my money, shattered my confidence in myself and caused me to lose custody of my children. There was no getting away from him. No matter how much my friends did to help me, his love was like a drug that he doled out in small amounts until I was addicted to it. I was terrified of him but afraid to leave as well, especially since he told me I’d never make it without him.

Micah told me I didn’t need my friends as long as I had him. Before long, I was left completely isolated, which was the way he preferred it. He didn’t want my pesky friends getting in my head and telling me the truth about him, and his wish eventually came true. My marriage became too painful for my friends to watch, so they stopped looking. I don’t blame any of them for being upset with me. Now it’s easy to see where I went wrong, and I’ve spent the last seven years trying to rebuild friendships with people who swore they wouldn’t talk to me again.

Our friends only want the best for us, and we need them for their honesty. Any true friendship involves somebody who will tell you the truth when you need to hear it. They are thinking of our best interests and want to see us happy. What other motives could they possibly have? Maybe the person you’re dating has motives that don’t involve your well-being and you’re too close to see it.

It’s vital to cherish the relationships we have with our friends and appreciate their honesty. After I left Micah, a few lifelong friends of mine came around and helped me get through it. I don’t think I could have survived without them, and I thank God they cared about me enough to give me another chance. I’m grateful for their guidance through the worst time of my life. That kind of connection is simply irreplaceable.

This piece was brought to you by PS I Love You. Relationships Now.