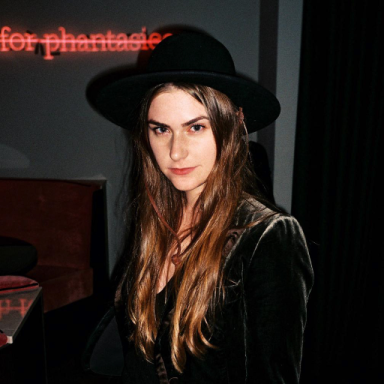 The first boy to end things with me since I can remember, or maybe the first ever—I don’t think my drug dealer boyfriend at 14 broke up with me, but he was surely cheating. I’m sorry if you don’t think we are compatible because I was partying and whizzing through Mykonos with my gay best friend while you were chopping trees in the Swedish countryside and simultaneously dating some basic bitch in Berlin after you asked ME to be exclusive a few weeks prior (a conversation that I would have never brought up knowing that you were newly single, but an ideal you rightly assumed was important to me considering the amount of time we spent together and the amount of times that you entered me).

Since you like to chop trees, you’re right—we probably aren’t compatible. If you were planting trees it would have been a much different story. I would agree that we didn’t have a deeper connection, and that’s why I can’t figure out why I am still hung up on you.

Your photos are great. I’m happy I lent you my first ever film camera that I’ve been too much of a hoarder to sell. I could make a solid 500 GBP not CAD selling that cam, but it means too much to me that I can’t part with it. I’m happy that you have this new hobby. I am less happy that you took my soul with you when you left.

When I ran into you at Soho House, the very same place we ended things five months prior, you sat in the view of me and my friend. I thought that was a bit strange, considering the house was empty. Funny that when she left and I went to the rooftop to smoke a cigarette, an unhealthy pastime we used to share, you followed. I called you out on that rooftop as I did previously via DM—the only way you used to communicate with me.

When you invited me to sit with you and your best friend, who I love dearly, I did. You asked me my opinion on Pisces—a word you couldn’t pronounce. My heart sank. I knew that you were probably asking me about the sign of a girl you were dating. I hadn’t seen you in five months. The AUDACITY. You knew nothing about astrology or analogue before you met me.

I told you my opinion: social, very sexual, and borderline creepy. All of which I experienced from a four-month fling with a guy who fell in love with me, quite unlike yourself.

You’ve made a big effort with me during this pandemic, crawling out of the woodwork, Tree Chopper. Sliding in my DMs left and right, making plans (several meters apart, of course). As you know, we have a similar, if not identical, running route, minus the fact that 6 km is my absolute max to your half marathon.

You casually dropped that you dated three girls since me: a Pisces, a Gemini and I can’t remember the third. My suspicions were correct.

Remember when I was in New York two months after our “parting of ways” conversation (we didn’t get deep enough for a breakup)? A conversation that I wanted to initiate myself, because I didn’t feel the amount of respect or orgasms that I needed from you, but couldn’t dare to because you’re way too hot. You slid in my DMs telling me that I needed to get back to London. “London needs you” was your exact wording. I responded, “You’re freaking me out.” I knew that you messaged me selfishly because you hadn’t yet found what you were looking for.

Sirens as I write in this pandemic.

“You know I’m a nice guy” is what you answered when I told you two or three separate times that you needed to stop DMing me asking me to hangout without making any real plans. No, I know you’re the ultimate fuqboi99.

Lest we forget the time you invited me to our dear friend’s engagement dinner that I was very clearly uninvited to by the host because he wanted to set you up with one of his fiancée’s friends. You didn’t feel like mentioning that I was uninvited because YOU felt too awkward. Imagine how I felt. Off to 1850 m altitude I went—Courchevel, if you’re unfamiliar. Still trying to cope with your fuqshit.

I didn’t love you, but I wanted to.

And yes, I just wrote this because you didn’t join the House Party (app) that I invited you to with four of our mutual friends in the house.

A Girl In Her Feelings While Quarantined

I find joy in dining at restaurants alone biweekly pre-pandemic.