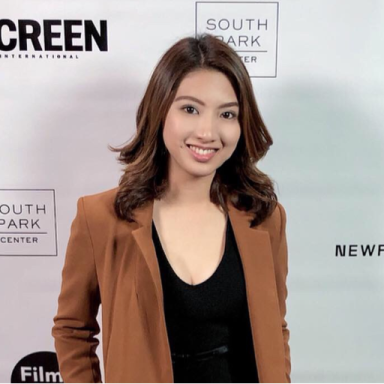 “You’ll never make it. You don’t have what it takes. Why would they give you a chance?”

These were the words that kept playing repeatedly in my head as I sat at my office desk every morning, justifying all the reasons not to quit my corporate job in hopes of pursuing a ludicrous and impossible childhood dream — becoming a writer in Hollywood.

I had my life together at a young age — a stable corporate job straight out of university, the privilege of traveling the world and having the financial freedom to live the lifestyle I have always wanted. I was ahead of the game, and yet I still went to bed with a heavy heart. I was constantly told to count my blessings and be content with all that I had. But the people who incessantly preached these words were the same ones who never left their comfort zone, got stuck in a mundane routine, and ridiculed my ambitions.

I was never one to follow the crowd, and I knew my aspirations in life didn’t have a place in a city with small-minded people and where climbing up the corporate ladder was the be-all and end-all. Instead of succumbing to nothingness and wallowing in despair, I drowned out my fear of criticism and failure, quit my corporate job, invested every cent I had in graduate school, and bought a one-way ticket to Los Angeles.

Like most people who move to Los Angeles, I was hungry, thirsty, and ever so ambitious to finally live my life-long dream of becoming a storyteller in the entertainment capital of the world. As I cruised down the palm-tree lined streets, I was utterly sure that I was meant to be here. Los Angeles wasn’t just a quick holiday stop anymore; it was the place I call home.

Although, I underestimated the fact that finding your place in a country that frowns upon immigrants entails fighting tooth and nail to survive. Being an international student in the US meant working twice as hard, oftentimes to only get half as far as those who have unrestricted right of abode and opportunities. We are given little importance by the government, yet we are the ones who are required to contribute more to educational fees and taxes. Some spend thousands of dollars to start another program after completing one to prolong their stay or bend over backward to fund their own projects to obtain some sort of visa to stay in the country. Others are left with no choice but to leave it to hard work and luck that a company will give them a job and sponsor their visa.

Coming from a place of privilege and stability, juggling three jobs (sometimes doing it at no cost) while fulfilling the demands of graduate school, my own creative projects, and social life was a hard pill to swallow. I couldn’t count how many times I was on the verge of quitting. But Hollywood wasn’t just a dream, it was my life’s purpose. I became a writer, not for the prestige nor the credits, but to serve as an instrument to empower the voiceless and underrepresented by sharing their stories in hopes of sparking meaningful conversations and inducing positive change in society.

I couldn’t forget the first time I became part of a writers’ room where I was the only Asian in the group, and I was told that my script wouldn’t work because the Asian narrative wouldn’t cater to an American or Western audience. Deep inside, I knew that those people were the reason why Hollywood has always had a problem. The week after, the MeToo Movement, Time’s Up Campaign, and the fight for diversity, inclusion, and cultural representation spread like wildfire. Just like that, people of color and their stories became the lifeline of Hollywood. It couldn’t have come at a better time. America is a melting pot of culture, and it’s important to tell everyone’s story as authentic as possible. I had a vocation to fulfill and I wasn’t going to let those who needed my help the most stay further silent, scorned, and oppressed.

So, for the past three years, I seized every opportunity that brought me closer to my goals. Somewhere along the line, my persistence and determination led me to the right people who helped me break into the industry — from securing internships to getting hired to rubbing elbows with industry executives and A-listers, to attending high-profile red carpet Hollywood events, to being recognized by the city of Los Angeles for fostering the next generation of entertainment professionals. I have developed and worked on various short and feature film projects that shed light on social issues that were recognized and praised by remarkable international film festivals. Along the way, I discovered my passion for producing and was shortly given the responsibility of bringing to life a project aimed at giving the differently-abled community a voice and an avenue to tell their stories.

I couldn’t ask for a better life, and it’s safe to say that everything was going according to plan — until COVID-19 happened. In a blink of an eye, life came to an indefinite standstill. Before anyone could catch their breath, the city was put into lockdown, Hollywood instantly shut down, companies transitioned to work-from-home, hiring was put on hold, investors simultaneously backed out of deals, unemployment skyrocketed overnight, we were forced to shut down production, and the government even threatened to deport foreigners during an unprecedented global crisis.

The dream I shed blood, sweat, and tears for rapidly fell apart before my eyes in a heartbeat. I was lost, in denial, and furious. Time was of the essence, and I was running out of it. For the first time in my life, I had nothing to look forward to. This frightening period of uncertainty, isolation, and survival pushed me to build walls and retreat into myself. I wasted away the days and lost confidence and hope in my career and the future. But what kept me afloat and gave me solace during this difficult time were books, art, music, films, and TV. It gave me life and reminded me of my life’s purpose.

If art is the cure, then we have a duty as artists to keep creating and sharing it. Not only do we possess the capability to speak and uphold the truth, but also the gift to restore hope and faith in humanity through the art we create. I turned the pain into power and utilized my voice as a writer to instill courage and a positive mindset especially to the dispirited. Don’t get me wrong, it has been a constant battle trying to cope with the new normal while fighting my own battles and at the same time striving to become a beacon of light. Most days, I just stared at the blank page and struggled to put a simple sentence together. But it’s okay, you need to learn how to work at your own pace and trust the process.

We artists have a crucial role and responsibility to inspire, inform, challenge, and provide a platform to amplify the silent cries to bring about change in society. Of everything that the pandemic has taken away, your voice will remain and prevail.

We obsess over meticulously planning our lives and setting strict deadlines on our goals. But sometimes life throws a curveball that delays our journey or puts us on a different path. To the dreamers and doers, do not let the setbacks and detours discourage you from realizing your dreams and full potential.

Hollywood is a tough industry to break into, but it is not impossible. It will constantly hurt your ego, doubt your competence, and require unwavering dedication, perseverance, and resilience, but it is important that you don’t lose yourself in the process.

It’s only when you keep honing your craft and failing a thousand times over that you will succeed — the world needs your voice more than ever. Keep fighting to be heard and seen. There will always be turbulent times, but you are built to overcome them. Remember that your dream is yours for the taking — don’t let anyone tell you otherwise. Above all, let go of the mentality that living in Los Angeles is the only way to make it in the industry. As cliché as it may sound, anything you put your heart and soul into will speak for itself, and Los Angeles will certainly come and find you.

Empowering the voiceless through the art of storytelling