Ariana Grande is a 23-year-old singer. Two weeks ago, twenty-three people were killed when ISIS launched a terrorist attack at her concert in Manchester, England. Last night, Grande returned to Manchester to stage a benefit concert called One Love Manchester, where proceeds went to the victims of the attack. When another attack occurred in London over the weekend, Grande expressed her support for the people of London then still returned to England for the benefit concert.

During the benefit concert, Grande took to the stage alongside Katy Perry, Miley Cyrus and Justin Bieber, among others.

“I think the kind of love and unity we’re displaying is the medicine that the world really needs right now,” Grande said from the stage.

Ariana Grande showed compassion, empathy and bravery in spades last night when she returned to Manchester to help the community heal. She did not shy away. She did not cower. She did not turn to bigotry out of fear. She turned to music and love and unity.

Donald Trump is a 70-year-old President. In response to the Manchester terrorist attack, he said the United states stands “in absolute solidarity with the people of the United Kingdom” and called the terrorists “evil losers”. After the London attack this weekend, Trump took to Twitter to criticize London’s mayor and note that the terrorists killed people even without the use of guns.

If Trump meant to make a point that gun control isn’t necessary because terrorists and murderers can use other weapons, he failed miserably. Had the terrorists involved in the London attack had guns, it’s safe to assume the carnage would have been much worse. 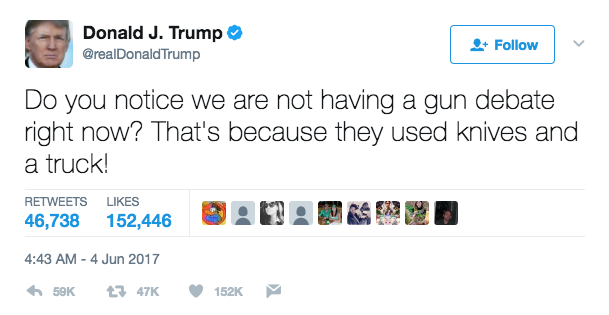 After tweeting about the London attacks, Trump returned to Twitter to double down on his “TRAVEL BAN” (yes, he called it that himself) which has been deemed unconstitutional. Trump is planning on taking the Ban to the Supreme Court. If the TRAVEL BAN were to go into effect, it would ban people from six Muslim-majority countries from entering the U.S. for 90 days. The countries effected by the ban would be Iran, Libya, Somalia, Sudan, Syria and Yemen. Refugees from those countries would not be allowed into the U.S. for 120 days.

Ariana, you are a role model for all of America.

President Trump, you’re supposed to be one.

Did Pete Davidson Delete His Insta Because Of Backlash From Ariana Grande Stans?