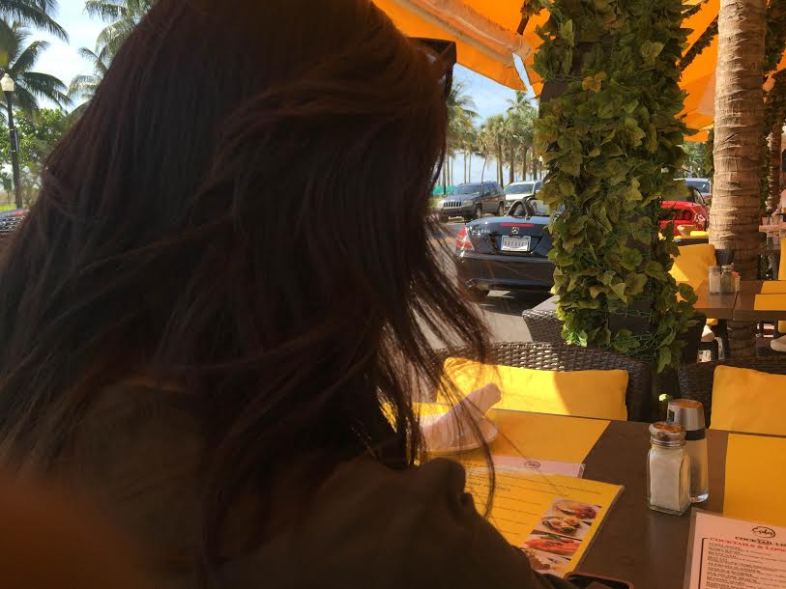 We spent two nights and two mornings together. Our time felt longer, even though it really wasn’t. It never could be. Not in reality, because we didn’t really know one another. You see, we met at my bar on a Monday afternoon in Downtown Miami and for the most part we would end up spending the majority of our time in her hotel bed; her visiting Miami Beach for the week, while I visited every inch of her body. In that moment I know for certain it wasn’t love. It couldn’t be. Love doesn’t happen that fast…the feeling for her sure felt familiar, though. The feeling was grey.

August of 2016 it will make it three years that I made the decision to take bartending on as a full-time career. In the summer of 2013 I made the bold decision to move to New York City to become what I thought at the time was the most important thing in the world: a famous writer. I would become the “Black Kerouac,” I thought. Book signings and poetry readings would be the norm and I would inspire a generation of millennials to pick up print and place eyes to page, and put down the technology for long enough to enjoy my words. Words that would move muscles and organs that only a “Drake-type” beat could muster. Or so I thought… at the time. It never happened.

I, like most Americans who move to the Big Apple, got caught up in the fast-paced life of drinking and drugging on a nightly basis in the city that never sleeps. New York City chewed me up and spit me out, with money down the drain and myself dropping out of a MFA creative writing program. It was around this time that one of my bar mentors and good friends Laura gave me perspective on what it meant to bartend (which I was doing part-time). What it would mean to take this profession seriously as a career choice. She told me it was my responsibility to define the value of grey. Laura sat me down at her bar, the gastropub that is Tavern29, and while I was inebriated beyond belief, I remember the words she wrote down a cocktail napkin on a cold night in December: “YOUR ULTIMATE GOAL – Help define the value of grey! Give enough of yourself for the experience to be as valuable as what each person spends, BUT not so much you feel ‘tired’ at the end!” 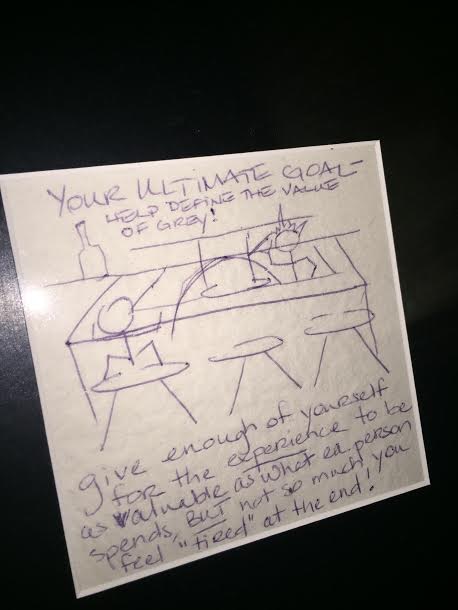 I believe the definition of “grey” is to give an individual as much of yourself as you can without overly extending yourself at the end of the day. And in return you receive just as much value from them with neither one of you feeling something was ‘taken’ at the end of the exchange.

In this moment I can honestly say that I am not tired. I absolutely love what I do, putting in 50-60 hours per week with no weekends or holidays off. I cannot remember what the word “vacation” even means. Bartending has taken me to new heights that I could never imagine…from a part-time affair, which I flirted with, to a full-time role as a bar manager at my current employer, Marion Miami. And in the same breath I think of CJ. I still can remember her faint aroma as she woke up in my arms on two mornings in late April. A beautiful, young soul who travels for a living, whom I don’t think I will ever see again. The fact is we met at my bar on that fateful afternoon and we had sex more than six times in forty-eight hours, with her body belonging to me exclusively…as I ponder grey thoughts of those wee hours that belonged to us.

And I know Prince just passed, and I know Drake’s album just dropped, and so did Beyoncé’s Lemonade, and I’m the bar manager at a very successful restaurant in Miami, and Thought Catalog published my book How to Date a Bartender earlier this year, and honestly all of that matters and doesn’t at the very same time. I still own that cocktail napkin Laura wrote on years ago. I made sure to pocket it when she wasn’t looking, distracted by some other drunk patron that night. It’s framed in my North Miami townhouse today. The word “fortunate” doesn’t even begin to explain how happy I am to have found grey in my life. Like I said, the feeling sure as hell isn’t love…but it feels so close I can’t even taste the difference.