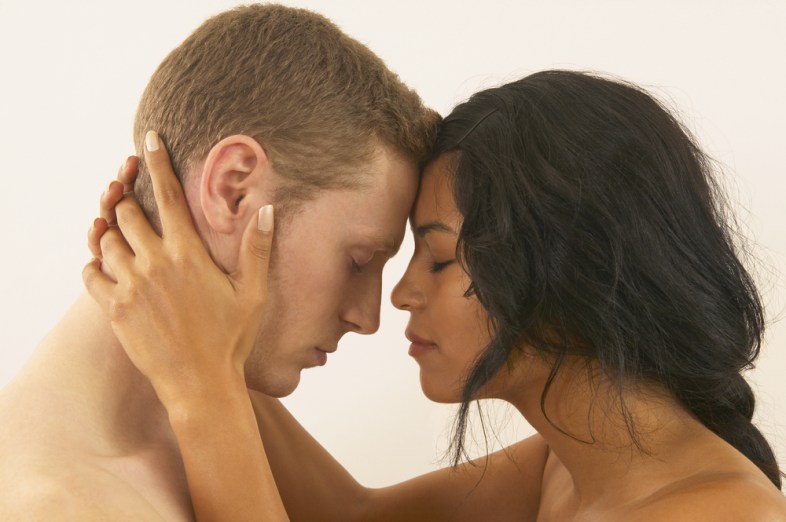 First off, congratulations! You’ve earned the heart of a powerful, proud woman, and that’s pretty amazing.

While more common in today’s diverse world, your interracial relationship is still incredibly rare. Like any relationship, it won’t always be sunshine, rainbows and mid-day BJs, and you’ll deal with your normal share of triumphs, trials and tribulations. But you’ll also be privy to an entirely new host of issues, situations and reactions that arise when dating someone of a different race or ethnic background—some are hilarious, some are sad, most are dumbfounding.

As a mixed-race girl from the South, I’ve been the first woman of color who several white guys have dated—an interesting role to play. I’ve learned a lot from those relationships, as have my ex-boyfriends. Here, we share our totally unsolicited insights and advice.

1. You’re a minority now too

And you may be treated as such. As a white American male, you’re the least likely to marry someone outside of your racial group, according to the 2010 U.S. Census Bureau and resulting analysis from PewResearch Center (PDF).

2. Some people may not “approve” of your new relationship

And they’ll make that abundantly clear to you. Don’t worry; they’re mostly old, uneducated bigots with an affinity for twisting bible verses.

4. Get ready for everyone to talk about mixed babies

Random strangers will encourage you to have sex in hopes that you’ll produce boys like Derek Jeter and girls like Rashida Jones. No matter if you’ve been together for five days or five years, you’ll be inundated with talk of hypothetical and oh-so beautiful mixed babies. Mixed babies > all other babies.

You’ll have more conversations about this subject than you ever thought possible.

6. People will stare at you

No, you don’t have shit on your face. You’re just the face of a rapidly growing demographic in America. You and your beau will elicit a rainbow of reactions—of confusion, concern or admiration—from random passerby.

People will say things like, “Oh! I always knew you liked a little bit of chocolate,” or “So, you like your women like you take your coffee?” It’s going to be weird hearing your girlfriend described in terms of flavors or food.

9. You’re going to be given weird congratulations for going “exotic”

Men (mostly white) will fist-pound you on the street. As an individual, you’ll receive lots of positive reinforcement for dating an “exotic” woman.

10. Race traitor accusations for her, fun!

At the movies, when you kiss your girlfriend before going to get popcorn, an old black woman will whisper into her ear that she is a “disappointment to her race” for choosing a white man over a black man. You’ll console her when similar, shitty moments like this happen again.

11. People will sing to you

At some point, someone will sing the lyrics to “Ebony and Ivory” at you in an elevator—smile through it.

And that you prefer them to white women.

13. You’ll be issued a secret handshake

When you see other interracial couples, you’ll give them a mental high five.

14. Prepare to stand out

You’ll likely be the only black-white couple in your social circle. While on the rise, black-white relationships aren’t as common as other ethnic group pairings—they represented a mere 11.9 percent of total new interracial marriages in 2010.

15. You’re going to get embarrassed

Your friends will embarrass you when they tell a moderately racist joke in front of you girlfriend.

The U.S. civil rights case that legalized interracial marriage is 388 U.S. 1 1967 Loving v. Virginia. Learn it, because people will assume you know it. (Yes, it really was the year 1967.)

Same-race couples may roll their eyes or say, “There’s no way it’s that big of a deal—it’s 2014!” when you talk about the unique challenges that come with interracial relationships. Roll your eyes.

18. Nicknames that suck and some that are clever

As a couple, you’ll be given many nicknames, some more clever than others: Oreo, Cookies & Cream, Tuxedo, Salt & Pepper.

Any veil of naivety will lift. If you weren’t aware before, you’ll understand the tangible role race plays in culture, politics and everyday life, and how it affects your own identity and relationships.

…But who cares because your kids will seriously be soooo cute!

A version of this post originally appeared at Fat Black Bridesmaid.

Keep up with Fabby on fatblackbridesmaid.tumblr.com

If I Was Less Of A Girl, And More Of A Woman