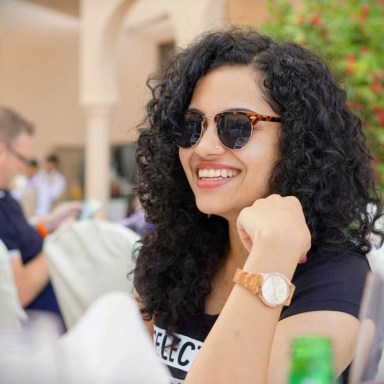 I know what’s running through your mind right now.

“Why would you read your boyfriend’s messages without his permission!? What about trusting your partner?”

Yes, I know it was wrong, and I am ashamed of my behavior to this day. My only answer to you is — because I had a feeling. After months of ignoring that feeling, I had to acknowledge it. And that’s what I did.

You can say having a feeling still does not justify my actions. I agree. But acting on that feeling was the best thing I did.

Trust and privacy have always been an essential thing for me in my relationship. Never check your partner’s phone — it is my golden rule. I wouldn’t be happy if my boyfriend read my messages without my knowledge. So I wouldn’t ever do that to him either. I didn’t have to resort to such behavior because I trusted him, right?

Four years into my relationship, I broke my golden rule.

It was a choice between a gut feeling and my faith in him. I chose my instinct that day.

Our fourth Valentine’s Day together

For our fourth V-Day, we went clubbing along with a few friends of his. Friends I had never met before. I sat at our table, the music blasting in my ear, watching drunk people fall on each other. He leaned in towards me and said he was going to get more drinks. I nodded my head as I continued sipping my whiskey.

As soon as he left, one girl asked, “So what did you get him for Valentine’s day?”

“Um, I got him shoes,” I said. After four years, I had already given him all the gifts I could think of — What do you gift a person who has everything he needs, anyway?

“Oh nice, and what did he get you?” she pressed on.

“He didn’t get me anything,” I said awkwardly. I barely knew this girl, and I wasn’t happy about being asked questions I considered was none of her business.

“What? He didn’t get you anything for your first Valentine’s together? Why would you let him get away with it?” she asked incredulously.

Why would she think this was our first?

“You know his ex, Shirin, has been stalking you after seeing a photo of you both together,” she continued rambling, oblivious to the expression on my face.

“When were they together?” I asked composedly, sipping my drink.

As a habitual over-thinker, my mind went into a frenzy of thoughts in an instant.

What did I just hear?
What ex?
Is he cheating on me?

He came back at that moment, drinks in hand.

“You are such an ass for not getting her anything,” the girl told him, punching his arm.

That night I lay wide awake in bed, my mind rehashing what I heard.

“What are you doing?” my inner voice asked me.

Yes, what am I doing right now!?
Don’t I trust him?
Am I going to trust a random stranger’s words over my partner?

I put my phone aside and fell asleep.

“Who is Shirin?” I asked him nervously the next day. I explained what the girl had told me last night.

He went into explanation mode — she’s an old friend, nothing more. She had a crush on him for a long time. He also went on to say the girl I talked to yesterday was crazy. She always does this. She goes around making up stories and creates problems between people. Shirin is no one, and he is not even friends with her anymore.

After listening to him convincing me, I believed him. Let’s forget about this. He said there’s nothing there.

One tiny seed grows into a massive tree

I believed him, but it was too late already. The seeds of doubt had settled in my mind. Over the next few months, they grew strong, no matter how much I ignored them.

“But she didn’t,” my inner voice replied. “He didn’t tell his friends about you.”

This realization hurt a lot. After four years, his friends didn’t even know I existed?

For months, these thoughts festered in my head.

We met again in May, a day after my birthday. As we roamed through the mall, he asked me to pick something up for myself as a birthday gift. After trying on a few items, we walked out empty-handed.

“You should have picked something,” he said.

“I liked nothing there.”

“Anything would have been fine. I don’t want to search around for a gift,” he said, annoyed.

I am not a fan of gifts at all. Presents are at the bottom of my love language list. And yet, the way he made getting me a birthday gift sound like a chore he had to finish pissed me off.

In the next two days, I noticed he wasn’t paying attention when I spoke. He didn’t want to go out. For a person who threw a tantrum when I preferred to stay in, this was questionable behavior. He refused to accompany me to a salon appointment because he didn’t feel like it. I reminded him I didn’t know the place or the language. He told me to stop being a baby.

I took his phone to book myself a cab when I realized he had changed his password.

“Oh yeah, give it to me.” He took the phone and booked the cab, avoiding my question.

Throughout the day, the alarm bells in my head rang nonstop.

“Was there any point in bringing this up now?” I thought to myself. I had a flight to catch at noon the next day. Did it matter that he suddenly changed his password?

The next day I woke up at 5 for no reason. My boyfriend was sound asleep next to me. I sat up on the bed, searching for the water bottle. As I sat there wide awake in the dark, the notification light on his phone blinked at me.

An overwhelming need to check it filled my mind. I stretched over his sleeping figure, careful not to wake him up. With his phone in my hand, I sat there for a minute, my heart beating wildly.

I looked over at him. Should I do this or not?

This is wrong. I shouldn’t be doing this.
But don’t you want to know if your doubts are true?

I knew all his password combinations, so figuring that out was a piece of cake.

My finger hovered over the green WhatsApp button for a few seconds.

If I pressed it, there was no turning back. I would have done the thing I despised the most. After struggling with my thoughts, I opened WhatsApp. I needed to know.

I scrolled through without opening the chats — nothing stood out. I opened Instagram next. I found nothing there either. A sigh of relief escaped my lips.

Do I tell him I went through his phone or not? The guilt for not trusting him was taking form in my mind when his phone vibrated. A text on FB messenger.

The chat confirmed all my worst fears. Scrolling up, I read a couple of messages before I stopped. There was more intimacy here than I had received from him in the last few months.

Baby, I wish I was kissing you right now.

This one sent last night while I was sleeping right next to him. My world came shattering down.

The message wasn’t from Shirin, as I expected. It was someone I knew he was friends with for three years.

I woke him up right then, shoving the phone at his face in anger. I cried and shouted. I even threw a bottle at him (my aim wasn’t too good). He said nothing, standing in the corner of the room, avoiding my eyes.

With three hours left for my flight, I packed, shoving my clothes haphazardly into my bag.

“Let’s not decide anything right now,” he said, looking at me for the first time.

“There is nothing to discuss. It’s over.”

I got into my cab and left.

I had one rule in my relationship. I ended up breaking it. And in doing so, I saw the person beside me for what he was. Could I have confronted him with my fears earlier? Could I have talked to him when I felt something was off? Yes, I could have. I could have done it all differently, keeping my rule intact. But that day, I listened to my intuition. And it forced me to acknowledge what I refused to see. I am not proud of my behavior, but I do not regret it either. Because breaking my rule set me free.