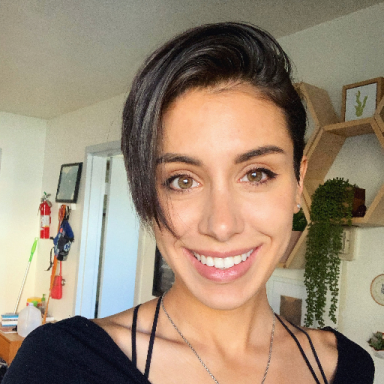 In a private Christian school, you do not get sex ed.

You get a chapel where the speaker holds up a stick of gum and asks, Who wants it?

Everyone does, of course. Gum is an illegal substance and a prized black-market currency.

The speaker chews the gum, spits it into his fingers, and holds it up again, shiny in the gymnasium lights.

Who wants it now?

Ladies, the speaker says, this is your body.

If you give away your virginity before marriage, the speaker says, no good man will ever want you.

It’s not shocking because it’s not the first time you’ve heard such a metaphor. There’s the dog-poop-in-brownies one, there’s the rose-passed-around-until-the-petals-fall-off one. This is your body, you hear, over and over and over again.

By 16, you know that the single most important thing about you is your purity. Most of the men in the world will try and take it from you, but you must be discerning and only give it to your God-ordained husband. By 16, you are consumed with anxiety over this responsibility. You look at every boy with both fear and hope.

You wear a purity ring with pride.

You think you’re better than the girls who don’t.

You plan to wait until your wedding day to have sex because that’s what good girls do.

Until you’re raped your freshman year of college.

You’re a virgin, but you’re also maybe not a virgin anymore.

Does it count if the gum was taken by force? If the brownies were polluted when your back was turned? If the rose was passed around without consent?

You take off the purity ring and it feels like catharsis.

During your first year of college, three of your female friends from high school become pregnant.

Four end up in abusive relationships and don’t want to leave because they are so certain that no other man will want them. They are chewed up and poisoned and ragged-petaled. They have to marry this one or they will have no one at all.

Two are divorced within the year.

One goes to rehab.

Most of them stop going to church.

A decade later, when catching up with half a dozen of them, you discover you all have intimacy issues. One of the women at the table is now a psychologist, but you don’t need her to tell you why.

“God, do you remember those chapels?” she says, eyes distant as she sips her wine.

Everyone at the table nods.

Of course you do.

After dinner, you pass around a tin of mints.

None of you chew gum.

Erica is a professor of English at Western Colorado University

A Glimpse Into The Abstinence-Only Sex Education Classroom, From The People Who Experienced It Firsthand

How To Be Celibate For An Entire Year