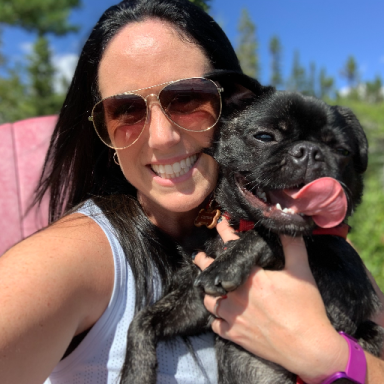 I sat on the wooden ledge in the front window and watched the snow fall under the streetlights. It was a narrow, unstable ledge, but there I sat, as close as possible to the most beautiful snowfall I had ever seen. The kind of storm with the big, fluffy snowflakes that you want to catch on your tongue like a child.

“Let’s go for a walk,” he said behind me. I protested for a minute, as I didn’t have proper winter boots. “It doesn’t matter, the sidewalks don’t look that deep.”

The moment we stepped outside, I realized he was wrong, but I didn’t care. He looked me deep in the eyes, smiled from his soul, and took my hand in his as we walked. Our hands fit perfectly and effortlessly.

That was how it all started years ago, our fingers intertwining as we held hands. Once just friends, he had taken me by the hand as the first sign of showing how much he cared. At the time, I had no idea. Years later, we had been through so much. We had been through good, bad, and extremely ugly, and yet there we were, peaceful under the snowy sky and light of the moon.

For a long time, we walked in silence and enjoyed the moment. The silence wasn’t uncomfortable between us anymore, because in just holding hands, we were able to say a lot.

We strolled to a nearby park and walked the trail along the pond as the snow fell elegantly around us. I stopped for a minute to read a historical plaque when he twirled me around and kissed me. As cheesy as it sounds, it was a moment right out of a movie. Snowflakes on my lashes and the arms of the man I love wrapped around me, I could have stayed there forever. He kissed me for a long time; everything about his kiss and embrace saying how much he needed me.

What he didn’t know at that moment was how much I needed him too.

He had changed me. What I had lost for so many years had been found, and it wasn’t an easy path to this realization either. I had spent so many years chasing connection through ‘the next guy.’ Years of forced conversations, molding into a survival mode, and shutting out emotion because I was scared. I was scared of my emotions, terrified of deep connection, but most of all, I was petrified of abandonment.

But there, in that park, my fear melted. I allowed my emotions to finally flow. My connection to him grew deeper than ever before, and I knew he’d never abandon me as some had done in the past. Because whether or not he was by my side, I knew his love would be felt always.

As we continued on our walk, talking about sweet nothings, I found myself daydreaming. We had talked about marriage and children in the past, but for the first time, I could actually envision it. I finally knew the wife I wanted to be. The warmth and connection of forever. I had finally left behind the days of seeking false love and protection in the bed of the next and felt comfort and security in the familiar.

I snapped back to reality as his hand grasped mine tighter. My feet had gone numb in the deep snow and my hair was wet with snowflakes, but I wouldn’t have changed that moment for the world. “We just fit. It’s so easy. I don’t get it,” he said, shaking his head in disbelief.

I don’t get it, I repeated in my head. “Maybe we’re overthinking it. Maybe there isn’t anything to get. Sometimes, things happen and there’s nothing you can do to explain it.” I let the words roll off my tongue. “All I know is that I love you, you love me, and whatever comes we will face together.”

As we arrived back at the house, we paused again in the fresh snow.

“I love you more,” I responded.

It was then I knew I had learned how to fall, how to open-heartedly fall in love. And while I didn’t know if he’d always be there to catch me, I realized it was worth the risk of giving him my all and I needed to have faith. I wrapped my arms tightly around him and guided him into the warmth of my arms. “I’ll always be here for you.”

Hiker of mountains, & lover of dogs, golf, & singing in the shower.