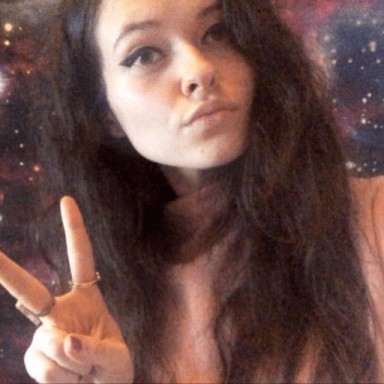 There’s an apocalypse on. The world has been shuffled indoors. Mouths are bound behind masks, hands are dry and sanitized, and supermarket shelves, well, they’re as naked as me on the day I was born. It’s gotten pretty Hunger Games out here. We’re hoarding tinned food, we can’t eat out anymore, and we can barely eat in these days, what with our finances rapidly fleeing from us quicker than we do from anybody who comes within a two-meter radius. We’re panicking. We’re preparing. We’re planning for the uncertain times ahead. We’re rationing our resources just in case this apocalypse becomes a Marvel-owned franchise.

So surely now is not the time to be binge eating? Right? Perhaps. But try telling that to my binge eating disorder. It won’t hear you over the sounds of it’s rampant chomping, though.

In a cruel twist of fate, it was the incessant rationing I chose to initiate at the beginning of lockdown that actually caused my eating disorder. The ‘Pocalypse Paradox, I call it. Mother Nature must have seen how easy it was for me to adapt to this new state of life—I’m indoors pretty much all day every day due to my choice of career path, and for the fact that, honestly, I spend several solid hours lingering by the front door in wait for the postman to deliver my love letter from Robert Pattinson—so clearly she decided to lob a little something extra my way.

I restricted my food hard. I planned out every meal days in advance. I wouldn’t even make eye contact with the cupboards containing my long-life foods because uh, no. What if there’s a second apocalypse, but this time it targets only refrigerators? What if it’s only durable, canned meals that survive? I need to be prepared! And let’s not forget we have vegetables that are dying with each passing moment there in the fridge. They must not, will not go to waste. I essentially lived on boiled cabbage and Dairylea triangles for entire months. But hey, it’s okay, I’ve been a student. That’s still a better deal than surviving off vodka and takeaway containers and sprinklings of shame.

Anyway, as you can imagine if you know how eating disorders work, I quickly developed an eating disorder. As studies seem to suggest, they are almost always a result of restriction. It’s the predominant catalyst, and the longer you restrict, the more your metabolism prepares to kick off. Think explosive teenager having just found out they can’t go to that Harry Styles concert because they didn’t clean their room. So instead, they rebel. They do the exact opposite. They go anyway. Possibly even meet Harry outside the stadium toilets, fall in love, paint their nails matching shades of pink and gold for their wedding in a lavender field. Except, okay, that actually sounds like a pretty good outcome. I, however, have not once found myself frolicking about along a shoreline in the Caribbean, ready to marry a human-sized jar of peanut butter.

I have, however, found myself sprawled out across the sofa wearing nothing but three day old pajamas and seven layers of shame while I use my index finger to scrape out the dregs of that exact jar of peanut butter. A jar that was previously unopened only half an hour prior. It’s not quite as romantic, you know?

But it happened. And it happened a lot. I can’t quite pinpoint the exact moment where I transitioned from such intense restriction to such intense binge eating, but I think it was around my birthday in May (set your reminders for next year, friends), when I’d voluntarily given myself, my body, permission to eat whatever I wanted because hey! Lockdown birthday! What else is there to do to celebrate? And from there and for several months afterwards, I went rabid.

I’d contacted an eating disorder support group, signed up and self-referred, and eventually got the help of a nutritionist and mental health worker. It seemed as though I actually had bulimia to begin with, because all this incessant overeating came with multiple add-ons of guilt. It wasn’t just the added bodily weight I couldn’t bear, but also the weight of the shame, so I tried to account for that with excessive exercise. No purging, nothing like that. And even my exercise wasn’t too extreme; I’d go out for a long hike, lasting no more than a couple of hours each time, but it was daily,.I’m a fast walker and my calorie intake was pretty low then, so it still contributed to my body’s frenzied need to binge.

This was during the summer. It’s autumn now (supposedly, though I’m still convinced it’s March—I can’t wait for Easter Eggs to resurface again). And I am on a self-structured binge eating recovery plan. Taking it day by day, I am finally letting myself look after myself rather than mindlessly succumbing to irrational urges simply because I didn’t realize that I had the strength to not do so. I’ve bought and so far read half of Kathryn Hansen’s Brain Over Binge book (it’s phenomenal, I highly recommend). I’ve listened to podcasts, watched webinars, downloaded guides, and even printed off a checklist to help keep me accountable. Each morning I remind myself, Remember; you are in charge of what you think and of what you feel. And most importantly, of what you do. Anything you do not like you can change—if not tangibly, then you can always alter your mindset towards it. Live as though tomorrow is your last day on Earth. Live as though there are several parallel universe versions of you pining to just take your place. Make them jealous. Make them proud. Eat slow, live fast.

That’s easier said than done, though right? It’s even easier typed. But sometimes getting out of bed isn’t easy, yet we manage that most days, don’t we? We wash our dishes despite our intrinsic desire to just launch them in the bin and buy paper plates instead. We wash ourselves despite our daily temptation to just embrace the ways of our cavemen ancestors. We pursue love interests and then, later, we break up with them. We emigrate. We exercise. We empower others. We apply for jobs, we attend dental appointments, we fill out long-winded forms about money and housing and some other stuff we should really look into but never quite do—and we do all of this often. They’re not necessarily easy feats, but we do them, and we do them well.

And even when we don’t, even when we mess up, it’s okay. It’s great, actually, because it means we at least tried. That’s so much better than never trying at all. We only ever fail if we quit or if we never start at all. So here I am, trying. I know I can do it, I know I will do it, I know I am doing it—in and amongst any challenges that might arise along the way. Because I’m human. Persevering, tackling mountains, sailing into the storm, it’s what we do. Just look back through the history of humanity’s existence (try to skirt around some of the sketchy stuff) and you’ll see. It’s all there, printed in black and white and goldust.

I’m going to recover from my binge eating disorder. And I’m going to do it the same way I brushed my hair this morning. It might hurt, but it’s got to be done, or else this unruly mess will take over my life. So instead, I tame it. I take control. Then I get out there, head high, and I feel the wind flowing through it. A sunrise up above.

I am a story-yeller: like a storyteller, but lacking volume control