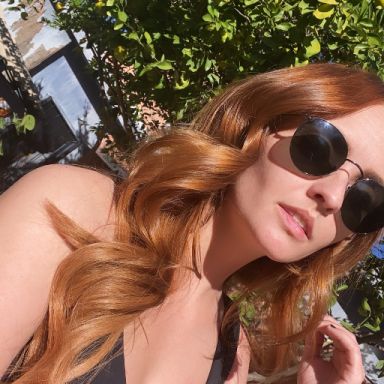 Beth could not remember a time she had enjoyed a trip to the beach. Though she grew up in a small oceanside town, she avoided trips to the sandy shores with her friends and family. The seagulls drove her insane, pestering and pecking at snacks left unattended. The water was never enjoyable. And the sand. The fucking sand. She hated the feel of it between her toes, she hated how it stuck to everything, she hated how hard it was to walk through it. Even after three showers, she still felt it, clinging to her hair and skin, gritty and itchy and miserable.

She remembered all the reasons she hated the beach and added another to the list as she tramped across the shore in the early hours of the morning. Her boyfriend had decided to dump her in front of half her high school class at a bonfire party. She intended to snitch on the underage drinking as soon as she was up the bluff side and in cell range. She was freezing, the cool June breeze bringing in even cooler air off the surface of the water. As she stalked towards the uneven pathway, she fumed.

He had dumped her. Her! It was unbelievable. He had left her in front of the entire school because she “was complaining too much.” It wasn’t her fault the beach was fucking miserable. The fire was too hot, and it had made her beer warm. That wasn’t her fault either. She was livid. Humiliated. Could not wait to get her revenge.

The light of the bonfire was disappearing behind her. Each step sent plumes of sand flying up behind her. She did not notice the wind had stopped or that clouds were now rolling in and blocking the light of the moon. It took her another twenty yards to catch the encroaching blackness, and another ten to realize that the air had turned stagnant and warm without the breeze blowing in.

Of course, she thought very little of the change, and this was perhaps her fatal mistake. Had she thought about how strange it was that clouds were rolling in despite the lack of wind and how odd the night now felt, she may have made a run for it. Of course, she was much too angry to think about anything other than herself. She reached the base of the bluff and scowled at the climb she would have to make. It was not a steep path, but it roped and zigzagged up the cliff, and the loose sand made it all the more strenuous.

She began her climb and then abruptly stopped. She felt something watching her. The back of her neck prickled, and chills ran down her spine. She started walking again, quickening her pace and ignoring her nervousness.

“Ben, if that’s you, fuck off and leave me alone!” She shouted, but her voice wavered.

Something was very, very wrong.

She was approaching the first curve of the path. A small set of stairs wrapped around the bend, and she took them two at a time, but as she carried herself around the corner, she dared a look down towards the cove. The glance cost her, and she lost her footing. She took in a raspy breath, ready to scream but unable to make the noise. She caught herself on the side rail and began to laugh at herself.

“You are ridiculous. You’re only spooked because it’s late and you’re drunk. Look down at the beach. You’ll see. No one is there.” Yet Beth found herself struggling to look down. She sat down on the step, still half laughing, half panicking, and wiped the tears from her eyes. Beth closed her eyes and gripped the handrail, letting the sound of waves crashing relax her. She pulled herself up into a standing position and faced the beach. She opened her eyes.

“Fuck you, Ben! Quit messing around with me and face me like a man, you asshole!” She screamed down the pathway.

The bluff base was twenty yards away, and she began to trek back down, ready to argue. The figure stood, unmoved. She quickened her pace, ready to blow her head off at Ben, and wanting to make sure he heard every word she flung at him. By this point, the clouds were blocking most of the moon’s light, but she could make out the silhouette of him. Had she been in a more stable frame of mind, she might have noticed how large the shape of him was.

She was five yards away when she registered the smell. The salty tang of the sea was much too strong. The rotting seaweed smell stung her nose. She looked up, unable to stop her feet moving forward as her velocity carried her down the sloping path. The breath was stolen from her throat, and she choked on a gasp.

“Ben?” Beth croaked out the word, her mouth dry. The thing before her shook its head, once to the left, once to the right. Her voice went down to a whisper. Her bowels loosened.

“Please?” Again, it shook its massive head. She scrabbled for the rail, attempting to run backward and turn around at the same time. The loose sand betrayed her, and she lost her footing, falling back on her elbows. She began pushing herself up the slope, her elbows digging into the rough sand, cutting open her elbows. The thing stared down at her, and she could see its shoulders moving up and down. It was laughing at her.

The silhouette stopped laughing and reached a massive hand towards her scrabbling ankles and grabbed them both. It began to drag her back towards the crashing waves it had crawled out of. She dug her fingers into the side rail, trying her hardest to pull herself back, and losing 3 fingernails as it violently yanked her away. She continued her efforts, grabbing at the loose sand, looking for anything to defend herself, to hold on to, to get free from its powerful grasp.

“Ben! Please! Mom! Dad! Daddy, please, please come help me!” She choked out for help in gasping sobs, willing someone to hear her, wishing she could hold her mother, hoping beyond all this was just a horrible dream. It wasn’t.

She was unhinged now – she could see the light of the fire just a half-mile down the beach, her salvation within reach. But the waves were too loud. Beth flipped over onto her stomach, grabbing for something to hold. This resulted in her swallowing a mouthful of seafoam and sand. Panic began to set it. She gagged on the salty water. Her sobs became weak and garbled. Seawater washed over her head, and she felt the current twisting her body, this nightmare of salt and ice becoming more real in that this was the moment she was supposed to wake up, and she wasn’t.

The thing picked her up, carrying her the rest of the way into the black waves. Her mind had gone blank, protecting itself from the sheer terror she was feeling, but soon she was brought back into her hell. Something was biting into her side. Her brain was trying to remember what was going on, and she looked up towards the pain. A face was buried into her side, and a chunk of flesh was ripped from her side. She released one final, belting scream, and then another wave crashed over them.

Beth drowned 56 seconds later, with half of her stomach missing, and the rest to be eaten shortly.

Rather be foolish than fooled