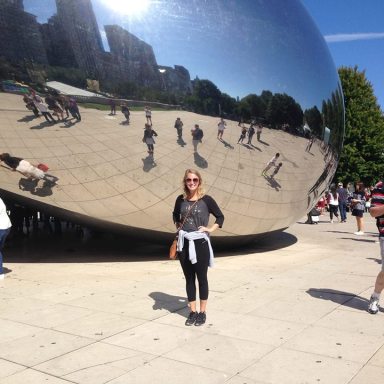 1. No one told me that my mom and I would reverse roles in the face of cancer.

My mom was always my protector. She was the woman who could make almost any problem go away. However, in the face of cancer she become more vulnerable than I ever thought possible. One distinct memory creeps into my mind when thinking of this. While walking into an oncologist appointment, my mom pointed out a fish tank in the office lobby and asked me if we could go see it. She couldn’t get around on her own so I had to maneuver her wheelchair into a tight space to see the fish. Irritated at the nonsense of the situation, I groaned as the wheelchair wouldn’t budge to get to the tank. I was worried about how stupid we looked trying to get to this tiny fish tank in the back of the office. I was worried we would be out of earshot of the nurse calling us to go back. I was worried about the news the doctor would give us and aggravated because this was such a silly thing to do. In the midst of my agitation, I will never forget the way she looked up at me. My sweet mother realized I was getting upset and apologized, looking so small and as though she felt stupid for asking such a thing. In that moment, I couldn’t help but see her resemblance to a child. I was so angry with myself that I took a small moment from my mom in which she just wanted to enjoy something pretty and simple in life. She probably only wanted to get her mind off the situation at hand and I denied her this. The shame I felt with myself was nothing compared to the fury I had with cancer for evoking such pain and fear into my strong-willed, spunky mother.

2. No one told me that death is different from how it was portrayed in television.

In every movie I’ve seen where someone is close to the end of life with cancer, they begin to become weak and conveniently die during the middle of a sweet conversation. If you have had someone close to you pass away from an untreatable disease, you know that this isn’t the correct betrayal. My mom was asleep almost constantly for 4 days before she died. It was a long process in which I would stay by her side, waiting for her to wake up and talk to me. I was disappointed because I didn’t have one of those “movie moment conversations” where she would tell me how much she loved me and give me profound wisdom for my life. Death is not the same for everyone and the person dying could be heavily medicated or unable to communicate. I had never discussed what the end of life was like and I had no idea what to expect during her final days as a result.

3. No one told me how strong I could be.

I don’t think of myself as weak, but I am known to cry at how cute a dog is after couple glasses of wine. I get extremely cranky when I have less than 7 hours of sleep and I still choose to let spiders loose outside instead of killing them. So when I think about how I took care of my mom for 6 months when she was sick, I can’t fathom where this strength came from. I slept on couches in hospitals for weeks on end. I argued with doctors and nurses trying to get her the best care possible. I woke up every 3 hours throughout the night to give my mom her pain medication. I didn’t cry in fear of scaring her the morning her doctor came in to tell us that her cancer had spread so unbelievably that she had barely weeks to live. This was undeniably the hardest time of my life, but I never wavered trying to take care of her.

4. Everyone told me I would be okay someday, and I did not believe them.

During the wake of my mom’s death, I was told that I would remember her while she was happy and healthy and not picture her ill. I never thought my memories of her before cancer would take place of those of her in hospital beds. Yet every year on May 5th, I can almost hear her sing-song voice asking “where are we going today my sunshine?”. We never skipped our long standing hooky tradition on my birthday. Whenever I hold my nephews I am reminded of how she would rock me as a child and sing. Every day I am reminded of her love. Whether I’m braiding my hair like she used to do or a Bob Seger song comes on the radio while I’m driving, I’m reminded of that lively, beautiful mother of mine and I can’t help but smile.