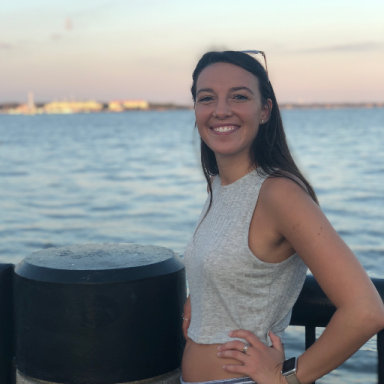 As I begin, I’m well aware running isn’t for everyone. I know cardio exercise is some people’s idea of a fiery hell, and I know there are many other resources out there that can ease the grips of depression. However, if there is just one soul who reads this and finds it to be helpful, then it is worth being written.

I began running outside of sports during high school because of the typical pressure on a teenager to be an acceptable jean size and fit in. By this time in my life I had come to the harsh realization that my father’s apparently hereditary struggle with mental health had manifested itself in me. (Why couldn’t I have inherited his 20/20 vision?!)  Being 17 meant having hormones make my adolescent mind and body go crazy enough, but to add depression on top of this just seemed unfair.

Everything hurt way more than it should’ve. There were arguments with my boyfriend, less-than-perfect grades. I found it hard to motivate myself to do anything. Getting into the shower took effort. Grabbing my towel after turning off the water took effort. Stepping out of the shower took more effort. I spent an unreasonable amount of time staring up at the ceiling with no interest in doing anything else. My poor mother, not knowing what else to do, told me to get outside and go for a run. “Get some sunshine on your face,” she said.

I’ve heard before that having a routined lifestyle can help those suffering from depression. So maybe it was the pattern of putting in my headphones, lacing my shoes, doing a couple stretches in my driveway, and running the same route through the neighborhoods that kept my sad and hopeless thoughts at bay. Maybe it was the vitamin D, like my mom said, or the endorphins (to quote Elle Woods, “exercise gives you endorphins, endorphins make you happy”). Most likely a mix of all these things helped relieve the pain I carried. Don’t get me wrong, those thoughts still creep back into my brain from time to time. As a person with depression knows, one can never really keep them away forever.

Now, in my mid-20s, I run the same route almost every day, through a different neighborhood now, and it calms me. I even finished my first marathon a couple months ago (I’ve got the dead toenails to prove it). I have developed a very intimate relationship with running, and I don’t plan on parting with it anytime soon. I can only hope it does the same trick for you!

I can definitely lick my elbow