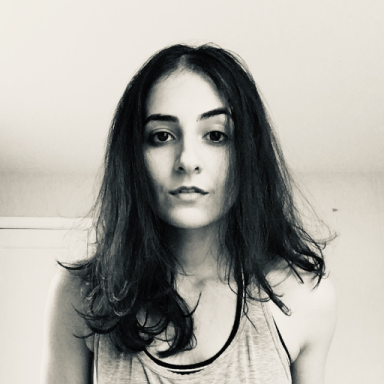 There is something oddly comforting about sleeping next to a stranger. It is perhaps because his body isn’t really yours, but open to be explored, touched, kissed, caressed. You trust him in that moment. You are sleeping next to him, sharing a space, a smell, a hunger for something deep, a connection that gives you a break from loneliness. The space isn’t significant—a bedroom, a hotel room, a couch in the living room. And the words exchanged aren’t much, but soft affirmations of what feels good, and what doesn’t, of what you want, and what he wants. It’s an exchange of whispers in the light, in the dark, under a blanket or above. Sometimes you don’t hear each other anymore, but you listen with your body, and the silence is comforting.

His arm is wrapped around my neck, heavy, but comforting. He is my stranger—I wake up to his smell, the leftover cologne that melds into my hair and skin. I then feel the vibration from the M train moving on the Williamsburg bridge across the street, and the rattling reminds me that I must get up. I imagine him making me coffee, but I am not here to stay. My reality is made up of moving objects, of limited time signifiers, of errands and schedules and responsibilities. I untangle myself from my stranger’s arm, and he inadvertently pulls me back into his chest. I push myself forward. I am free. This time, my stranger turns his body away from me—the connection is over.

My feet touch the cold, uncarpeted floor lightly as I make my way out to the dark hallway, past the closed door of other strangers, and out the front door. Outside, everyone is moving, the mother with the stroller, the man arranging fruits outside his shop, the boy with the bike, the girl running for the train. Everyone is moving. But I would like to be still, to think about these moments with strangers and why they are comforting and hurtful at the same time. Hurtful in that they inevitably end in their transience. Hurtful in that you can’t have expectations or feelings of need. Hurtful in that you face the world alone once you leave your stranger’s bed. You can’t expect to be remembered, or wanted. You can’t expect to be defined, even if you ponder, just for a moment, the idea of being not strangers.

I walk toward the staircase that leads to the train, and my stranger’s face slowly disappears from my subconscious.

I remember what I wore to my grandmother's funeral at age five.