Skip to content
Report This Article
What is the issue?
I know, I know – raise your hand if you’ve seen the ubiquitous posts with the trenches and the black pants and the black stilettos and the white button downs and when did we forget that fashion is supposed to be fun?! There’s a reason why all of the tried-and-true pieces magazines always feature as the staples you should invest in, but sometimes it’s fun to break the mold just a little and put your own twist on an old classic — without breaking the bank.

Because you can’t wear yoga pants to the office. We’re going to get this one out of the way first because A) there is no reason to pretend that I am anything but a slob in very nice knitwear, and B) because I bought these exact sweats on Saturday and have since had to talk myself out of never taking them off and letting them fuse to my body and burying my corpse with them when I die. They are that comfortable. And look, whether you’re running to the bodega on a weekend morning, or dressing them up with boots and a button-down (as I did today), these babies deliver. They’re kind of ubiquitous, and I’ve seen so many girls in the past months with this exact pair so feel free to find a similar style if you hate having something everyone else owns, but I once saw a girl dress these up with a pair of wild cage stiletto boot things that probably cost more than my rent, and I have had fever dreams about the combo ever since.

Because Cher’s was the last really memorable black dress. Yes, we all know about the LBD. Countless thousands upon millions of words have been written about the LBD, and chances are good you have at least one (if not more) in your closet already. But not everyone has a LWD, whether that’s because if you’re not careful, it can scream a little ‘bridal’ or just because it’s very hard to keep clean. Life-hack: I sprayed mine in Scotchguard once, and it is now the most grime-repellant piece of clothing I own, if a little stiff. (Hey, that’s the price you pay when you want to wear white but also like to eat drippy, saucy food.) A nice little bonus is that it’s holiday time, where I can guarantee you that people will be running around in LBDs (and maybe LRDs if they’re bold), but few will go the winter white route. And why not? It’s classic! Be a freaking snowflake. Let it go, man. Let. it. go. (Elsa’s dress was blue in Frozen, but let’s go along with it here. Channel your inner Olaf or something.) Also, this dress comes with a high neck if simultaneous cleavage and leggage ain’t your thing.

3. A bright lipstick to beat the dreariness of winter. (Shown, Nars Audacious Lipstick in ‘Lana,’ $32.00) 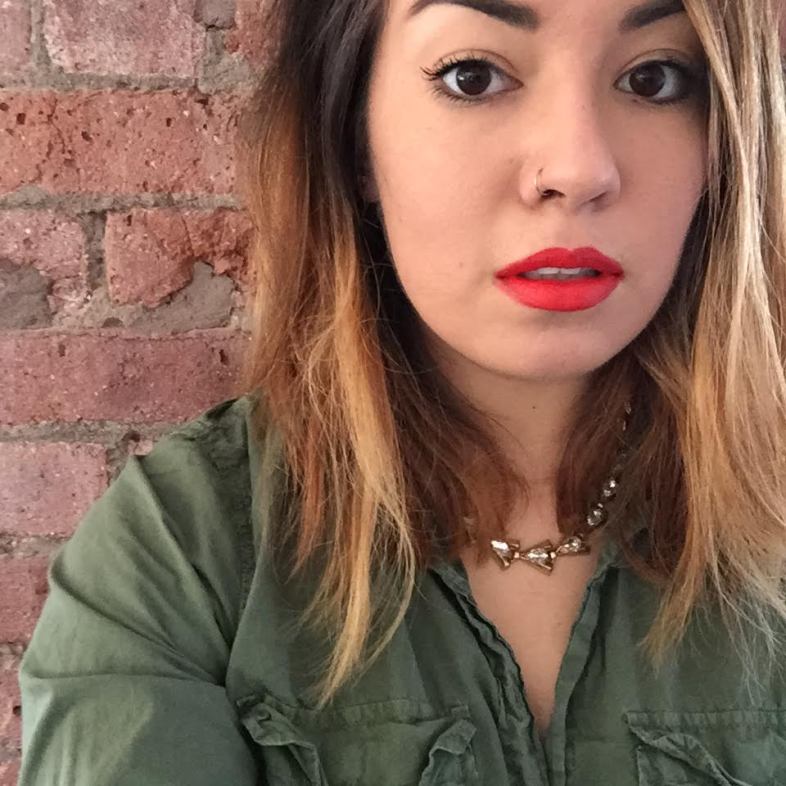 Because Taylor’s maxxed out the red lip for us all. Winter is dull. Winter involves a lot of black, gray, and navy — all of which are colors I love, but the somber palette can get kind of cumbersome. How to punch your wardrobe back up under all of those layers and coats and scarves? Lipstick. Specifically, this lipstick from Nars, which is a little pricey for lipstick, I know, but the stuff goes on fa-law-lessly and does not budge. I really love the orange-red of ‘Lana,’ because it’s like a hyper-punched up (and much-needed) update for the classic red lip. Every girl has a red lipstick. Not every girl has a flamin’ hot Cheeto mouth. But you should! You want a flamin’ hot Cheeto mouth. Trust me on this. It looks good on literally every skin color. (And if you really, really don’t, it comes in 39!!! other colors for you to fall in love with.)

Because your boyfriend wants his white dress shirt back now. The inverse of the LBD/LWD concept, the black button-down is the white button-down’s updated sister. Where the white button-down is crisp, the black one tends to be silky (or else it gives off waiter-y vibes). You can roll up the sleeves, tuck it in, wear it with skirts or pants or shorts or your fancy new sweatpants — it’s really versatile. (Plus, if you pair it with black bottoms and a good pair of heels, you can go from work to drinks to holiday parties if need be. Just throw on some sparkly jewelry and a hot lip and call it a life.) The button-down version shown is classic, but the popover blouse is A+ for girls with bigger chests (no gaps between buttons!). You’re welcome, either way.

Because ain’t nobody got time for laces, or heels, or both. “Got my Vans on, but they look like sneakers” has always been a song lyric that’s troubled me because aren’t Vans already sneakers? Regardless, Vans slip-ons are classic. I know they’re going through a resurgence and you probably own a pair already, so it’s not exactly novel that I include them, but the diehard grungy California kid in me needs you to know: you. need. these. I’ve paired mine with sweats, jeans, dresses, skirts, dress pants (for a particularly high-low look), on the way to spin class, to the bodega when it’s early and I don’t want to deal with laces — in short, ev.ery.where. I never really got into the black Nike thing street style bloggers were really into, because that screamed a little norm-core, but these are clean, and kind of like Keds for grown-ups. (Full disclosure that I did eventually upgrade myself to a leather pair because the canvas gets trashed if you live hard and don’t Scotchguard that shit, but you live, you learn.)

Because it’s more fun to show off (and gets less holes) than a black lace bra. There is a great list first published in Glamour in 1997 that says every woman should own “a set of screwdrivers, a cordless drill, and a black lace bra.” (Whether you wear the black lace bra while using said cordless to get those screwdrivers into your wall is up to you.) But because 1997 was almost 20 years ago, this is its modern-day equivalent. The point of these straps is to be seen — my love for the American Apparel racerback tank knows no bounds — though if that reads a little too glam-trash for you, then by all means, cover it up. The extra straps serve little to no function, and yes, this is still a black bra, but it’d be fun to think extra strappage on top of your girls keeps them in place. Also, full disclosure that Selena Gomez wears a similar bra under a mesh top in her latest music video, and because I am a sucker for begrudgingly loving any and all things post-Disney pop, this baby is going on my wishlist.

Because smelling like you put on deodorant is important, but so is smelling like someone people remember. It seems like fewer and fewer women wear perfume these days (though based on evidence collected from my subway rides, guys are plenty happy to douse themselves in enough cologne for us all) unless there’s a special occasion or something. Enter the rollerball, however: a convenient little travel size of your favorite perfume so you can spritz a little bit and not smell like a flowerhouse exploded on you. I really love Elizabeth and James’ new scent, Nirvana, in Black, which is a really rich mix of sandalwood and vanilla. It’s not a scent for girly-girls, and is like a less potent version of Kiehl’s OG scent, musk. Plus, there is a great Coco Chanel quote that goes, “A woman who doesn’t wear perfume has no future,” and who are we peons to mess with the likes of Madame No. 5 herself?

Because that black one’s starting to get pretty boring. I firmly believe that every woman should have a power blazer in her closet, and even better if you can invest in a solid one that will see you through interviews and important meetings and dinners where you have to look somewhat put together and capital-A Adult. This, however, should be a piece in a color that is just plain fun and just for you. Throw it on over jeans and a t-shirt, and instantly elevate even the most boring of errands. And because it’s just for fun, you don’t have to go to all the trouble of getting it tailored or making sure it will match every article of clothing in your closet.

Because that spangly mini-skirt’s cute, but you don’t want to flash everyone at the office party. I am a shorts person. I am a jorts disciple. If I could run around all day in shorts, I would. Sadly, I moved (of my own volition, no less) from the shorts capital of the world to a place with a thing called seasons, and as such, that kind of puts a damper on my leg-baring ways. The trick to wearing shorts year-round, however, beyond maybe doubling up on tights, is to wear a pair that are made of a thick enough fabric that you don’t look like a complete loon in the dead of January. Brocade is usually a solid choice, as are any sequined, beaded, or otherwise tricked-out fabrics. Because hey, if you can’t wear shiny colors on your butt at Christmastime, when can you?!

Because sweater weather is a lifestyle, and a girl’s gotta have options. Will this sweater keep you particularly warm (which, to the best of my knowledge, is the point of said sweater)? No, not particularly. Will you look downright Alicia Silverstone circa Clueless? Yes, definitely. (Does this mean you like Billie Holiday, too? Do you love him?) Here’s the thing though about cropped sweaters that nobody ever tells you about: you can layer them over dresses, and it suddenly turns the dress into a skirt. …Okay, maybe people don’t need to tell you that because it’s so common-sense, but hang with me here. It works well with high-waisted stuff, too (hint: like those shorts), and you can layer the black button-down under it, and pair it with the sweats when you’re just lounging around the apartment and have the heater going full blast, and we have officially come full circle. Look at you making your whole wardrobe work together. Way to go, you.

19 Things Every Post-Collegiate Runner Takes Away From Their Cross Country Career
Read this: I Accidentally Fell Asleep In The Middle Of Texting A “Nice Guy” From Tinder, This Is What I Woke Up To
Read this: 19 Things You Need To Know Before You Date A Sarcastic Girl
featured image – NAME
Beauty Clothes Fashion Forever 21 H&M nars NastyGal Style Women's Fashion Womens Style