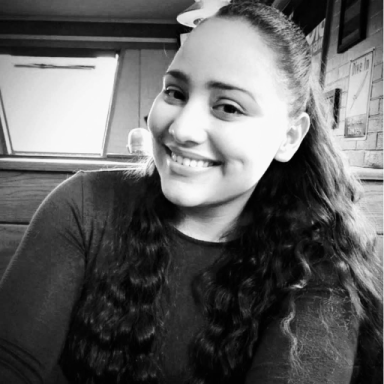 Let me tell you a story.

Growing up, I remember strolling through the makeup aisle in dimly lit convenient stores. Everything on display was so curious to me, the little brushes and powders and pens that made a person both the creator and creation. But one specific product always made me pause: the eyeshadows. I never wanted them, but I found them interesting—I was intrigued by the idea of adding color around your eyes like a painter does to a canvas. And staring at the purple eyeshadow, my chest swelled with adolescent pride, because I naturally had that color around my eyes. I was born with it. I called it “hereditary makeup.” And for a moment, I felt pretty.

And then I saw the eye creams. Particularly, the dark circle corrector. Corrector.

I flinched. This was the first time I began to question my appearance. Why was something that was such a natural part of my body, something I never really noticed as a bad thing beforehand, suddenly in need of correcting and covering? Did people really think the delicate skin by my eyes was hideous?

And thus began my journey of attempting to hide my God-given face. If I didn’t have the time to put on an inch of makeup underneath my eyes, I wore glasses to try and bring attention away from the midnight under my already-obsidian eyes. Anything to keep my face from being too dark for others.

One time, I stared at my circles in the mirror with contempt for God knows how long because some boy (who I didn’t even like) said dark circles were gross. He was talking about James Dean backstage during a musical practice. “Ew,” he had said. “The dark circles make him ugly.” Another time, I woke up and looked in the mirror and for some reason didn’t hate the circles that morning. I decided to go to school without makeup, only to run to the bathroom and pull out my emergency kit when a teacher said I looked tired and one of the prettiest girls in school asked if I was feeling sick; I guess I looked sick and tired that day. Ironic, because after their seemingly harmless comments, I felt sick and tired.

I started to wonder what else people didn’t like about my face. Were my beauty marks not all that beautiful after all? Did the small freckle under my right eye bother anyone? If people got close enough to notice the small chip in my tooth, did they grimace?

It reached the point where no part of me wasn’t up for criticism—even the parts I once loved.

Finally, I exhausted myself. I asked myself if I would ever say the things I said about myself to another person. The answer was immediate: Absolutely not. So, why did I feel so free to hate myself? I deserved better.

Determined to eradicate this plague of self-loathing, I compiled a list of all the things I hated about myself. The first thing I wrote down: dark circles. That’s where it all started.

But that’s where it will also end.

I’ve decided to view these circles as moons under my eyes. As mystery smudged around the windows to my soul. And dare I say it? As hereditary makeup.

So, to anyone who balks at their imperfections—the one eyebrow that’s higher than the other, the mole right under their loosely defined jawline, the scar on their forehead from stitches in a childhood accident that didn’t heal properly—know that imperfection is exquisite. Still, you can be the detective and the mystery, the magician and the magic, and the artist and the art, just by being you.

Why Do We Always “Need” To Wear Makeup? An Analysis Of My Naked Face

How I Discovered Self-Confidence Without All That Makeup

An Ode (And Guide) To “Trashy” Beauty

This Is The Last Thing I Will Write About You