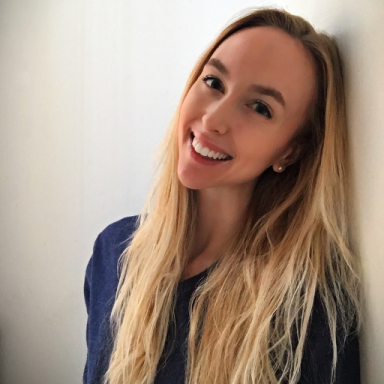 “You have more dignity than this.”

I heard a voice inside my head, not unlike my own, softly whisper as he grazed my shoulder with his fingertips as if touching porcelain bound to break any second.

The simple, almost unfelt, brush of his fingertips instantly sent a force through my body more powerful than seemed possible for such an effortless movement. I shivered as it coursed rapidly through my body, manifesting itself in waves of heat and breathlessness.

I caught his gaze for what must have been a second, although the way the time lingered made it impossible to know exactly how long. The pure immediacy of the moment hung so thick in the air, I could reach out to touch it.

I couldn’t remember ever being so fully present. Never in my life had I focused so much on the happenings of right now, without looking forward or behind ever so slightly, even in the back of my mind. I didn’t feel the loss of dignity I expected – the one my mind loved to continuously point out to me, almost mockingly. All I felt was freedom. Liberation from the chains of the past and the haunting guilt of the future.

A sense of empowerment rushed over me like the feeling of nervously diving into an ocean wave, unsure of what to expect, and suddenly finding yourself breaking through the surface, victorious. The ocean is vast, but your world is small; and in the scope of your world, you have just conquered the ocean. Nevermind those waves in the distance.

I didn’t want to look forward or behind. I wanted to be right here: present. And presently, I wanted this. I wanted him. I wanted right now, every second of it. Honestly, all I wanted was to be strong. And in this moment, while the choice was all mine, I was.

With that at the forefront of my mind, I dove in. Ignoring the pestering voice in my head that sounded too like myself, I chose right now. If only for the idea of conquering everything behind me and everything that lied ahead, and fighting to the surface of it all in victory.

I don’t recall when we started meeting like this. A couple of weekends every month to start. Who knows why. Maybe out of boredom or loneliness or regret for the way things had slowly unraveled in both of our lives. Maybe we did it to escape the past or to postpone the future. Maybe we did it to forget ourselves and enter into a world where none of that mattered.

We had been friends for years. At some point, my feelings changed. It’s funny how hours, days, and months pass slowly, almost mechanically, and nothing is different until one day you look back and nothing is the same. I should have called it quits the moment I knew I wanted more, or maybe long before. At the very least, I should have told him I was falling in love with him. But the crushing weight of knowing he would never feel the same kept me biting my tongue.

Now, here we were in my room again with me pushing my thoughts aside to accommodate the feeling of having him close for just one more night.

The moonlight bounced off of passing cars and shone through the window bit by bit, dancing around on the ceiling like thousands of stars. It fit the setting perfectly, depicting through small rays of light an entire world going on around us – not drawing us in, but instead closing us further inside a world of our own. A world of cool, crisp sheets floating through bare legs like a breeze, pillows tossed aside – punishment for being in the way – and passion, whether for each other or the adrenaline inside a moment seized, I couldn’t tell or even care.

Enveloped in passion that cradled me like the clouds overhead, I drifted to sleep. I awoke only feeling sorry for myself; the reality of our story never so beautifully strung together as it was that night.

The truth, once blazingly loud, would slowly disappear with the rising sun; another piece lost with each ray poking its head shyly through my window until it disappeared fully behind the sun high in the sky and my pretending to feel nothing at all.

Elizabeth Blosfield is a journalist and creative writer based in NYC.

I Hope You Find The Courage To Let Me Love You

Time Isn’t The Only Thing That Will Heal You

If You Want To Love Me, Love Me As I Am