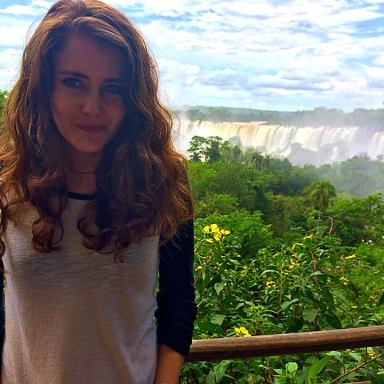 When I sat down to write this essay I had this funny image in my head: I am standing at a podium in a nondescript school auditorium facing three rows of blurred faces seated in folding chairs. All very Alcoholics Anonymous-esque.

I am almost monotone in my description of my incurable genetic illness. It’s come to the point now where I’m almost sick of talking about Crohn’s Disease. This clingy, needy, temper tantrum-ridden gollum has attached itself to my body for over half of my life now and I’m a little sick of it. But I have to talk about it. Crohn’s Disease is something I deal with continuously and it’s clawed its way into all aspects of my life.

From the basics: my saying no to those delicious-looking chili cheese fries (“Your recipe has beans? Can’t. Thanks anyways!”). To the routine: scheduling treatments, doctor’s appointments, and prescription refills like an octogenarian. Only you’re 25 and have no idea how health insurance actually works. To the embarrassing: Going home sick from work because you can’t stop feeling nauseous (for no known reason) and you don’t want to throw up in front a client (this almost happened…twice).

Now add Crohn’s to dealing with insurance companies, job decisions, traveling plans, relationships, etc. Oh and add two other diseases, because these auto-immune illnesses tend to be systemic. See? It goes on and on. You’d get sick of talking about it too. But I have had this illness now for over half my life, it is second nature and has influenced too much of me.

One of the reasons I’m sick of talking about my illness is because it’s really important to me not to complain about too much about myself. Everybody’s got something. So by all means complain a little. But no one person can claim all the world’s suffering and there are a hell of a lot of people who have things worse off than me. I try to save my breath for more interesting conversations than my illnesses.

But I also like to think that I’m that getting sick of talking about my diseases because I no longer define myself by them. I was diagnosed with Crohn’s Disease as a pre-teen, a veritable identity-molding age. I had blood tests, doctors, and insurance companies telling me that I was unhealthy and abnormal and then I had to turn around and relay that information to my friends and teachers to explain my absences and symptoms. Needless to say, it led to a lot of conflicted feelings about my identity, my weaknesses, and my strengths. And oh boy, do I have the teenage, angsty journal entries to prove it.

I have spent a lot of time and energy making sure that people do not view me as vulnerable because of my illness. At 5’3” I am already aware of my stature limitations, but I don’t like the idea of that people assume less of me because of the cards I was dealt. What might be intended as sympathy can come off as pity. But therein lies the rub. Having a disease does make things in life harder. It can be painful, exhausting, frustrating, and embarrassing. A disease is a stressor both to the inflicted and those around her. I hate that I have been such a financial burden to my parents, though they would not think twice about it. And I can’t even count the number of times I’ve had to cancel or postpone plans with friends because of sudden symptoms. A good excuse or not, my disease’s negative repercussions don’t make me feel stronger as an individual.

So what does make me feel positive about my illness? I like to think it had a pretty big effect on how I choose to live my life and interact with people. Rebecca Chapman and I first at a camp for children with Crohn’s Disease and Ulcerative Colitis. We were 13, newly diagnosed, and terrified. But being around other children with these illnesses alleviated my anxieties and let me just relax, have fun, and be a kid. I returned every summer to the Painted Turtle Camp until I was old enough to volunteer – and I still volunteer with them to this day. The Painted Turtle Camp’s mentality and values alongside my experience dealing with an illness have made me a more empathetic and socially motivated person. In college I changed my major to Human Development and Human Rights and in the future I’d like to work in the social justice sector. I’m even leaving in a few weeks to go volunteer in Buenos Aires, Argentina for three months with a children’s rights organization.

I guess that’s when you know that you have wonderful friends and family – when they can joke about your incurable illness without making you feel like less of a person.  The gollum-esque creature I like to think of as my negative symptoms is my friend’s interpretation of my disease. She talks about Crohn’s Disease with absurdly anthropomorphic phrasing. According to her my “immune system hates me and therefore has declared a mutiny” on my bowels. My brother has mentions my “pill popping habits” loudly when I pull out my medications with breakfast in public. Having an illness can get a little too serious. I’m glad I have people to help me bring a little levity and laughter to the matter.

Nelson Mandela said that, “it all seems impossible until it is done.” Now, I’m almost 100% positive that Nelson Mandela didn’t have Crohn’s Disease, but lucky for me his message still applies. Having Crohn’s Disease and Fibromyalgia is a pain, quite literally. But I try to give myself a break while still moving forward. Having wonderful people in my life who inspire and love me keeps me positive, happy, and healthy. They not only remind me to take my pills and avoid popcorn, but that I am human and allowed to be a little vulnerable.

Keep up with Eliot on eliotdreiband.wordpress.com