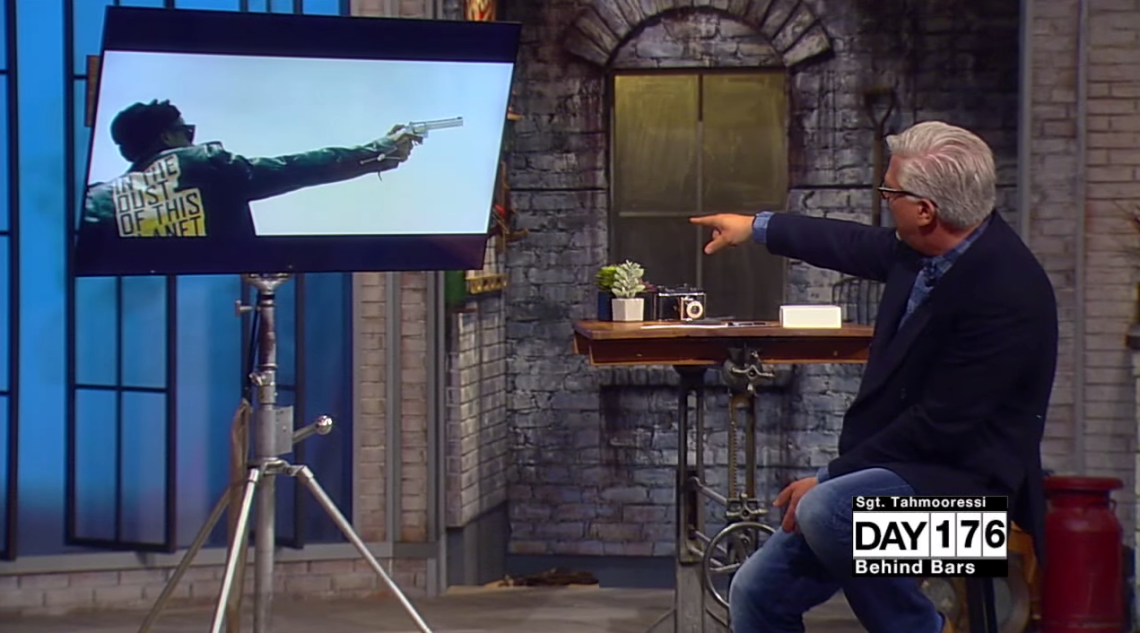 When Glenn Beck heard that Jay-Z had sported a leather jacket with the cover of Eugene Thacker’s book In the Dust of this Planet stenciled on the back, he got mad. That’s his thing after all, it’s what Beck does.

In this case one of his interns sparked the anger by informing Beck that the book on Jay-Z’s back was about Nihilism. Now Nihilism, as a political movement, dates back to 19th century Russia and I’m sure that this marked the book, in Beck’s mind, as just one more pawn moved against America in a centuries long commie plot. For Beck the word Nihilist is code for “progressive” and the word “progressive” is code for “nihilist.”

All of this is exactly what you’d expect from Beck, but what might be easy to miss as you watch this paranoid version of Romper Room is how self-contradictory Beck’s rant really is, and how he himself brushes up against nihilism as he plays connect the dots.

The problem is that Beck’s 12 step version of Christianity brings along with it a conviction that humans can’t be trusted to think. This along with his weird embrace of Thomas Paine demonstrates that self-contradiction and irrationality are no problem at all for Beck. Only in a world that is fundamentally mad can a revolutionary like Paine be used as a mouthpiece for religious nut like Beck, but from Beck’s own perspective his actions are consistent. After all, the world may be mad, but it’s also God’s creation. And given the fact that God doesn’t want us to think why should we?

Regarding Nihilism, those who dare to actually read the book Jay-Z wore while biking across the desert will discover that Thacker, who consciously embraces the label of nihilist, likes to think so much that he’s reached thought’s very limits.

Consider this excerpt from In the Dust of this Planet:

What’s going on in this passage is that the self-proclaimed Nihilist is, in truth, laying out the foundation of Immanuel Kant’s ethics. In Kant’s Critique of Pure Reason the philosopher marks the limits of thought, figures out just what it is that we can’t know and where the line is between say the noumenal world and the world as it is for itself, in an effort to proceed to what we can know and what we must do.

The joke here, other than Beck’s stage persona, is that it’s Beck with his jibber jabber and sentimental love of nation, God, and conservatism who is the real skeptic, the true relativist. The joke is that Beck’s trust in God and Nation is just a bad cover for his belief in the power of his own voice while it’s Thacker who is asking us to think, and more than that, to feel.

More specifically he is asking us to think about our feeling of dread.

Thacker tells us that “what genre horror does is it takes aim at the presuppositions of philosophical inquiry – that the world is always the world-for-us – and makes of those blind spots its central concern, expressing them not in abstract concepts but in a whole bestiary of impossible life forms – mists, ooze, blobs, slime, clouds, and muck.”

These blob monsters and mists stand in for the unthinkable, for unreason, according to Thacker, but by approaching these things as horrors the reader finds herself able to think the unthinkable after all. And that’s what drives Glenn Beck into his fits of rage. Not the dread, not the nihilism, but the way turning our attention toward what is horrible we may, in the end, be able to think of something new after all.

In Defense Of Tomi Lahren (Part 1)

The Scariest Part of ‘You’ That Almost Nobody Noticed