That’s one of the reasons I’ve spent the better part of the past two years trying my hand at developing a mobile app. To be more precise, I’ve been working with a team of developers to bring into the digital age a card game that dates back to at least the Second World War, and perhaps earlier. Starting this week, I’m pleased that it is now going to have a new life thanks to modern technology.

My involvement in this game — an incredibly devilish version of solitaire — starts with one of the greatest leaders of the 20th century at one of the most tumultuous times in world history. This is that story. 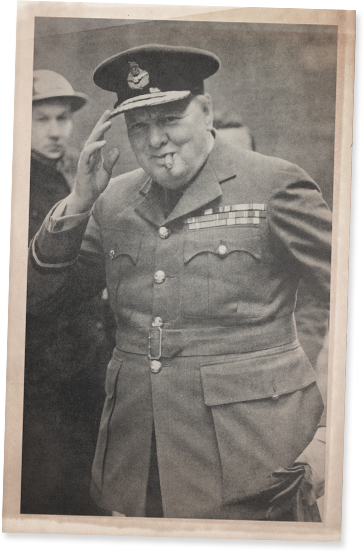 On May 10, 1940, Nazi tanks overran Belgium. Hitler’s invasion of Western Europe had a number of consequences. One was for a man named Winston Churchill to become Prime Minister the day after his predecessor, Neville Chamberlain, resigned in humiliation. Another consequence was to force into exile a young Belgian government aide named André de Staercke. As they plotted to turn back the Fascist tide, De Staercke came to know Churchill under incomprehensible stress: the Luftwaffe’s nightly bombing raids of London, an America reluctant to be dragged into another world war, and an entire world that looked to be on fire.

Winston Churchill, then in his mid-sixties, was opinionated, forceful, and determined, and ever ready with a colorful quip. Once a young photographer told him that he hoped he’d be able to shoot Churchill’s picture on the prime minister’s 100th birthday. Churchill immediately replied, “I don’t see why not, young man. You look reasonably fit and healthy.”
Churchill appreciated many things — a good book, a bottle of scotch and a cigar, games of all kinds, and perhaps above all else, a keen mind. He found that last quality in young André de Staercke, then in his late twenties, who became something of a protégé to Churchill.

I have no doubt that Prime Minister Churchill taught André number of things — but the one thing I know about for sure Churchill taught him was how to play a uniquely challenging game of solitaire. I know this because I met André de Staercke some thirty years later in 1973, after President Richard Nixon nominated me to serve as the U.S. ambassador to the North Atlantic Treaty Organization (NATO), and de Staercke, then an esteemed senior Belgian diplomat at the NATO headquarters in Brussels, taught Churchill’s game to me.

I can remember de Staercke sitting across from me on a plane somewhere over Europe playing the curious game, dizzying columns of miniature cards arrayed on the table between us. I asked him what he was playing and he proceeded to tell me the origin of the game he called Churchill Solitaire after the man we both very much admired, and the diabolical rules that make it the hardest game of solitaire — and probably the most challenging and strategic game of logic or puzzle — I’ve ever played.

Most people have played some version of Solitaire in their lives. The Churchill version, like the man himself, is far more demanding and complex. Instead of using a single deck of 52 cards, Churchill Solitaire uses two decks. Instead of the traditional 7 rows of cards, there are 10. Instead of simply moving cards so that they fit back into single-suited piles from Ace to King, Churchill Solitaire includes an extra row of six cards — the Devil’s Six — that a player has to liberate as well.

Churchill Solitaire is not a game for everyone. It takes patience and perseverance, cunning and concentration, and strategy and sacrifice.

It’s a card game that can frustrate even the most skilled player because a single move can make or break an entire game. A number of hands are simply unwinnable. But the most steadfast players will gamely soldier on to find their way to victory.

As my friend Andre de Staercke once put it to me, “What one needs in life are the pessimism of intelligence and the optimism of will.” Play a couple hands of Churchill Solitaire, and you’ll know precisely what he meant.

Over the ensuing four decades, I played this game with two miniature decks of cards across a wide table, in much the way I envision Churchill playing it (except without the cigars and the Red Label.) On long flights across the world, or when I found a quiet moment at the end of a busy day, I would clear my mind and refocus by playing a few hands of the game. I’ve found it helps improve concentration and sharpens instincts. To succeed in Churchill Solitaire, you have to envision a variety of scenarios and think a good many moves ahead.

Up until a few years ago, there were probably a dozen or so people in the entire world who knew how to play this game. These were mostly people I taught the game to — my wife, Joyce (the second best living Churchill Solitaire player I know), our children, and some assorted colleagues and friends. That was it. Winston Churchill was gone. André de Staercke, as well. And I knew I wouldn’t be around forever. There was every chance the game Churchill so enjoyed could be lost to the ages.

Then I was approached about turning this game into an “app.” I can’t say I had much of an idea of what an app even was. I had played the regular version of solitaire on my iPad, but turning Churchill Solitaire into an app of its own wasn’t something I’d ever envisioned. It wasn’t something I was sure the Churchill family would even want us to contemplate.

In January 2014, I wrote a letter to Sir Winston Churchill’s great-grandson, Mr. Randolph Churchill. I had known Randolph’s father during my days as a diplomat. I told Randolph the background of the game, my interest in calling it “Churchill Solitaire,” and wondered if the Churchill family would have any objection.

To the contrary, the Churchill family was enthusiastic about the idea — Randolph called it “a marvelous way to bring this back to life”— and they agreed to lend their name to it as well. This is not a profit-making endeavor on either of our parts. The Churchill family’s profits from the game, like mine, will go to charity.

Since we began our partnership, I’ve reviewed wire frames and branding guides. I’ve spent countless hours on beta releases. I’ve signed off on something they call “UX.” I’ve put the game through its paces, offering suggestions and ideas to make it as closely resemble the game Churchill played.

After 172 builds — thousands of lines of code each — we have arrived. I am now officially in the app business.

What motivated me to push myself into the tech world was simply the fact that I thoroughly enjoy the game. My wife, Joyce, and I play it against each other regularly, keeping score — she might not want me to disclose that I’ve been leading her over the past several years — and more recently, with the app, comparing our relative skillfulness by trying to win the same hand. We both tend to be believers in the simple, Churchillian tagline for the game: #NeverGiveIn.

Churchill Solitaire is a game that is a host of contradictions — simple yet complicated; frustrating yet fun. Now it lives on for a new generation — a fitting tribute to a great man. And starting this week, it is available to the world on the AppStore and will soon be coming to other platforms.

I can’t say if this is the last app I’ll ever be involved in — after all, I’m only 83! But it is safe to say that Mark Zuckerberg has nothing to worry about.

40 Free Apps That Won’t Cost You A Penny

10 Things That Will Hopefully Clear Up My Life

5 Anxieties Unique To The Digital Age