There is no other experience like protesting for civil rights.

When my girlfriend and I had heard about this demonstration weeks prior, we knew we had to go. It already sucked enough to be deeply bothered by something when also feeling completely powerless towards doing anything about it.

But this time would be different since day-by-day, the air starts to ring more strikingly familiar to the civil rights era of the 1960’s, than ever before.

Leading up to our trip down to Washington, we couldn’t escape the criticism from our peers. Friends of ours told us that going to protest the pipeline would be a waste of time and that it wouldn’t change a thing. Some family also weighed in on “the useless trip”. But of course, that didn’t stop us from joining the march.

For the record, demonstrations are totally impactful. Historically, when presidents are unpopular for inaction during national rising movements, it is the large demonstrations of people that prove to the entire country, that the nation is displeased with their president’s policies or lack thereof. This usually is enough for it to dawn on the sitting administration that they are single-handily stepping in the way of what the majority of the people want.

(Given, this is back when the media was honest and reported a growing movement to the American people)

On the way there, we were giddy with anticipation. We were excited to join the march and to add our voices to the support of the disparaged Sioux tribe of the Native American community, although the weather would be super ugly.

We pulled into a parking garage and ran to the march where there was already countless people already standing in the freezing cold. We were so excited to experience this movement in person and meet like-minded people. But when we arrived at the end of the line, the vibe was awfully peculiar. 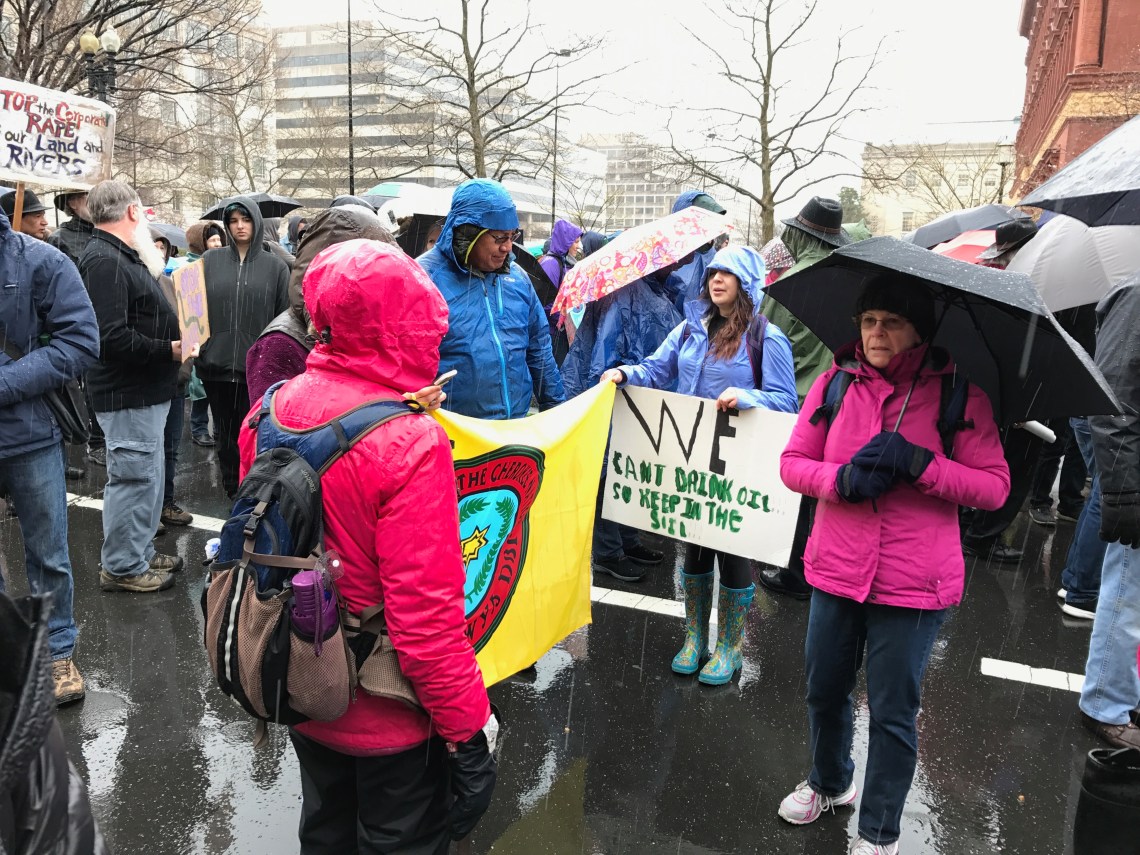 We were confused to what exactly was going on. We had assumed people were patiently waiting for the march to begin. So we followed along. Confused by the quiet tone, it suddenly dawned on us that these people were miserable. The conditions were terrible but to them, it didn’t matter.

The sound of a distant drum roared in the background while everyone shivered in silence.

The energy was heavy, similar to the sensation of mourning. Yet slowly we began to walk forward and begin the march, one step at a time, like people do at a funeral service. Our expectations were fleeting by each second as we realized this was not going to be fun. In fact, it was going to be extremely challenging.

Halfway through the March, we bumped and into and greeted Jordan Chariton, of the Young Turks who was reporting the protest with his field team. In fact, they were also the only form of news media in sight. Truth be told, there was hardly any mention of it in the mainstream media at all. It was a complete media shut out for this march. Although, at the peak of the demonstration, social media had spread it around enough that it reached the number one trending topic on Twitter that day.

As we marched through the streets with onlookers staring at us among the flock of protestors, the Native American chants took over the silence.

“You can’t drink oil, keep it in the soil,” “water is life” and “kill the Black Snake” were among the chants. “The Black Snake” specifically being a symbolized representation of the pipeline itself. (According to Hopi Indian folklore, there is a prophecy that predicts an eerie future of the land of America: “should the black snake be allowed to cross these sacred lands, humanity will suffer greatly. The end of the 5th world will quickly become, inevitable.”) 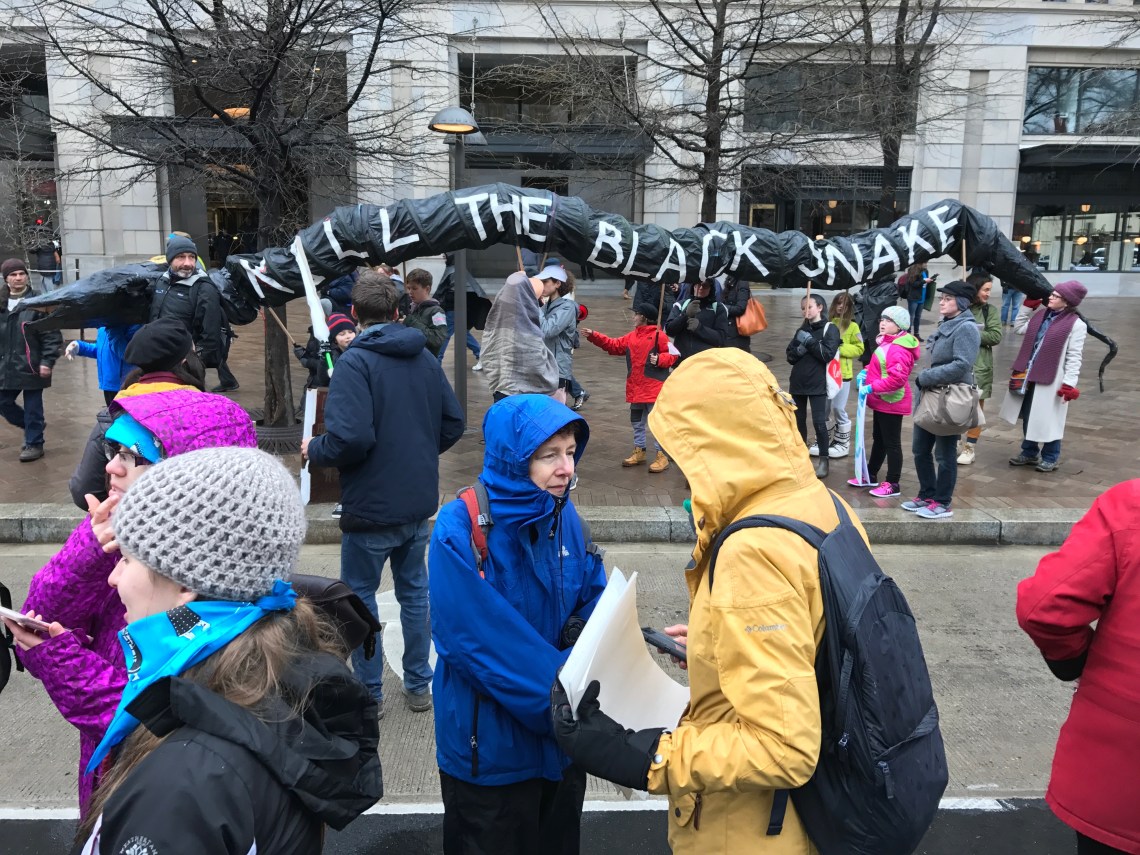 It was a powerful sight to see vastly different people of all colors, joined in unison for Native American chants, and it was honestly, very moving.

The people of the Sioux tribe have been fighting to defend their land for months. And now that they have been kicked off the sight of the pipeline construction, their voices were silenced. So it was this protest, which was one of their last chances to show to the nation that they desperately needed our help. Despite the hailstorm and the freezing temperature, people showed up to stand with Standing Rock.

After about an hour and a half of marching, we finally reached the end of the protest, right outside of the infamous house on 1600 Pennsylvania Ave. The very building that President Donald Trump was inside of, somewhere, probably listening in on the distant chants and drumming.

Snipers stood emotionless on top of the White House, staring at the lively masses from right across the gate. Security guards along with secret service police stood dead in their tracks with large guns. It was a cold finish for what started off as an inspiring and collaborative day effort, but it gave me a hard look at the big picture. I started to understand the nature of what we were up against:

For starters, there were plenty of obstacles that told us that our efforts were a waste. The shivering cold, our skeptical peers, the bystanders pointing at us standing out in the cold, and the White House, standing intimidatingly objective to this moving moment. This was not a popular demonstration in the realm of the masses by any means. But it was the heart of the movement that justified it all.

On a basic level, it would just appear like a couple of hours of marching but internally, it felt like hours and hours of fluctuating emotion, that struck a transformation deep within us. It felt like before the protest, this movement was externally “out there,” detached from our identity and apart from our direct experience. This was a public movement that had mainly been spread online and hardly affected our lives at all. But by standing with these people in hopes of making a statement, made us truly apart of the movement. This was real.

By being in the fight, in person and in Washington D.C., it also dawns on you that this is a battle and not an amusement parade. It’s an odd and contradictory sight to witness a motorcade of people fighting for their rights in front of the very building that promises it stands up for the rights of all Americans.

I hate to sound cliché here, but there really is no experience like joining a civil rights fight. It’s literally like offering yourself in aid to something that deeply troubles you and so you join in on the efforts to make a statement. And it sucks. It physically feels like community service. And when you’re forced to face all of the obstacles that tell you that you are not being rational, it can be very demoralizing. I could almost say that it’s the same feeling of being bullied in middle school when no one cares how you feel but the bully is popular, so there’s no taking them down.

It’s an uphill battle and there will be no handouts or trophies. But the accomplishment is spiritually rewarding.

So this article is a nod to the naysayers who say marching and sticking up for what you believe is right, is a waste of time. The benefits may not be instantaneous and lavishing. But you will finally know what it feels like to immerse yourself in something much bigger. You will finally experience what it means to be a human being.

And to those who already know this and have been planning on joining a demonstration themselves, go for it. You have nothing to lose and everything to gain.

The more of us that stand up, the harder it will be to silence us. So go stick it to the man.

People are depending on you. 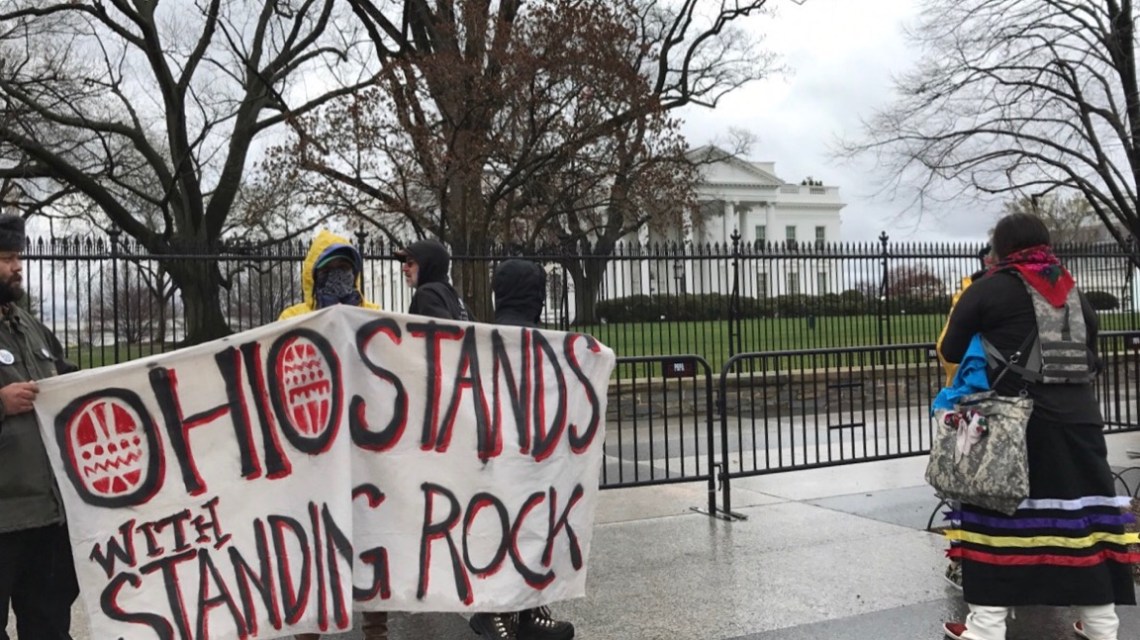 It’s January Again And I Still Think Of You