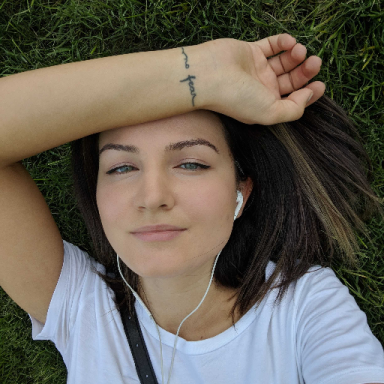 When I was 12 years old, I remember deciding to stay up late one night.

I didn’t want my parents to catch me, so I waited until the only sound in the entire house was the fridge humming downstairs.

It was go time.

I picked up my yellow walkman, careful not to drop it and blow my cover. I put my headphones on and static filled my ears. Then upbeat dance, then static again, as I tuned through radio stations until I found a good beat.

The next step in my rebellion was to stand up on my bed and look out the window. I didn’t know what I was looking for, but I knew I was disappointed by what I saw: empty walkways snaking by identical townhomes in a rental apartment complex. I must’ve been searching for a home that was 4,500 miles away, because soon after, tears rolled down my face.

It had only been a month and a half since my family moved to Canada. My parents fit their life in Romania into eight suitcases, and dragged my brother and I with them, all for the promise of a better future. They did this for us, they said. My brother was only a year old, so he doesn’t remember the transition.

I remember being placed in Grade 7, even though I barely completed two months of Grade 5 back home.

I remember my first day of school, when three boys came down to the office to escort me to my classroom. The excitement on their faces as they asked the secretary where the “new girl” was and the shift to disappointment as they turned their heads and saw me, a girl with a boy haircut, fringed leather vest, turtleneck, mom jeans (before they were cool), and clunky army boots. I felt so ugly in that moment, I vowed to grow my hair and never wear those clothes again. The logical thoughts of a 12-year-old.

I remember struggling to speak and understand the language. For the most part, my English lessons came from Cartoon Network, but the words “ghost” and “Scooby-Doo” weren’t practical in day-to-day conversation.

I remember going home for lunch every day because I didn’t want to eat alone in the cafeteria. My grandma’s smile and warm food were better friends anyway.

I remember not telling my parents any of this, because they seemed stressed out enough on their own. They were running a race called Finding Jobs Before They Ran Out of Savings.

Standing on my bed. Staring out the window. Like a tiny alien looking out from a spaceship, afraid of how life worked on this planet.

Until a song came on the radio that caught my attention.

I couldn’t understand the words, but I loved its energy. I got hypnotized by a loop of violins in the background. There was no announcer this late at night, so I didn’t catch the name of the song or the artist, but it soothed me and I finally went to sleep.

I woke up humming the violin loop.

I stayed up the next night, crying and hoping I would hear it again. Like clockwork, the station played it. I did this every night for what felt like six months, and sure enough they played the same song every night.

Eventually, I made my first friends in ESL class. I stopped going home for lunch and my nightly ritual faded away. I paid attention to what was cool, what was not, and Operation Fit In was in full effect.

Then a few years later, I heard the song again. This time, I understood the lyrics and heard the title and artist.

Turned out, my soothing lullaby was none other than Juvenile’s rap classic “Back That Azz Up”.