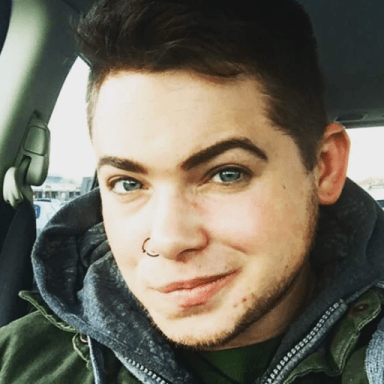 Like many Americans, my relationship with my body is difficult and complicated. I’ve gone from spending almost all of the time completely disassociated from my body to finally accepting it most days and even – shockingly – loving it sometimes. The road to acceptance has been difficult and took hard work. A year ago, I had a breakthrough. I finally underwent gender affirming surgery.

A running childhood joke was that I never looked directly into the camera when photos were taken. I would always be photographed with my eyes cast down or to the side. It was laughed off as a quirk. Years later, I realized it was because I didn’t want to be photographed. I hated how I looked. My body was a prison, a source of shame – even as a young child.

Many people in the United States struggle with body image. Whether the struggle is based on weight or appearance, or due to psychological issues such as surviving sexual assault, abuse, dysmorphia or dysphoria, I am certainly not alone. I was assigned female at birth, and as anyone who was similarly socialized as female will tell you, gender plays a massive role in how we view our bodies. And the messages we receive from our culture is that we are never good enough.

On top of broader cultural messaging, the Evangelical bubble I was raised in led me to believe that it was completely normal to avoid looking in the mirror and to take showers with your eyes closed. Was it not normal to feel the grip of panic and fear every time you changed clothes? Every adult I knew spoke of how bodies were sinful and full of evil. The most positive thing I heard about bodies was that they carried our souls and would one day turn to dust. No one ever told me to specifically hate my body in so many words, but no one ever spoke positively about bodies either.

When I was older and married, I found survivor communities and for the first time in my life, didn’t feel alone. The other members of my community kindled a faint ember of hope that maybe one day I could look myself in the mirror and not become overwhelmed with revulsion. Knowing that my relationship with my body was not healthy wasn’t enough. I wanted to fix it. I wanted to heal and to maybe one day love the only body I had.

As I began to dig at the root cause of why I hated myself, I found that it wasn’t just a singular reason. It was a whole mess of intertwining issues. It was like trying to untangle a ball of slimy yarn – hard to grasp, interconnected, and gross.

In therapy, I came to the realization that what had happened to me as a child was sexual abuse. It was a relief to finally name that beast that had been circling the waters of my subconscious. The abuse had been compounded and kept hidden by the toxic, cult-like Evangelical world I was raised in. It had been ingrained in me since I entered this world that I had no autonomy over my own body. I did not own my flesh. It was lent to me, and it was faulty and inconvenient and inherently bad. This line of thinking was pervasive and reinforced over and over again to extreme degrees.

One of the ways that my therapist and I agreed would help me learn to accept my body more and hopefully help me disassociate less was to assert ownership over my body. I wanted to start small – getting a short pixie I’d always wanted but was never allowed to have, piercing my nose, getting a tattoo. And learning to enjoy sex.

At the time I was married. I approached my then-husband and suggested we try new things, such as incorporate toys. I wanted to learn to enjoy my body and my skin. He refused and told me I was “fucked up” for wanting to try something other than strictly penis-in-vagina sex. He told me in word and deed that I disgusted him.

Each step I took to assert ownership over my body was met with more disgust and ridicule. When I finally worked up the nerve to get the short haircut, even though I was beaming in the hair stylists’, my husband told me he was embarrassed to be seen in public with me. I wore a beanie for a week after that to avoid more ridicule. He said a tattoo would make me hideous. The more free I became, the less we had sex. I developed an eating disorder. I still avoided mirrors.

Finally, in autumn of 2014, I had a breakthrough. I stumbled upon a word that pulled my life into sharp focus. Suddenly there was breaktaking clarity where before there had been a haziness framing my existence.

This knowledge changed everything. It was the missing piece in my identity and my understanding of who I was and where I fit into the world. Slowly I began taking steps towards transitioning, as I researched what it would take and how it would look. I ditched the ex. I had fantastic sex. I started looking in the mirror for a little longer.

When I first started considering surgery, I was asked if I knew that it wouldn’t solve all of my body issues. At the time, there was still a great deal of dysphoria and I had regressed in some of my habits. I was told to love myself for who I was and love the body I have now. After all, a good portion of my body issues were a result of things not related to gender at all – such as the sexual and emotional abuse. Those things affect neural pathways and perceptions and require healing through therapy and adjusting thought patterns. Healing takes time and hard work. Surgery isn’t a quick-fix.

And I took that suggestion seriously. After all, by the time I decided on surgery, I had become a radical self-acceptance champion. I cheered my friends on and encouraged them to love their bodies as they were. I spent countless hours in therapy and support groups and talking to friends trying to change how I perceived bodies – especially mine. Weight gain no longer sent me to racing to the bathroom to throw up. I started eating more than 600 calories a day. I’d finally gotten tattoos in order to claim this body as my own – something my ex husband had forbidden me from even considering. I tried to accept my body but there was still this disconnection from it. I wanted – needed – surgery. But I also worried that I was a hypocrite for wanting surgery when I strongly believed in accepting and loving bodies where they were. My mantra for me and many of my friends was “Every body is a good body.”

Eventually, though, the dysphoria was just too much and hypocrite or not, I went ahead and pursued it. On September 21, 2017, I finally had gender affirming surgery.

It took a year for me to be able to write about it and fully assess the impact it’s had on my life.

Having surgery didn’t fix my body issues. But what it did do was let me inhabit my body so that I could finally begin true healing.

There are still remnants of thought patterns and old habits lingering in the pathways of my mind that I am working to address. Twenty-five years’ worth of uninhibited messaging about how awful my body is takes a lot of work and time to overcome. Negative thoughts about myself are old habits. And old habits die hard.

But they do die. And I am nothing if not persistent and resilient.

All that work in therapy I had done previously was held back because it was almost like I was working to change from the outside. I didn’t own my body. It felt like I was trying to fix someone else’s home. My efforts were half-hearted.

Once I had surgery, I was finally able to move in and call my body mine. I could begin to heal and renovate from the inside out. I suddenly wanted to do the work necessary to heal completely because this was my body. It is my body. It isn’t perfect, but by goddess it is mine.

For the first time in my life, I can look my own reflection in the eye and say: I’m home.