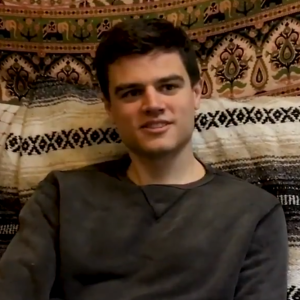 Hey there! My name is Davidson Boswell and I have to write this article quick as I am typing it out on the library computer. I already used the first 20 minutes of my computer session to, shall we say, appreciate Marge Simpson, so I only have 10 minutes left to extol the virtues of my libertarian lifestyle before they call security on me. I wanted to type out this cute lil’ manifesto on what libertarianism means to me before I go find a kindly college student that will buy me enough pure-grain alcohol put me to sleep on the bus. Haha.

As a libertarian, I firmly believe that the world should be a punishing, almost impossibly cruel, place. A post-governmental paradise where, if you fail, you have nobody to blame but yourself, because, after all, it was your choices that got you down onto that park bench to sleep.

When you are a Libertarian, you don’t experience any sense of existential dread, or even anxiety because nothing in this world is out of your control. And in this fundamental truth, there is comfort. I am homeless (by choice), straight (by choice), and heavily armed (by the grace of God). I live in a cemetery (by choice) on the outskirts of town and take the city bus in to write these defenses of my lifestyle on word documents at the library which get immediately erased when my session runs out.

I guess if I was you, I would be wondering, well gee Davidson, when did you decide to be straight? And to your question, I say, great question. I remember the year I decided to be straight. It was 1998 and I told my Dad that I felt “kind of funny” at the beach house when I saw Uncle Jesse from Full House for the first time. After he made me eat a fair amount of soot from the fireplace while looking at more pictures of John Stamos, I decided to be straight. It was a decision I would have to make again and again each summer after I got back from the Mormon summer camps.

The next decision I made was to be permanently armed. College didn’t pan out because my mother decided to get breast cancer and I decided to join the army make money for her hospital bills. After spending many a crazy night in tents in the Kurdish controlled part of Iraq clutching my M16 praying to God for him to end it all, I decided that I would never be without a weapon again. As I type this, I can feel my handgun resting loosely in my sweat pants and my bowie knife poking me in the thigh. I stay “strapped” as the kids say! Haha.

The last, and probably most difficult decision I made, was my decision to be homeless. When I arrived back home from tour in Iraq, I found some websites that helped me realize that schools are but mechanisms of the American Left to brainwash our children into blind obedience to big government. I also realized I was the second coming of Jesus Christ. After shouting as much in PTA meetings throughout the school system, the state of New York, along with myself, decided for I needed to go on medication. Now, people will say that this was “mandated as a condition of my parole,” but don’t believe them, it is Clinton funded propaganda.

After I took the medications for a while though, I decided that I did not want to take them anymore. I decided to do this. It was not because my government insurance ran out. This was around the same time I lost my house. Now, I won’t bore you with the details of losing my house. Suffice it to say, some people take exception to unilaterally deciding to take your entire neighborhood off the electrical grid with a pair of pliers.

Well, I have always been bad about wrapping these word documents up. But based on the whispers I hear around me people are growing concerned about the massive knife I just placed by my keyboard, so I think I will get out of here.

In summation, I am happy now. I have libertarianism and I have myself. That is all anybody ever needs.

How To Get Bullied On A Bus

44 Ambien Stories That Will Creep You The Eff Out

How To Get Bullied On A Bus

44 Ambien Stories That Will Creep You The Eff Out

If You Aren’t Doing These 17 Things, You Don’t Understand Social Media

I Want To Date You Online