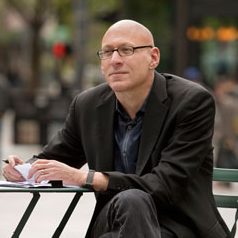 In the age of Trump, the nature of political division has reached a near maximum, surpassing even what the Bush/Cheney tandem wrought. Condescension as policy pushes much of current media and our culture. They/we fight racism/bigotry/Trump by accusing non-racists, non-bigots, and those who find Trump problematic (yet find the alternatives equally troubling) of being complicit (with actual racism/bigotry). The accusation of bigotry no longer carries meaningful weight. When “racist” describes Mitt Romney and Richard Spencer, a large percentage of the population tunes out.

These are the very dilemmas that propel David Shields’s new book, Nobody Hates Trump More Than Trump:  An Intervention (Thought Catalog, October 2018). Shields is my former writing professor; over the last thirty years, he and I have debated nearly every artistic, culture, and political issue. In 2015, our book, I Think You’re Totally Wrong: A Quarrel, was published; the film version was released by First Pond in 2017. Perhaps this is why I’m impressed by this book, which deconstructs not only Trump but also many of the shibboleths of the left. Kirkus Reviews calls it “a compelling book offering something to offend nearly anyone.” Shields and I met in Seattle in early 2019 to discuss the book.

Caleb Powell:  To me, this book is about human nature—narcissism, bullying, cruelty, and what I’d call today’s partisan (selective) nihilism. Could it have been written about Trump?

David Shields:  I know what you mean. People have always been writing about those things. Petrionius’s The Saytricon comes to mind. That said; I would never have been catalyzed to write it without Trump as the overarching figure.

Powell:  The Trump you write about comes across as a self-hating narcissist. How is this possible?

Shields:  I think of Trump as a dry drunk. One of his brothers died as a result of his alcoholism. Trump claims to have never touched a drink in his life. Every drunk is a self-hating egotist. Most narcissism is built on a clear foundation of self-contempt. Seems important to understand how wounded Trump is. He is dead man walking.

Powell:  You emphasize that Trump was a bully in his childhood. Why is this important?

Shields:  See above. Behind every bully is a baby dying to get out. It’s hard to see Trump’s bullying as anything other than “paying forward” his own father’s bullying of him. Many Americans—many people—love to be pushed around.

Powell:  You build an argument, at first subtly and then more overtly, to undermine today’s neo-political correctness. More than one writer has said that Trump’s victory was partly due to PC backlash. Do you agree and to what extent?

Shields: I agree to the extent that Trump is the perfect “Reality Hunger” candidate/president. Against the empty rhetoric of the chattering class Trump’s brilliant punk performance art comes across as “authentic.” Writing the book, I came to realize that I’m a radical conservative or whatever Mailer calls himself in the interview that he did w Martin Amis and that I quote. I believe in progress, but I have a dire view of human nature.

Powell:  Germaine Greer said that if you’re born with a penis, you’re a man. Roxane Gayresponded by calling Greer “bigoted and full of hate” for not acknowledging “transgender women as women.” Whom do you agree with?

Shields:  Will think about that one. Do you know David Plante’s book Difficult Women—about Greer, Jean Rhys, and Sonia Orwell. Quite great.

Powell:  I’ll have to check that one out. In the chapter “28 Reasons Why Trump Will Be Re-Elected,” you mention an educator who recommends that parents ask for babies’ consent before changing their diaper. Why do so many adults not only put up with this silliness but actively promote it?

Shields:  They’re afraid to face their own feelings, which they mask in pabulum (hence Trump’s appeal).

Powell:  You quote Richard Spencer fearing “the end of the white man.” On Twitter, a minor brouhaha erupted when Amy Siskind Twitbragged, “I will not support white male candidates in the Dem primary.” Why do you think identity matters so much to the Amys and Richards of the world?

Shields:  They are completely lost in a world drained of meaning and are seeking a panacea to bury their sadness. On narrow political grounds, I may agree with Amy S. I’m not sure a white male candidate is the person to galvanize anti-Trump blocs of voters.

Powell:  Point taken. How threatening is the white supremacist/Trump axis?

Powell:  You tie Tyler Hilinski’s suicide to his football coach, Washington State University’s Mike Leach, who is, in your words, “a notorious bully and sadist.” How might Leach have played a role?

Shields:  It’s speculation on my part, but I thought it was strange that, in the aftermath of Hilsinki’s suicide, no one discussed Leach’s infamous tirades, his woodshed punishment of players, his obsession with tyrants, his loud support of Trump. I’m very interested in the psychology of bullying. I can spot a bully instantly. Leach is one.

Powell:  You refer to Mona Chalabi’s investigation of a poll that greatly exaggerated the number of Muslims who hold Islamist views. Behind the poll was Kellyanne Conway. To promote the results was dishonest and unscrupulous. To what extent does Trump use and exploit fake news?

Shields:  To me, that’s not even a question. That’s his entire modus vivendi. It’s game theory. It’s “kayfabe”—carny-talk for hustling customers. It’s the revenge of the repressed. Trump is resentment embodied. It’s politics as theater for the dispossessed.

Powell: Trump’s sexual inadequacy connects him, as you note, to Hitler and Mao. Why do you think power compensates for such lack?

Powell:  How fine or thick is the line that separates Trump with genocidal dictators?

Shields:  Trump doesn’t care about the state per se. The line is fairly thick, in my view. The threat is real but defeatable because Trump doesn’t actually care at all. Trump is Berlusconi. He’s not Stalin.

Powell:  You claim that a Fox sports radio talk show host “badly distorts the facts” regarding Colin Kaepernick. What are the facts?

Shields:  The host, Ben Maller, is fascinatingly Trumpian. He’s funny, smart, and has co-hosts around him who are people of color. The whole show is a barely disguised reification pf our current political situation. Maller pretends that Kaepernick’s kneeling has no larger context or meaning or purpose; he just “hates cops.”

Powell:  Your former Breadloaf student Francisco Cantú wrote a memoir about his experience as a Latino who worked as a U.S. border guard. You advised him to make it more ambivalent and complicit, rather than the “easy embodiment of moral outrage” (which is how it struck you as being in its initial incarnation). Does this seemingly ubiquitous moral outrage harm today’s literature?

Powell:  In our conversation seven years ago, which became the book and then the movie I Think You’re Totally Wrong:  A Quarrel, you pushed against the insertion of politics in a work of art.

Shields:  I was trying to push back against an easy politics.

Powell:  Back then, you quoted Jonathan Lethem: “I certainly haven’t gotten anywhere close to ‘politics’ yet.” This quote appears again in Trump. Lethem questions a “falsely dichotomized argument,” which is a major thread of this new book of yours. Why does our society too often falsely attribute cynical and/or false motives to the other side?

Shields:  There are, of course, myriad reasons, from Facebook algorithms to Laura Ingraham, but I don’t know if I agree about “falsely.” I’m very skeptical of everyone’s motives, including my own. “We are a doomed species,” I write in this book.

Powell:  In I Think You’re Totally Wrong, you call George W. Bush the “embodiment of evil.” Do you feel differently now about Bush?

Shields:  Yes, I see him as the hand puppet of Cheney, who is the embodiment of evil.

Shields:  I resist the revisionist recuperation of Bush/Cheney. I agree with Adam McKay that Bush/Cheney wreaked far more damage than Trump has (thus far).

Shields:  There is absolutely no way Trump will still be president in November 2024.

Powell:  What politicians could beat Trump in 2020?

Shields: You and I could, in a landslide.

Learn more about David Shields and his book, Nobody Hates Trump More Than Trump:  An Intervention.

Keep up with David on DavidShields.com